Just a few years ago, some of the great bargains on the vintage amp market were the Valco-made Supro amps of the 50’s and 60’s. While their price has gone up for many reasons (the most justifiable one being a lot of them are GREAT sounding amps), the primary reason seems to be the Jimmy Page factor. Over the last couple of years, I’ve started casually tracking how many different models of Supro amps people CLAIM was the amp that Jimmy Page used on the first two Led Zeppelin albums. It’s a non-scientific and highly anecdotal study, to be sure, but so far I have counted NINE different models of amps that people claim (with the certainty that only stupidity mixed with arrogance can achieve) are THE MODEL that Page used.

It doesn’t really matter, of course. No one sounds quite like Jimmy Page (least of all Jimmy Page these days) and how an amp sounds on an album isn’t exactly how it sounds in a club, anyway. The difference between six inches of mic placement in a studio can make a great amp sound like crap and vice-versa. Yet, people pay through the nose for amps because they think they’ll sound like Jimmy Page if they buy them. Whatever.

But what’s missed in all this (sadly) is that there’s a reason Page dug the Supros in the first place. They sound great. Whether it’s the Thunderbolt, or the Corsica, or the Dual Tone (all claimed by various “experts” as THE AMP Page used), they, and many other models, are great sounding amps.

They are also, at this point, getting to be very expensive amps. And there’s nothing wrong with paying a grand for a Thunderbolt if you want one. They sound awesome for guitar, they’re loud enough for clubs, and they aren’t too heavy to carry. They are point to point (true point to point – not hand loaded circuit board like vintage Fenders. Not that either is better, but Fenders aren’t, technically, point to point). They’re well made, with good parts and, in general, tougher cabinets than other budget tone monsters like Danelectros.

But, some things have gone plain loco in the vintage market. Example A? People are paying over $4,000 for the Supro Dual Tone (AKA the 1624T). And while this is a killer amp, that’s just insane (unless I’m selling it, in which case, it’s worth every penny). Why are the prices so high for this model? You guessed it – it’s the latest that has been swept up by the “as played by Jimmy Page” tidal wave.

But let’s say you’re interested in tone. Not who played what. You want to sound like you, and you want a really cool amp to do it with, and you don’t have an extra 4 Large kicking around your wallet. What’s a tone freak to do?

Well, if you like the sound of that Supro (and it IS a sound worth having, no matter who owned, played, looked at or smelled the damn thing), try and find a circuit that’s similar and go from there. What gave that model Supro its unique and cool tone? Well, as they say, everything affects everything, but the main contributors to that tone machine are the pretty basic 12AX7’s in the preamp and the cathode-biased oddball output 6973 tubes. These have an overdrive all their own – not quite a 6V6; not quite an EL84. They definitely have their own thing going. Chime and midrange grit at the same time – and they’re largely responsible, I’d guess, for when people call these model Supros slightly Vox-like in their overdriven mode. 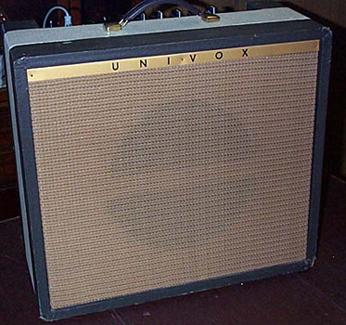 What’s an affordable, well made, very cool and not ridiculously expensive amp that’s like the 1624T? I’d say you might want to look at the Univox 202R. The early version of this amp is true point-to-point (before 66 or so, it seems – there’s not a lot of information on Univox amps). Later versions are printed circuit board, like the great little Univox U45 amps (they are mini tone MONSTERS). But the circuit and cap and resistor values stayed pretty much the same. If you can, it’s always better to find the point to point ones, as they’re easier to work on and tougher built – but the PCB ones are good amps, too. Univox amps were made in Japan (all the ones I’ve seen) – most of the ones I’ve been under the hood of were made at the Guyatone factory, and then imported to the United States and branded with various names (see below for some of the other names for this amp). 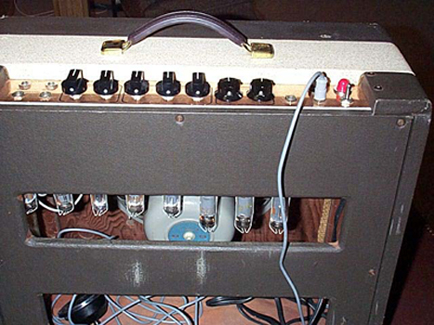 These are single 12″ combo amps with Reverb and Tremolo (both VERY nice – a good throbbing smooth trem and a cavernous verb). Chanel one has a Volume and Tone knob, plus the ‘verb and trem. Channel two has only volume and tone, but you can patch the two together for a fuller, raunchier sound. “Normal” and “Bright” inputs for each channel. Earlier models have the following tube lineup: 12AX7 (3), 6AN8, 6AV6, 6973 (2) and a 6CA4 rectifier.

I’ve seen them with ceramic Jensens that seemed original. Mine, a very early model, has a “Deerfield” ALNICO, (looks to be original) with no other markings or speaker codes (your guess is as good as mine – anyone know about “Deerfield”? Drop me a line). Most examples of the 202R have a gold control panel with big round black knobs that look like old Magnatone knobs. They are frequently two-tones, with a dark covering, then a white stripe in the middle, topped off by a handsome wheat-colored grille cloth. They’re lookers.

How does it sound? Pretty incredible. At low volumes it has a slightly dark, incredibly warm clean sound. Think of Peter Green’s tone on “Albatross.” Clean, but wooly. It can get bright, but you’ll need a Tele or a similarly bright guitar to coax that out of it. It’s got that classic mid-60’s budget American midrange-y tone to it that’s to die for.

Turned up and it really starts to release some beautiful overtones from the 6973s. These are a relatively strange output tube for a guitar amp. They were used mostly in old Wurlitzer Jukeboxes, but they make guitar amp appearances in some Supros, the awesome Magnatone 280s and 480s and a few Univox models. As stated above, they have their own thing going, and it’s a good thing at that. A very warm, yet raunchy and still creamy overdrive that cuts well through/with a band. Also, while 6973s were VERY hard to find for a while, and NOS examples were obscenely priced, Electro Harmonics is making a new version that sounds great and costs under 35 bucks a pair. The new EH tube is a lot like their highly respected 6V6 – nice and rugged with a very robust tone. So you won’t have to shell out ridiculous money to re-tube your new tone beast.

These are still available for under $400 with regularity. It will probably go up, as people find out more about the obscure brands (or, err, the MORE obscure brands) in their search for great 60’s tone on the cheap. But, even for a fair amount more than $400, these are great amps. For low volume work, they have a very impressive clean, and turned up they sound like garage heaven. Get yours now before Jack White or somebody discovers them. Or before I start a website saying Jimmy Page used it on EVERYTHING he EVER recorded! 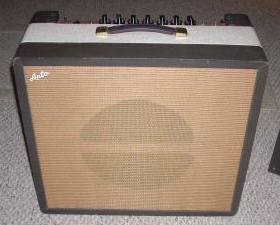 A final note about Univoxes and their various rebrands. The same amp could (and will, on eBay) frequently wear several names. There is, of course, Univox. BUT, you could find the same amp with a “Lafayette” badge. Mine has an “Apto” badge (imported to New York by the “Apto” Accordion Company). I’ve seen one that looked just like these with a Magnavox badge. So, familiarize yourself with the basic look of this model and ask questions about the tube lineup, and you may find yourself with a very cool Univox 202R. No matter what the name on the faceplate, the tone is something special. Happy hunting. 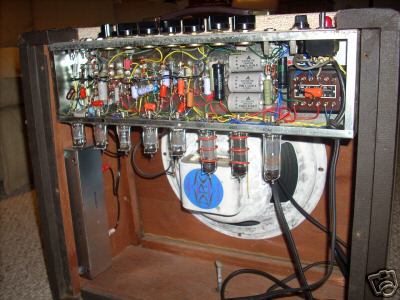 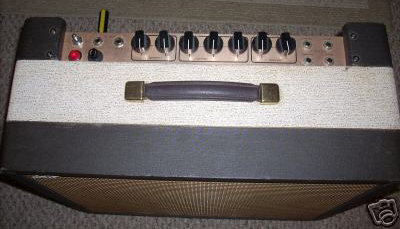