Cue the music. Duh-DUH-duh-DUH-duh-DUH-duh-DUH? Fin cuts water. Girl screams. The big Jaws open. That’s right, folks, we’re talking about sharks. Killer sharks with a taste for teens. Only this monster is a guitar! From Minnesota, no less! Well, I’m sure weirder things have floated down the Mississippi River! Yes, boys and girls, you are looking at a genuine 1981 O’Hagan Shark Custom!

I didn’t really pay much attention to electric guitars during the 1970s and early ’80s – I had my face glued to 18th and 19th Century guitar music – but I did peruse the pages of Guitar Player. It was there that I first laid my eyes on a curious guitar called the O’Hagan Shark. I didn’t think much about it at the time, but once I’d been bitten by guitar collecting, a shark immediately showed up on my radar – uh, sonar – screen. Back then, no one was looking for O’Hagan Sharks, so I had no trouble scaring one up cheap. This was back in those pre-internet days when you eagerly looked for the next catalog mailer from big dealers.

I got one in black, but I think something was changed out on it, so I swapped it for this all-original Custom. I never liked black guitars anyway. That it looked like its namesake was obvious, but what the heck had I gotten? This set me on one of those classic investigations. I got some brochures and learned that they were made in the Land of 10,000 Lakes. A few calls to local guitar dealers led me to none other than Jerrel (or Jerol, aka Jerry) O’Hagan himself, the designer of the Shark and the other guitars offered by the Jemar Corporation of the Minneapolis suburb of St. Louis Park. Jerry filled in the blanks for me.

O’Hagan had been a music teacher specializing in clarinet in the Twin Cities area in the early 1970s, and then became a music sales rep. As a rep he discovered high-quality Yamaki acoustics from Japan and in ’75 went into business importing them as Grande guitars. Unfortunately, he was just in time to see demand for acoustics evaporate. Out of that failed venture came the idea of making good, affordable electrics in the US to compete with Japanese imports. The O’Hagan Shark was born in 1979.

Whether or not the “Shark” name came before or after the design is unknown, but Jerry was inspired by Gibson’s Explorer. Again, whether or not he intended it, his new Shark was more comfortable than an Explorer to play sitting down. The notion of improving on Gibson was being pursued at the same time by Dean Zelinsky (Dean) and Jol Dantzig (Hamer) a few hundred miles down the pike in Chicago. 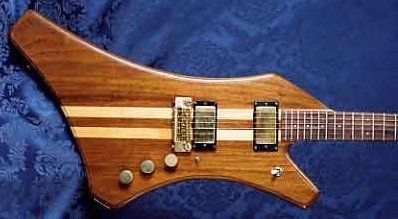 O’Hagan Sharks were a pretty good compromise between high-end guitar and affordable. They were neck-through-body and sported top-notch Schaller hardware and hot Mighty Mite humbuckers. By the time this guitar was made, they’d switched to DiMarzios. Brass appointments to increase sustain. The mini-toggle is a phase switch. Early examples often featured fancy woods, though they got plainer by the time of this guitar. Later Sharks featured Schaller pickups. Bottom line: O’Hagan Sharks are really nice guitars! Comfortable, hot, flexible. Way cool!

A number of other O’Hagan models were introduced, including the double- and single-cut NightWatch, the Twenty Two (Flying V), and Laser (Bizarro Strat). A lot of custom options were offered. Problems inevitably developed and notes were called in, O’Hagan was broke, and the I.R.S. liquidated it all in 1983.

Only about 3000 O’Hagans were ever made, most Twenty Twos. There were only about 100-150 Sharks. All are pretty rare. Sharks (and Lasers) are the coolest. With tons of bite, like you’d expect from a maneater from Minneapolis!