I have always dreamed of a guitar that would combine the features of my favorite guitars, yet be able to get many sounds from it, all of which would be useable sounds. This guitar would have to be functional, beautiful, easy to play, and affordable – the Joey Leone Signature Model Guitar for Eastwood. 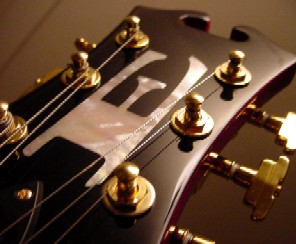 Eastwood CEO Mike Robinson and I have been working together for years – improvements on existing designs, new ideas and alike. Mike has always encouraged me to think outside the box, and in turn I have given him many ideas and concepts, some discussed and put aside, but this Signature Moded was a concept we both loved. This guitar was to be a players guitar – one that offered an opportunity for guitar players to have a wide palette of sounds to draw from – yet did not look like a crowded subway car.

OK Joey, “what does this guitar do that is so special?” Here’s where the fun begins…. First I thought about some of my favorite guitar players and the guitars they played. I tend to think of guitars and players in groups, organized by styles and tones. Hmmm? Matt Guitar Murphy played an ES 345, T-Bone Walker played an ES-5 Switchmaster, Mark Knopfler a Strat, Roy Buchanan a Tele, double hmmm? Pickups?A triple hmmmm? 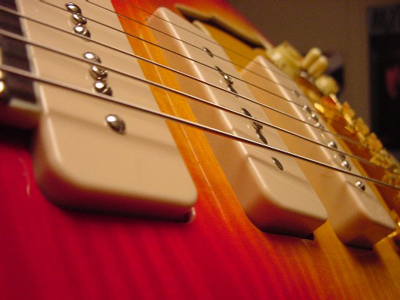 I knew I wanted my first design to be a versatile guitar that would be a clean, and clear voiced guitar that could be played at a low volume and still be strong sounding, but also one that would sing and sustain at higher volumes. I wanted the guitar to cut through with a high mid voice that would be there even when mixed at lower volumes. Here’s how I did it!

First I decided to go with a semi-hollow archtop design like a 335, but use P90 pickups. I knew that there were very few if any semi-hollows with P90 pickups. Next I wanted to have the scale length be longer then the standard Gibson, so I created a Fender scale (25 ½ inch) on a Gibson style frame. This would afford the player the opportunity to use heavier gauge strings without the hand fatigue that we incessant pickers tend to experience. Also this would make bending strings more pleasurable. 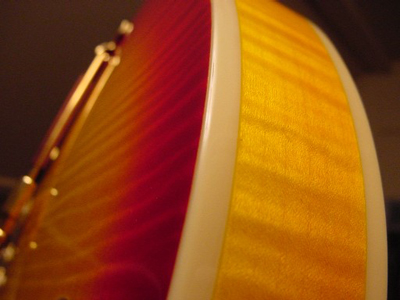 I also asked the builders to make the neck a bit wider (2 mm’s) so the strings would not feel crowded. This is the feel you get when you play an L5 or any high end archtop, again wanting to give the player a really fine guitar for his or her money. I also asked them to make me a one piece mahogany neck; this design in my opinion gives the guitar a more consistent transfer of vibrations throughout the guitar. I have always felt that multi-laminated maple necks were strong and stiff to a fault as the glue joints make the neck dead. I also never liked the idea of guitar builders gluing together piece of wood that did not have consistent grain and or density. Yes, more expensive, but Mike said, “Let’s design the guitar FIRST, and worry about cost SECOND.”

I insisted that this guitar have a book matched flamed maple top and back of similar grain and density for the same reasons mentioned above. I also added flamed maple sides as well for aesthetics mostly. And speaking of aesthetics I also wanted real mother of pearl instead of “pearloid” or some other faux material. Tell me that never drove you crazy, over $3,000 for a guitar and when you friends say, “is that real mother of pearl?” you have to say… ahhh.. kinda…..no!!! 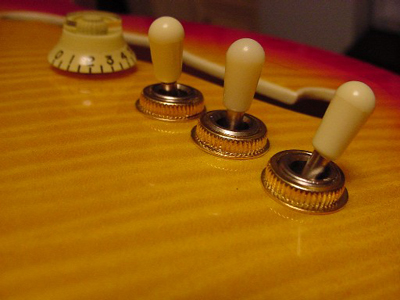 Now onto the electronics, an aspect of which I am most proud. I went to pickup visionary Kent Armstrong (son of Dan) and told him I wanted P90 pickups that would also be able to get a Strat sound as well as the standard P90 voicing. Through many, many hours of work in Kent’s workshop we came up with a hot P90 pickup with a coil tap that would yield the signature Strat sound. This is not one of those stacked humbuckers that I have always thought to be okay at best, but not having a single coil sound at all. These pickups sound great and they are potted with wax to avoid almost all microphonics. Then, three pickups like T-Bone’s ES-5 with the middle pickup reverse wound to get the humbucking sound when combined with any of the other pickups, this we did – but again through many hours of skull sessions – we made the middle pickup not only a coil tapped single coil but used AlNiCO 5 magnets like on the old 55 Les Paul Custom – but really closer to the McCarty Pickups found on the old L7 “pickups in the pickguard” design. These can be adjusted by simply pushing the pole piece up through the bottom of the pickup with a small screwdriver. This pickup when coil tapped sounds very similar to a Jazzmaster pickup but with a bit more balls. All these custom creations add expense? You bet it does, but when you play this guitar and start to explore the tonal palette, it will blow you away….

What we end up with is a guitar with 27 useable sounds – no throw away “excuse” sounds – with 9 humbucking combinations. All of this is easily accomplished by using the three full size toggles located between the master volume and master tome pots.

You will see some pictures here is this article of the first two prototypes. Production models will be available in April 2007. I’ve asked Mike to do two colors – Natural (pictured here to the left) and an Antique Sunburst (the Cherryburst will not be in production until later next year). 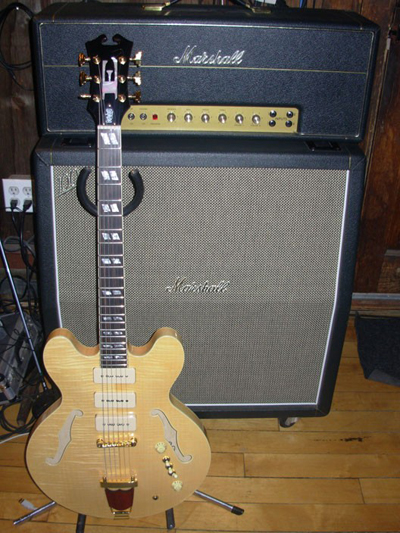 Now onto some of the other design ideas that went into the RBC model. Medium jumbo frets on a slightly curved fretboard, this will make this guitar an axe blues players as well as shred guys who are used to flat fingerboards feel at home. Add some Grover Imperial Tuners, a tunematic bridge, and trapeze tailpiece to the design of the Joey Leone Signature RBC Model, and you have a guitar designed by a player for players. No B.S.

One more thing my friends, my buddy Mike Robinson at Eastwood Guitars has been behind this guitar from the beginning and will deliver this guitar to you with his usual rock hard, unsurpassed customer service that has helped make Eastwood the up and coming guitar company out there today. This guitar will be of the highest quality and be affordable. No B.S. there either!