Back in the 1970s there was a lawyer in Madison, Wisconsin, where I was living at the time, who ran for District Attorney on the slogan “Only obey good laws.” They call it “Mad-town,” after all! (He didn’t win, despite my vote, alas.) One of my favorite “good laws” I always follow is the law of unintended consequences. In many ways, the spectacular Japanese-made 1982 Daion Savage Power Mark XX shown here was the offspring of something intended to end, or at least seriously damage, Japanese guitar-making itself… In other words, this guitar shouldn’t exist.

The event in question was the practice of copying American guitar designs by Japanese manufacturers. The Japanese hit on the copy strategy pretty early on. The American guitar industry was pretty robust when the guitar boom hit in the early 1960s. But it couldn’t meet the total demand of maturing Baby Boomers and the gap was filled by European guitar makers such as EKO and Framus. By 1966 or ’67 the Japanese had begun to copy European guitars that were popular in the US market, most notably the EKO violin guitar (itself just one of many Euro takes on the Gibson EB-0 bass). 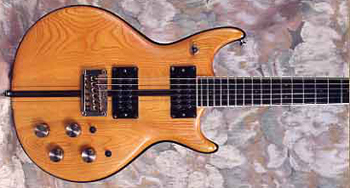 The turning point, in a delicious irony, was precipitated by Gibson. Gibson had dominated the high end of electric solidbody guitars with its ‘50s Les Paul models. Glued-in necks on a mahogany body with a carved maple top. Yum, yum! But Gibson got bored with the design in 1961 and changed the Les Paul over to what would become the SG. Contract problems with Les ended the model name soon thereafter. The SG did ok, but not as well as the Les Paul. The times had something to do with it. Gibson made nice with Les and reintroduced the Gibson Les Paul in 1968. The version it chose to resuscitate was the black-finished Les Paul Custom.

What follows is somewhat apocryphal. Meaning there’s no incontrovertible proof. Shiro Arai, the man behind Aria guitars, was at the 1968 NAMM show where the reissue LP Custom was featured. He took one look at it. Hmm. It’s a copy of the old Les Paul. Copy!!!

The first Japanese “copies” of the Les Paul Black Beauty appeared the following year—bolt-on necks and not precise by any means. But it didn’t take long for the notion to blossom. By 1974 at least the Japanese were building copy guitars that were nearly as good as the originals. Certainly as good looking, and a heckuva lot cheaper. Gibson was—understandably—not happy.

In the summer of 1977 Norlin, Gibson’s parent company, sued Elger Guitars, the American arm of Hoshino, owner of the Ibanez brand name, in Philadelphia Federal Court. The charge was trademark infringement, based on the copying of Gibson’s headstock design. The plan was to seriously damage the Japanese makers. You know, sweep into the Summer NAMM show and scoop up the entire Ibanez display. Take that! Of course, here’s where the unintended consequences come in.

First of all, Gibson hadn’t noticed that Ibanez had already changed its headstocks. In an amusing twist, they actually looked more like Guild heads grafted on Gibson guitars! No confiscations. Furthermore, Elger reached an out-of-court settlement agreeing not to copy Gibson headstocks. More importantly, the lawsuit gave Hoshino a kick in the pants toward coming up with new designs that American guitarists wanted anyway. The copy era had run its course. Americans wanted natural-finished guitars made out of exotic woods. The result was Ibanez Musicians, Aria Pro II Rev Sounds, and various very cool Westones. Not to mention Travis Beans and Kramers.

Which brings us back to this guitar, which appeared right in the middle of that natural craze. Daion was a brand that debuted in 1978, part of a collaboration between MusiConics International, Inc. (MCI) of Waco, Texas, best known as the makers of the legendary Guitorgan, and the luthier Hirotsuga Teradaira, a maker who specialized in cedar-topped guitars outfitted with brass nuts and saddles for increased sustain. The most famous product of this liaison was the asymmetrical acoustic-electric Daion Headhunter.

Daion introduced its first solidbody electrics—the Power series—in 1981 or thereabouts. There were two basses (Power Mark X-B, Mark X-B2) and either two or four guitars (Power Mark X, Mark XX, Mark XXV, Mark XXX). The Mark XX shown here (#820397) was the top of the line. This is just spectacular. First of all, it’s a neck-through-body guitar, the neck core consisting of two thick strips of rosewood with a thin piece of maple in the middle sandwiched between four plies of maple, two per side, themselves separated with a thin slice of rosewood. The wings of the body are another sandwich, this time two pieces of nicely figured ash on either side of another layer of rosewood. The beauty of the sandwich notion is that when you carve out a contour, like on the back of the beauty, you reveal the gorgeous rosewood. It would be unthinkable in these days of dwindling rainforest to use this much rosewood on a solidbody! Another law I always obey is when an electric guitar is made out of a good chuck of rosewood: buy it!

Of course there’s also the de-rigueur brass fittings and a pair of coil taps on the ballsy humbuckers. Did I mention the original green alligator hardshell case? This is sweet.

Daion actually produced several other models, including the cool Savage line, but the Power Marks are superfine examples of Japanese lathery flexing its considerable muscles following Gibson’s ill-timed attempt to put the kibosh on Japanese guitar making. They never could have imagined that their efforts to end copying would be so successful yet lead to guitars like this Daion Power Mark XX. Good name. Good law.