Hokay. You got yer Vee shape. Yer Explorer. Yer Moderne. Guild’s Gumby Thunderbird and National’s “maps.” O’Hagan’s Shark. And then there’s all those B.C. Rich Biches and things. Plus some really horrendous ideas like Kay’s Solo King, shaped like the State of Ohio! Guitars shaped like machine guns. The LaBaye 2×4 that was, well, a for real 2×4. But here, ladies and gentlemen, here, for the first time in history, I believe, we have a guitar shaped like a – razer! For your entertainment: a 1984 Peavey Razer!

I’ve always been a sucker for an unusual shape in a guitar. I love the classic lines of a Les Paul or the balanced vision of a Strat. But give me something really oddball and I go for it! So, when I came across the Peavey Razer, how could I resist?

Guitars are musical instruments. But, let’s face it, they’re also fashion statements. What you tote on stage says something about your persona. And just as fashions change from Spandex to blue jeans, rages for certain types of guitars come and go. Often tastes go in cycles. Once in awhile it comes around to weird shapes.

One such weird cycle occurred in the early 1980s. In fact, the period from around 1983 or so until about 1985-86 may have been the golden age of weirdness. Wierdness was present in the ’60s, but it may have been as much a product exuberant exploration as response to demand. The ’70s were dominated by the conservative designs of Gibson, for the most part. Models like the Iceman or Moonsault were more anomalies than anything else.

Exotic guitars were the stuff of metal. In the late ’70s serious rock fans abandoned classic metal and arena rock for punk. Pop rock fans opted for New Wave. While the latter had some darned good guitar playing at times, it wasn’t really guitar-oriented. Then in the early ’80s metal caught on in Europe and the U.K. What was called the New Wave of British Heavy Metal spawned a host of guitar-oriented bands. Many, like Germany’s Michael Schenker, liked Vees or Explorers with fancy graphic paint jobs. The music was in your face. Guitar solos were de rigueur. Having an unusual guitar was part of your statement, part of being out there. Hence the Peavey Razer. 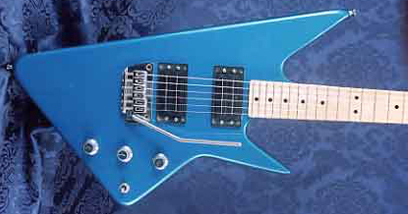 The Razer was actually part of a trio of guitars introduced by Peavey in 1983-84. Hartley Peavey’s company had been primarily an amp manufacturer until the introduction of the T-60 guitar and T-40 bass in 1978, the world’s first guitars made on numerical carving machines. A number of models more or less in that mode followed. Then in ’83 came the Razer and the Mystic. The Razer was shaped, as you can see, like an electric razer! The Mystic was inspired by the creations of B.C. Rich. Either at the same time or in early ’84 these two were joined by the Mantis, which was basically a modification of the Dean ML hybrid of an Explorer and a Vee.

These are really quite nice guitars! They featured Peavey’s patented bilaminated maple neck, with laminates running in opposite directions to increase stability. By this time Peavey was using its Super Ferrite twin blade Humbuckers. These pickups scream! The controls are one volume and two tones, with a coil tap built into the tone controls. Vibratos were just coming on at the time, and this guitar sports Peavey’s Octave Plus unit.

I’m not sure if these guitars made it to 1985 or not. Nor is it known if many were made, but they don’t show up very often, so probably not many exist.

The Razer may have been the weirdest guitar ever built by Peavey, but it probably doesn’t win the all-time weird award. That would be a matter of taste! But it’s certainly comes from one of the weirdest inspirations, a shaver. Well, there was that Gibson Futura of the same period inspired by a can opener. Or was that Pac Man??!