When Darcy Kuronen, the musical instrument curator at the Museum of Fine Arts in Boston, contacted me in early 1999 about their upcoming exhibition of guitars as art, which eventually became the Dangerous Curves exhibition, I was psyched. Guitars as art is my credo, why I collect. Well, at least one of the reasons. After a lot of sifting and winnowing, we agreed on a list that included a bunch of my guitars and a hyper-suspensioned, climate-controlled art moving van showed up to spirit my pretties up to Beantown. My Aria Pro II Urchin Deluxe became the visual emblem of the show, on the catalog cover, billboards, bus signs, banners. Pretty cool! Tucked away at the bottom of the pile was this 1985 Schecter Genesis G6 Illusion guitar!

The exact origin of this Illusion is shrouded a bit in mystery, despite the “transparent” nature of the design! So, everything I say here may be jumbled up and there are probably a lot of missing pieces, no pun intended. (Well, yes it was!) Here’s what seems to be the story.

Schecter. The genesis of Schecter guitars goes back to mid-1970s. In around 1976 or so Dave Schecter started Schecter Guitar Research. Could have been a little earlier. Schecter was into replacement pickups and pickguards, plus some other parts. This was at a time where dissatisfaction with CBS- quality control at Fender was a problem for fans of Stratocasters. A cottage industry sprang up in aftermarket upgrades and do-it-yourself parts. One of those was a shop run by Wayne Charvel, opened in ’74. He graduated to manufacturing in ’76 and shortly thereafter was hooked up with Schecter. Business problems separated Schecter and Charvel, the latter going on to selling out to Grover Jackson and becoming one of the big names of the ’80s. Schecter continued on as a partser until the mid-’80s, when it, too, began marketing guitars, some of them pretty fine.

Ok. Shift to Guild guitars. Begun in the early 1950s by Al Dronge out of the leftovers from the collapse of Epiphone, Guild had a long tradition of solidbody electrics dating to the early ’60s that always managed to remain on the fringes of professional acceptance. Like their dreads, really good but not a Gibson or Martin. By the ’80s Guild electrics had become really, really good, but less and less competitive with brands like Jackson, Charvel or Kramer.

In 1984 a guitar designer named Dave Andrews of David Andrews Guitar Research developed a Jazzmaster-shaped guitar that was basically an X-shaped structure with lots of the wood cut out. This had a glued-in neck. This got a lot of guitar press at the time. He licensed this design to Guild, which introduced the neat X-100 Bladerunner, of which only 95 were ever made through 1985.

In 1985 Schecter introduced its first guitar line with this bolt-neck Genesis model. It was supposedly based on a design by one Bill Reed and Chip Todd. Chip was the designer who worked with Hartley Peavey to develop the Peavey T-60 (T for Todd), the world’s first numerical carving machine guitar. Looks like a rip-off of the Guild to me, and there’s probably a lot more to this story.

Anyhow, this is a cool guitar, lightweight, and hot. While it only has one humbucker, the tone pot is a push-pull coil tap. A real solidbody version was also offered by Schecter. The Schecter Genesises were only offered for about a year. More conventional Schecters followed, as did some more unconventional ones, like the Schecter Yngwie Malmsteen! And whatever you think of the current offerings. 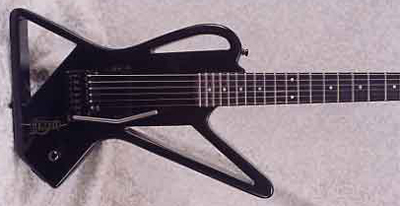 Once this guitar got to Boston, the show designers kind of fell out of love with the Genesis. It didn’t get featured in the main exhibition, but was minimalized, as it were, to a hanging in the cafeteria area. Still, how many guitars get featured anywhere in a world class art museum? Or represent the beginning of a guitar line with a strange pedigree like this one?!

8 thoughts on “How About a Twisted Sister? (1985 Schecter Genesis G6 Illusion Electric Guitar)”