A couple of days ago I was ranting about taking my son on a trip to Europe. Good ‘ol Proud Father stuff. Twice in the same week? Yesterday morning on NBC’s TODAY Show R.E.M. did a live broadcast from the streets of New York City. They played their new hit single, Supernatural Superserious – and ripping into the opening guitar riff was long time R.E.M. sideman Scott McCaughey on his Eastwood Sidejack! Did I feel like a proud father? You bet!

I would have never guessed five years ago when we developed the Sidejack that this day would arrive. I’m quite proud indeed. In fact, rumor has it that you’ll get a chance to see it again tonight on the Colbert Report. R.E.M. with an EASTWOOD Guitar on the Colbert Report? Can’t get much better than that… Very Cool. Here is a picture of Pete Buck with Robyn Hitchcock, earlier this year on the west coast – Peter with his AIRLINE 2P DLX and Robyn with his AIRLINE TWIN TONE. Proud father indeed! 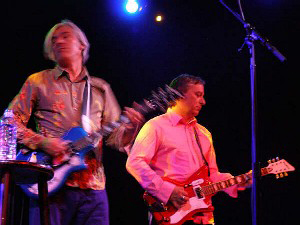