These days Epiphone guitars are almost ubiquitous. If a band plays Gibson-style guitars, they’re most likely to be slinging Epis. I’m not sure why, but I suspect it’s because the quality is pretty good, the sound is decent, the look is there, and, if some scumbag should manage to ease a case out of the back of your van when you’re looking the other way, you’re only out an Epi. In other words, the Gibson stays back at home. This is only the latest twist in a tale full of deliciously ironic symbiosis. Another turn is reflected by this extremely rare 1988 Epiphone Spotlight.

Like on the telephone commercials with the wizard, the goofball crew and the “puppy,” I can hear you gasp, “What the…” Epiphone Spotlight? Never heard of that puppy. Nevertheless, this is a real beast.

I too had my doubts when I first laid eyes on this sweetheart hanging in a pawnshop down on South Street in Philly. Like almost everything I bought back in those days (mid-‘90s), nobody knew what the heck it was. The fit and finish (high gloss polyurethane) were too good, and besides it was a neck-through. That means some serious commitment. I snatched it right up for a couple bills, of course. The quilted top alone was worth that! This was a beaut! 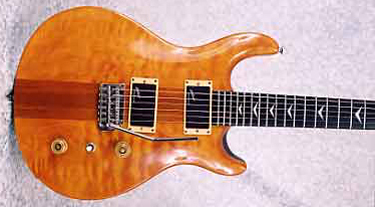 But what was it? That’s when I started pawing through the Epiphone paper I’d managed to acquire. There it was, in a promotional pack from Gibson that my friend Michael Lee Allen had thrown in with one of my catalog orders. The Epi…no wait…the Gibson Nouveau series. Curiouser and curiouser!

Epiphone, of course, had been Gibson’s budget brand ever since they bought their fierce rival in 1957. Epiphone had become an imported line in 1971, thus beginning a long and complicated peregrination as an offshore product.

But Gibson would periodically revive the American manufacture of Epiphone guitars, including some of the last guitars made in Kalamazoo before the final move to Nashville. Which is a fascinating tale, but doesn’t explain the Spotlight mystery.

Turns out that sometime after Norlin’s sale of Gibson to its current owners, someone hatched the plot to produce the Nouveau series. In the late ‘80s Japan was still regarded as a prime source of budget guitars (this was about to end). The Gibson Nouveaus were going to consist of parts made in Japan—neck and body—and assembled and finished in Nashville. This would, of course, technically keep them “American made.” This was not uncommon back then; Kramer seems to have specialized in the practice. The project got as far as introductory literature, as my paper stash demonstrates. As this guitar testifies, the rest of the plan was executed as well, but with another of those twists. Somewhere between the manufacture and finishing, these became the Epiphone Spotlight series. Maybe they got cold feet about the sleight of hand.

In any case, the result was ironically a new—and no doubt rare—“American-made” Epiphone! And a fine one it is. The shape of this guitar is suspiciously like that of the brash young guitarmaker from Maryland named Paul Reed Smith, which were just beginning to make some waves at the time. The Spotlights have neck-through-body construction, with mahogany necks and bodies, capped with a gorgeous carved quilted maple top. As befitting the “budget-deluxe” concept, what looks like a two-octave ebony fingerboard is ebonol, like that used on early Kramers. Reflecting the Epiphone-by-Gibson branding used at the time, a pearl diamond engraved with “Gibson” graced the headstock. Pickups were EMG Selects, serviceable if not exceptional, hooked up one volume and one tone, the latter with a push-pull coil tap pot. This version was outfitted with a traditional style vibrato, but I have another one equipped with a locking Steinberger HB vibrato. There were most likely stoptails, as well, but who knows?

This is a really nice guitar. The heavy poly finish is a bit much, but there’s nothing not to like here.

As evidenced by how familiar we all are with the Epiphone Spotlights, they obviously didn’t last long. However many were made seem to be from 1988. A good guess is that probably one shipment of necks and bodies were produced. 50? 100? The two I have are among the three I’ve seen, all in Philadelphia. I don’t know if any of the Gibson Nouveaus were ever made, although the introductory literature shows photos of them, so at least a couple prototypes were probably put together before the switch to Epi. As common as Epiphones may be these days, the Epi Spotlights both uncommon and uncommonly good!