A few months back I talked about how great the Univox U-45 is. And I figured I’d talk about more vintage Univox’s this month—specifically the 305-B which is a really great amp with 6973 output tubes. And I will (promise) do a column about that model Univox, but I stumbled onto this rare Guyatone this month and wanted to share this rare bird with the My Rare Guitars world. So, while I am stepping away from the Univox models, I’m still stuck in Japan in the 60’s with this Guyatone GA-530A. 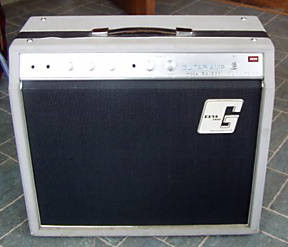 Japanese-made tube amps from the 60’s represent, in general, one of the great values left in the vintage market. Frequently, you can pick up little combos like this Guyatone (or the Univox U-45B) for under $300. Real vintage tube tone for under $300 (and frequently even lower)? What’s not to love?

This Guyatone, along with coming cheaply and sounding great, is a looker. In white Tolex (or Tolex-like material), this is a stunning looking amp that was a popular model (though not for export) in the Mid-60’s Japanese “Group Sounds” movement. A great amp for chiming Beatles-inspired sounds or tremolo-drenched surf-styled instrumentals, the GA-530A is one to keep your eyes peeled for. It’s a classy looking amp, and one that probably looked just fine gracing the stage of the 60’s Japanese TV show Kachinuki Eleki Gassen (“Electric Guitar Tournament”—a highly-rated audience-participation guitar show…something of a Ventures-inspired proto-American Idol for guitar players—guitars were HUGE in the 60’s in Japan). 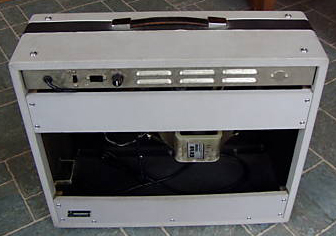 What’s under the hood? It’s a pretty simple and well-made amp. Three 12AU7’s (for preamp, tremolo and phase inverter duties), two EL84’s for output and a solid state rectifier and not much else. The speaker is labeled “Guyatone”, though I’m not sure if it was made by Guyatone or rebranded (there are no codes on it). Whatever its source, this is a sweet-sounding ALNICO speaker in the 20-watt range. 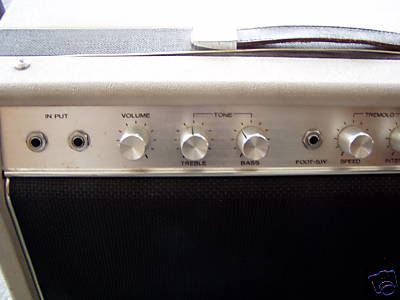 The sound of the amp is very cool and unique. Where most of the Univoxs I’ve heard are little blues and garage-rock machines, this amp is all about chime and cleans. Part of this, of course, comes from the low-gain 12AU7’s. A 12AX7 has, for instance, an amplification factor of 100. The 12AU7’s have an amplification factor of 17. The amp is voiced for cleans and isn’t (as you might guess from the tube line up) the loudest dual EL84 amp you’ll ever hear. Without mods, you can heat things up a bit with a 12AT7 in the preamp, but anything much higher than that makes it start oscillating and wailing a bit. Without some mods, it’s not going to be a high (or even mid) gain amp. 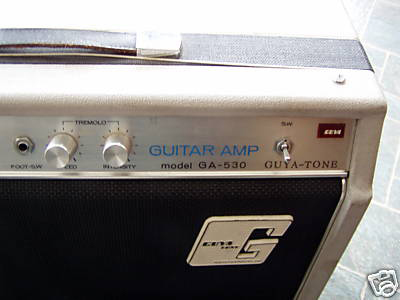 However, played clean (which it stays until about 7 on the volume knob), this thing really shines and sparkles. Byrds and Beatle type tunes sound incredible and it takes to a 12-string really well. Chords are articulate and well-voiced and the amp rings like a bell. Pushed into overdrive (from 7-10 on the volume), and the amp retains its trebly voice, but pushes the EL84’s into a Vox-like chime and grind (albeit at a lower overall volume than, say, an AC15).

And, while this combo may lack reverb for true surf tones, it’s got the awesome gritty sparkle to base your surf tone on, along with an absolutely KILLER tremolo. With tremendous range of depth and speed, it’s a very musical tremolo effect. One of the best I’ve heard in ANY amp. Add a ‘verb pedal, and you’re catching a wave! 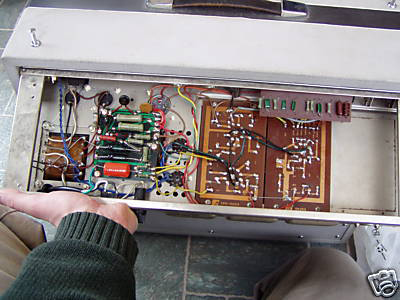 Issues? Well, you are going to have a few when you buy a mid 60’s amp for under two hundred bucks. First of all, unless you know how to do relatively simple work like cap jobs and basic trouble-shooting for bad resistors and so on, the trip to the tech could cost more than the amp is worth. So, it’s probably not a great deal unless you know some basic repair and maintenance.

AND, there is a design flaw on this amp. The tubes are not mounted separately on the chassis, as they should be, but, instead, they’re mounted on the printed circuit board. This is problematic for a few reasons—the main ones being that it’s not nearly as study or durable as the proper mounting on the chassis and that it’s much easier for microphonic issues to arise (whether from the tube or the circuit board and then amplified through the tube). 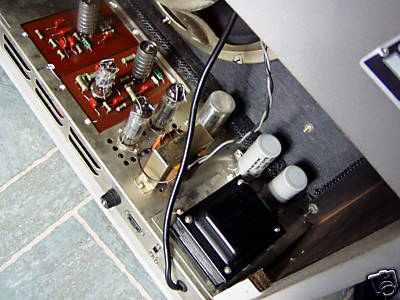 Also, it’s not nearly as easy to modify a printed circuit board amp as it is on a hand-stuffed circuit board or a point-to-point amp. And you might want to modify this model for a little more gain on the preamp, via a nice 12AX7, pushing the rest of the signal down the chain. Or add a bypass cap to fatten up the sound. Both of these are still easy mods—just not quite as easy as if it were a point-to-point amp with a lot of space to be noodling around in the chassis.

Still, you want perfect for under two hundred clams? These are great-sounding, great looking little tone machines. And while the build quality may not equal Fender or Marshall (or even Univox), they are still pretty easy to fix and modify, and you can’t beat a little 12” combo with two EL84’s jangling and grinding for this kind of price. The Guyatone GA-530A is worth checking out—if you can find one!