It’s once again time to take stock of what’s happening in the world of tube guitar amps. I’ll examine some interesting happenings in 2009, make some predictions and revisit Tube Tone Crystal Ball 2009 to see if any of last year’s guesses came true!

Small Is Beautiful: Under 10 Watt Guitar Amps Grow Up
Last year I discussed what I believed to be the growing fascination with power reduction. At that time I reviewed the ways in which an amp’s power can be reduced: attenuators, variable power reduction, switchable power reduction, pentode/triode operation and single tube, low watt amps.

One year later it turns out that the industry seems to have focused on single tube amps and either variable or switchable power reduction.

In 2009 the already crowded ranks of the ‘under-10-watt’ category grew significantly. Three aspects of that growth are, I believe, interesting and give us an indication of what’s coming.

Where are we headed?
I believe that the low power amp trend will have legs at least as long as the ’18 watt’ trend – that is 5+ years. For the next few years expect to see more under-10-watters hit the market. This trend will be long lived for two reasons:

The positive result for all electric guitarists is that as more and more builders pursue low power amps of their own, the quality and variety of under-10-watt amps will increase – just like 15-18 watters did a few years ago, which were considered low power amps before the under-10-watt trend took hold!

Guitar Amp Industry Reacts to Change – Extension, Contraction and Caution
It’s no surprise that this year the Crystal Ball is clouded by the effects of the economy. Most industries (all?) have been forced to change tactics. Here’s how I think the guitar amp industry will cope.

Up until the fall of 2008 the overall guitar market was as overheated as the rest of economy. Vintage guitar prices were sky high, manufacturers were introducing new products at a rapid rate, a boutique builder baby boom was in full swing with new arrivals being born almost every week. Music Industry revenue statistics confirmed double digit annual growth: guitarists were buying gear like there was no tomorrow.

Sound familiar? Substitute guitars and amps with almost any product you can think of and the scenario was the same.

And then we hit the wall.

How have manufacturers reacted and how will they struggle through until sales start to grow?

This is confirmed by an interesting fact about how this recession differs from those of the past: the sale of ‘luxury’ products have dropped right along with everything else. In every recession since the Depression, luxury goods manufacturers (in our case think boutique builders) enjoyed relatively robust sales: those with money kept buying high-end items. Not this time.

So, I believe that in addition to under-10-watt amps many amp builders will extend their product lines by creating their own line of effects pedals. After all, compared to a guitar amplifier an effects pedal requires less labor, fewer components (usually), no power supply (or an off the shelf, cheap wall wart), a dramatically smaller and less costly cabinet and, as is the case with combo amps, they don’t require a large and expensive speaker.

To an amp company, that looks like a promising path to a relatively inexpensive product line add-on. I’m certain that I am not the only amp builder who has thought of that!

However, will extending a previously amp-only product line by adding pedals be the ‘answer’ to increased sales? Maybe.

We all know the pedal market is as crowded as the amp market if not more so. Will amp company offerings cause guitarists to buy a pedal when they otherwise wouldn’t or cause them to choose the amp company’s product vs. a pedal company’s?

Time will tell, but those amp companies that successfully launch a line of pedals will do so solely on the merit of their product (and their marketing budget!): amp builder pedals will have to be sufficiently different from the crowd to garner attention and sales.

Can that happen? Who knows for sure, but I believe you will see an increasing number of pedals offered by amp companies that are, of course, designed using their knowledge of tube amp design and tone – not from a pedal manufacturer’s ‘pedal-centric’ perspective.

So, expect to see pedals that are designed to form a ‘system’ with an amp rather than being simply an add on. How a pedal compliments, enhances and changes the amp’s tone (and vice versa) and how the pedal interacts with the amp’s first preamp stage will, I think, be areas of interest for amp-centric pedal designers.

Pedals designed to, in effect (bad pun), add another channel or multiple channels to an amp… pedals designed with a frequency response perfectly matched to an amp’s voicing… overdrive and distortion based on the detailed knowledge of how tubes produce their particular mojo and long experience ‘voicing’ amps. I think that amp builder’s will have their own take on pedal design, particularly in conjunction with their own amps.

Guitar Amp Product Line Contraction – Less Choice
I think we will see some amp companies narrowing their product lines. Following the unfortunate theme of this article, higher priced and/or lower volume models may see the end of their life cycle in the coming 12 months.

Too bad for guitarists, but inevitable at least to some extent I think.

Guitar Amp Product Line Caution – Fewer New Products
This is another prediction that isn’t a surprise. When sales are down there is less money available for research, product development and product launches. Plus, these days the risk inherent in any product launch is much greater than in the past.

So, as was evident in 2009 – aside from low power amps – I believe that the number of new amp product introductions will significantly lag that of past years.

Again, too bad for guitarists, but inevitable.

2009 Tube Tone Crystal Ball Revisited.
Last year I made three predictions. As it turns out, it looks like I called two of them correctly!

I’d like to know what you think is happening in the world of tube amps. Send me an email at: Don@MackAmps.com. 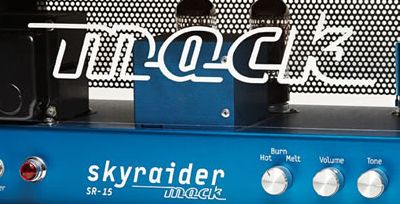