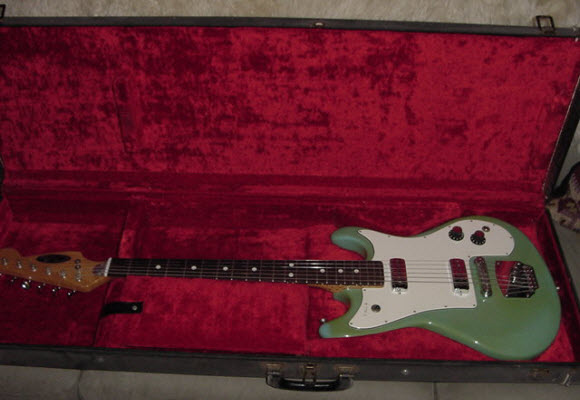 Castelfidardo is a town in the province of Ancona, in the Marche region of central-eastern Italy. During the early 1960’s this area was a hot bed for small but talented guitar builders, but also had links back to USA. From this area in Italy builders like Zerosette were branded with names like JG, Goya, Contessa, Atlas and Sano. Sano? Weren’t they an AMP builder in USA? That’s the connection! In the 1940’s a music school called Major Music – founded by Joe Zonfrilla, Sr – was teaching us all how to play accordion. In the mid 50’s, accordion player Nicholas Sano wanted a pickup for his accordion and Joe came to the rescue with a patented pickup design which led to the design of the Sano amplifiers. Shortly after that the Sano company began to import guitars from Italy (Zerosette) under the brand name of Contessa.

Here are two fine examples, a 6-string guitar and a bass. Both simple designs with two pickups, 3-way switch volume and tone. The remarkable “hidden gem” of these guitars were the necks. They are as close to early Fender profile and radius as I have found. In fact, many of the guitars from this area of Italy have the most underrated necks. The weakness was always in the electronics – typically rather thin and weak tone, and they are quite rare in North America, so the brands never really caught any traction in the collector world.