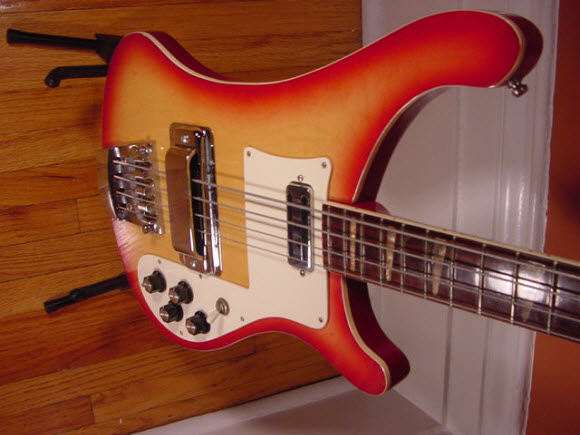 Growing up outside Toronto in the early 1970’s, El Degas was a very popular brand in most guitar shops. Made in Japan, the quality was great, the price was right, but that is about all we know about them. The internet is surprisingly thin on threads to the origins of El Degas. I’ll take some educated guesses from owning a few. I’d guess they were made at the same factory that was putting our UNIVOX guitars from Japan at the same time. I’d guess there was an importer in USA somewhere that sold to a smaller distributor in Canada. Most El Degas models were tight replicas of Les Paul’s and Strats, and all the ones I have owned over the years were exceptionally good quality. I’ve even seen a Les Paul Recording model with the El Degas brand! So it was not a one trick, one year pony. This Rickenbacker Bass replica is very good, and likely sold for 1/4 the price of the original at the time. I took this in on trade some time back, and remembered my younger brother in the mid 1970’s playing one of these in his band “Drama”. How dramatic. Good player – at the time he could peel off Chris Squire riffs blindfolded – later Barry Adamson riffs from each Magazine LP, but then switched to guitar to form Surf Cinema. Last year he was up here in Toronto from California for a visit. I showed him this El Degas bass. As you might guess, it went home with him where it belonged.

But as for the history of the brand, who knows? When it comes to El Degas, we’re all pretty much guessing. Would the real original importer please stand up? Or maybe his nephew? Somebody out there must know something about this brand…