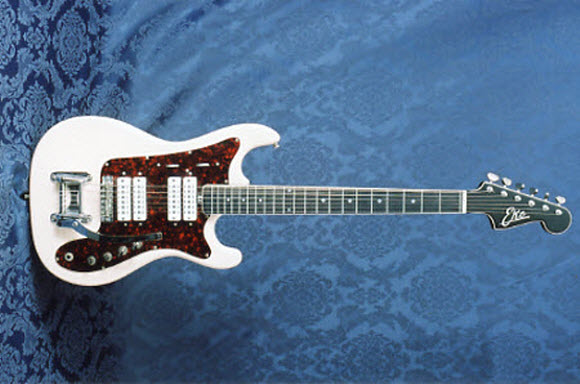 Even though I don’t frequent them often, I love classic car shows. The sight of those two-tone jobs—often done up in exotic colors like pastels or turquoise—always raises a smile of nostalgia, a glimmer of my youth when they were new and I had dreams of being able to hit the road. Kind of like how I feel when I look at this very nifty EKO Condor. 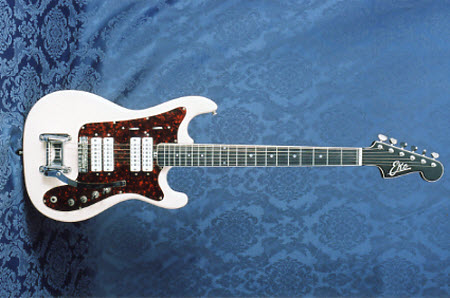 The first time I laid eyes on this guitar was in the showroom of LoDuca Brothers warehouse in Milwaukee, which was another of those “Temples of Doom” you hear me talk about periodically. LoDuca Brothers were (or was if you consider it a company, not siblings) the American importers and distributors of EKO guitars (actually Rickenbacker handled the West Coast). LoDuca Brothers had its roots in a late 1930s, early ‘40s accordion duo Vaudeville act featuring Thomas and Gaetano (Guy) LoDuca. According to their son, Mickey, as good Italian sons, the brothers handed their earnings over to their father, who paid them an allowance and put some in savings. When they’d amassed a couple grand, they opened the first of what would become a chain of music studios around Milwaukee. As they thrived, they began to import and sell LoDuca brand accordions sourced from Oliviero Pigini of Recanati, Italy, just north of Castelfidardo, a town that is still the hub of accordion manufacturing in Italy.

As we’ve talked about before, accordions were a big fad among young Baby Boomers in the early to mid-1950s. This was good for the LoDucas business. But when the wind was squeezed out of the demand for accordions, it kind of left the LoDucas with empty hands. They played around with importing keyboards—including the actual black and white key assemblies—until, fortuitously, folk music happened and demand for guitars began to pick up toward the end of the 1950s. 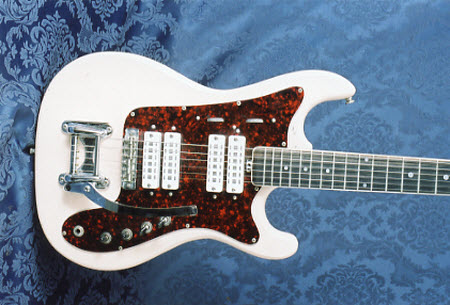 Pigini knew only too well about the drop in sales of accordions in the US, of course. So the company decided to expand into guitar manufacturing. LoDuca Brothers had an accordion distribution network with around 600 outlets and was doing business with Pigini, so they were a natural partner to handle the expansion into guitars.

As far as I know, EKO was the brand name chosen for Pigini’s guitars and didn’t come off another existing line of instruments. I don’t think it was ever used on accordions (though it eventually did get put on some electronic keyboards and drums). Just as with accordions, Pigini would gladly put the brand name of your choice on a batch of guitars, but EKO was their main string moniker. EKO guitars debuted in 1961.

The first EKO guitars were acoustics and among the first customers was Sears. LoDuca had imported a little chord organ for Sears beginning in 1959, so they had an established relationship. The first EKO electric guitars were a pair of plastic-covered solidbodies, the Models 500 and 700, covered in sparkle plastic, plus a range of archtops, introduced in 1962.

From the get-go Pigini relied on input from LoDuca Brothers to develop guitars that would sell in the American market. In this regard LoDuca enlisted a number of professional guitarists from the Milwaukee area, who endorsed EKOs. 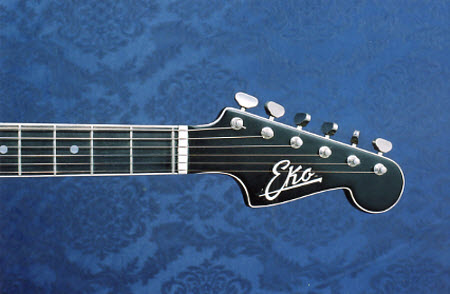 LoDuca and EKO hit the market at a good time. EKO’s biggest year was probably 1967, when this Condor was made. It’s the huge ’67 catalog that most frequently circulates in the paper trade. I fell in love with this the moment I laid eyes on it. I mean, it’s so T-Bird (as in Ford with a porthole) or Edsel (yeah, I loved those, too). That pale pink with the black neck. And four—count ‘em—four pickups. It pretty much screams out for a matching tuxedo. Besides being a looker, this guitar actually plays pretty well, too. It’s light-weight and comfortable. The single-coil pickups aren’t screamers, but they’re beefy enough. You get a nice variety of tones, though not those swell glassy out-of-phase sounds like on a jimmied Strat. Having four on-off switches is darned awkward, but otherwise this is a sweetheart.

So, why was the warehouse this came out of another Temple of Doom? Mainly because of a confluence of events. Demand for guitars in the US began to drop in 1968. Tastes changed. Hendrix, Clapton and Bloomfield were whetting appetites for axes capable of chopping, not matching tuxedos. Then, at some time probably around 1968 or ’69, Oliviero Pigini, who loved fast sports cars, died in a car crash. Anecdotal evidence suggests that EKO’s seasoned wood supply burned up in 1970, but I can’t confirm that. In any case, quality supposedly declined.

In any case, business waned and LoDuca Brothers found itself sitting on a warehouse full of unsold EKO guitars. And there they sat for years. Fast forward and in the 1980s vintage guitar collecting became all the rage. Collectors and dealers got the word and began to mine the trove at bargain prices. Temple of Doom indeed! When I strode in, the pickings were comparatively slim, but there was still plenty of guitar eye candy left, including this two-tone beauty, as fine a sight as any gleaming T-Bird, or maybe a pink Cadillac!