Twenty Eight years ago in Toronto, CANADA, an 18 yr old music fan slipped backstage, unnoticed by the distracted security people. Up a staircase, down a hall, then back down another staircase. He heard voices coming from the bands dressing room. He quietly stepped inside and said, “Mr. Nelson, will you please autograph my Album?” The memory seems like it was just yesterday. There, standing in front of me was my guitar hero, Bill Nelson of Be Bop Deluxe. He smiled and obliged. I turned to pose with Bill for a picture as my friend prepared to snap it. “What? No film?” My good friend Wally Moss had forgotten to load film in the camera. Go figure. People follow their passions – Wally’s was photography, mine was the electric guitar – and the musicians who made them sing. Bill Nelson remains one of the best. 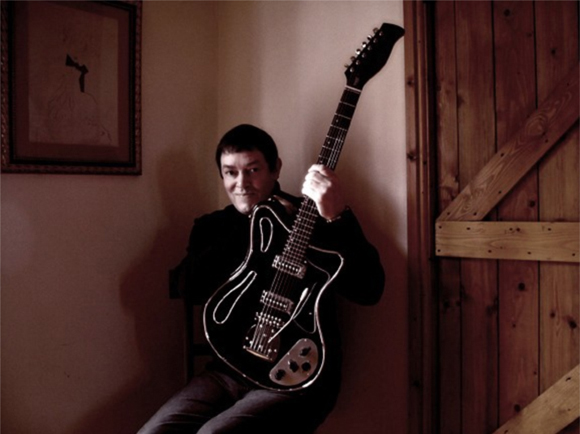 Here we are 30 years later and after following my passion, I find myself as the president of EASTWOOD Guitars. My enthusiasm for music has not diminished one bit. I still seem to spend more money on CD’s than groceries. I have thousands of LP’s that have not seen a needle in years, due to the fact that I now have thousands of CD’s that for a large part, replicate my LP’s. Of course now that I have my 60G IPOD, the CD’s are getting a rest. Crazy? Perhaps, but I would not give them up for the world. Being surrounded by music and electric guitars, I find myself enjoying life more now than ever. How could it get any better? How about reconnecting with Bill Nelson!

As luck would have it, our paths recently crossed again – this time not through my pursuing an autograph – but through Bill’s on-going interest in Bizarre Guitars. I have followed the career of Bill Nelson since his first release in 1971, Northern Dream (which by the way was the album I had him sign). Most of us were introduced to Bill through the critically acclaimed 70’s band, Be Bop Deluxe. I still play air guitar when listening to riffs from LIVE IN THE AIR AGE, possibly one of the greatest LIVE band recordings from that era.

Bill continued through the next 3 decades with a solo career that amassed a staggering number of releases. I cannot remember a year going by without the purchase of at least one Bill Nelson CD, often two and three. Some of my personal favorites include QUIT DREAMING AND GET ON THE BEAM (1981), CHIMERA (1983), MAP OF DREAMS (1987), AFTER THE SATELLITE SINGS (1996), MAGNIFICNET DREAM PEOPLE (1997) and DEEP DREAM DECODER (1998).

If for some reason you missed the last three decades and are in need of a quick fix, run out and get WHAT NOW, WHAT NEXT?, it is an exceptionally good compilation of the Cocteau Years from 1980-1990. Also pick up SATELLITE SONGS, the perfect companion. More than enough to rekindle the spirit.

I am the proud owner of over 40 CD’s (and a few dozen vinyl LP’s) from Bill Nelson. Thirty years later, now that our paths have crossed again, Bill is the proud owner of an EASTWOOD Saturn ’63. How cool is that!? Imagine the smile on my face when Bill wrote back with the following message:

I’m one of those post-war baby-boomers who were born into the era of rock n’ roll and science-fiction. Like many well-known British musicians of my generation, I attended Art School in the ’60’s and have always had an eye for unusual visual design, whether that be in the realm of cars, clothes or architecture… guitars too. Especially guitars!

I remember standing outside local music store windows as a 12 year old, blown away by the exotic, futuristic designs of many ’50’s and ’60’s guitar manufacturers such as Fenton Weill, Wandre, Hopf, Guyatone and Teisco. These were not the big name, glamorous makes that famous stars played, but they were, for me and my budding young musician friends, even more other-worldly, more electric than the expensive mainstream brands. Their visual appeal went way beyond practical considerations and strayed into the realm of pure fantasy. They were aesthetically ‘out there’, super-modern, ultra-baroque. They embodied the essential, electrical essence of rock n’ roll.

Unfortunately, they were not the most player-friendly instruments in the world, often being manufactured cheaply, despite the avant-garde nature of their visual appeal. Nevertheless, 40 odd years later, these vintage designs have become rare and coveted instruments, (‘though sadly more suited towards the wealthy collector’s cabinet than the recording studio or stage.)

Hats off to Eastwood Guitars for their visionary mission to re-issue some of these rare designs yet keep the guitarists of the 21st Century in mind. Eastwood guitars look just like the original instruments, but with the added bonus of superior build quality, modern playability and a vibey, characterful tonality. These guitars go beyond retro-futurist nostalgia to expand any contemporary guitarist’s tonal palette. And separate you from the herd.

Magically, my Saturn 63 reminds me of just how I felt standing outside that music shop back in the late ’50’s, and confirms just why I fell in love with electric guitars in the first place, all those years ago.

Somehow makes it all worthwhile, don’t it? Well, if you are a regular reader of this newsletter, you know what I’ve been up to lately, but what about Bill Nelson? Quite a lot actually.

In the past 30 years, Bill has released close to 50 CD’s, many of which are double, triple and even quad disk sets. You wonder when he finds time to sleep! He has also worked on film, television and video scores, directed a variety of videos, toured as part of Heroes De Lumiere with his brother Ian, worked with Roger Eno, Gary Numan, Yellow Magic Orchestra, Harold Budd, Flock of Seagulls, John Cooper-Clarke, David Sylvian, Laraaji and Kate St. John under the Channel Light Vessel name and performed as part of the Japanese group Culturemix. Phenomenally busy, driven by his muse and an active imagination, Nelson continues to delight and confound.

No signs of slowing, either. Bill tells me he has got two new albums in the pipeline: ‘Neptunes Galaxy’ and ‘Return To Jazz Of Lights’ as well as some rare, previously unreleased Be Bop Deluxe material, all coming out later this year. You can get in line (behind me) to sign up for these releases on his website, Dreamsville (www.billnelson.com). There are plenty of things to do during your visit to Dreamsville – pack a lunch and have fun!

Here is a short list of recent releases from Bill Nelson (all available at DREAMSVILLE):

8 thoughts on “I’m an Axe Victim: Reconnecting with Bill Nelson of Be Bop Deluxe”