Spaghetti Westerns. Justice by Clint. The Duke as Hondo. Cattle drives, horses, chaps, revolvers, rustlers, Rangers and the Red River Valley. It’s the image of Texas that runs through our blood like a celluloid river. But even though this Hondo II Longhorn hails from Texas, like Eastwood’s films directed by Italians and filmed in Spain, there’s a lot more behind the story! Here’s the beef.

Calling this guitar a Longhorn is obvious because the cutaway horns are, well, long. Duh. But in fact, associating the Longhorn guitar with cattle (though perhaps not cowboys) has a basis in ancient history. Technically speaking, this two-horned body is the shape of a lyre. Lyres were in use in Mesopotamia—a region we know today as Iraq—at least by 2500 BC and probably earlier. Since some of the harps (a related instrument) that have survived from that time were outfitted with elaborately decorated bull’s heads, it is entirely possible that the lyre’s shape was also meant to bring steer horns to mind!

The lyre continued to be popular at least through the flowering of ancient Greek and Roman civilizations and may have survived in one form or another into the early Middle Ages. The shape was actually rediscovered in the late 18th and early 19th as Europeans became interested in unearthing ancient cultures. By the mid-1800s guitars with lyre arms began to appear. Indeed, they may have been responsible for the invention of harp guitars, but that’s just a guess. Lyre guitars continued to show up in the hands of cute babes on postcards up until World War I after which they slipped from memory, until Nate Daniel brought them back in the late 1960s. 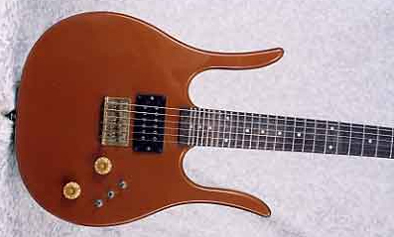 Most of us probably know this longhorned guitar shape from the legendary Danelectro Guitarlin. Indeed, this Hondo guitar was intended to be a tribute to that ‘60s beauty. Danelectro bit the dust in 1969, yielding to the beginnings of international guitarmaking. Ironically, it was in that same year that the Hondo brand was born, soon to become the first significant guitars coming from Korea. Hondo was owned by International Music Corporation (IMC) of Fort Worth, Texas, which was run by Tommy Moore and Jerry Freed. In 1969 IMC had a relationship with Tokai in Japan and in ’69 traveled to Korea and entered into an agreement with a relatively new company called Samick. IMC upgraded the Samick operation with technology from Tokai and began to import Hondos.

To be honest, the Korean Hondos weren’t all that great, but Hondo kept working with Tokai, and some of its deluxe models continued to be made in Japan. Which brings us to this Hondo II Longhorn, which was introduced in 1978. This is actually a swell guitar with a mahogany body and 31-fret fingerboard. It was probably made by Tokai. The active 12-hex-pole pickups were powered by an onboard preamp that let you kick this puppy into overdrive at the flick of a switch. Giddyup!

It’s not clear how long this model was offered by Hondo, but probably only a year or so. By the time this beast was history, so pretty much was the classic celluloid image of Texas, replaced by the post-modern cynicism actually introduced by those Spaghetti productions. Indeed, the Hondo II Longhorn itself was the beginning of a post-modern heritage of tributes that includes the early ‘90s hybrids assembled by Tony Mark and the excellent reproductions still made by Nashville’s Jerry Jones. Nevertheless, when you pick up one of these kick-ass, steer-inspired Hondo Longhorns and throw that pre-amp switch, you’re deep in the heart of Texas!