Rhetorical question: What do getting fit through exercise and liking solidbody electric
guitars have in common? And, no, I don’t mean Sweatin’ to the Oldies with Richard
Simmons or any workout program designed to dance your way to 6-pack abs. I mean 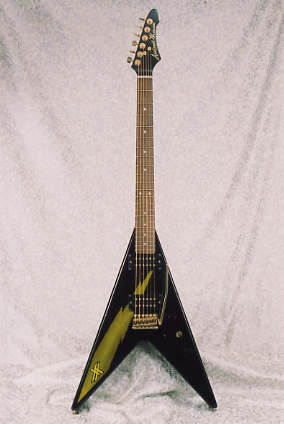 discovering Heavy Metal and the guitars that were made for it, like this Aria Pro II XX
Deluxe!

Forgive me if I’ve told this autobiographical story before (age isn’t kind to short-term memory), but it’s pertinent to this guitar. I didn’t really become interested in electric guitars until the mid-1980s, even though I’d been playing for 30 years by then.
My first electric was a used Gibson ES-225T in the late 1950s that I used to learn Chet
Atkins licks. I switched over to acoustics when folk music was big, playing electrics
again in the late ‘60s in a blues/r’n’b band. Our best number was a spirited version of
the Box Top’s “The Letter.” Still like that song. Then I became a classical guitarist.
And a writer. These are not, fyi, aerobic activities. And I don’t descend from a line of
skinny people.

By the early 1980s I felt I needed some physical activity. I went to Sears and
bought a primitive exercycle. I got a good set of Koss headphones to hook up to my
KLH. But I needed some juice. Despite playing Bach, Sor and Giuliani for nearly a
decade, I’d kept up with my Guitar Player magazine subscription. In its pages I’d been
reading about Ozzie Osbourne (whoever the hell he was) and his rave new guitarist
Randy Rhoads. So I went out and bought a copy of his record (when a record was a
record, an actual vinyl artifact with 12” cover artwork), Blizzard of Oz.

Indelibly imprinted on my brain is that first bike ride. I set the needle at the very
outside of the lead-in groove and hopped on the bike.
DuddleyDuddelyDAHdadaDuddleyDuddelyDAHdada. To quote a current Hyundai
commercial, “Holy [bleep].” As a guitarist, I hate song lyrics on principle, but when the
singer croons “What’s the future of mankind, don’t ask me ‘cause I got left behind; Don’t
ask me, I don’t know,” well, I’m hooked. Better than “The Letter.” Randy Rhoads? I’d
never heard guitar playing like that. Bach for rock n’ roll.

What followed was a descent into Heavy Metal. I’d missed all popular music
after 1972 or ‘73. Three Dog Night and Jethro Tull were the last things I’d listened to
before switching to Julian Bream and John Williams. By total coincidence I found
myself at the beginning of the New Wave of British Heavy Metal, affectionately dubbed
by critics at the time NWOBHM. Hmm…

I bought magazines. I devoured records. I began to notice the guitars. The
tastes of the NWOBHM and the nascent American correlatives, which would eventually
become known as neo-classical metal, liked Flying Vees and Explorers and other
non-Spanish-shaped guitars, often with custom graphic finishes.

It would be a few years before I started collecting electric guitars, by which time
the guitars of the NWOBHM were becoming passé. But my interest had been piqued
and I began picking up some of the more noble examples. Like this 1983 Aria Pro II XX
Deluxe, part of their XX Series.

Basically, it’s a mini-Vee with graphics. I’m not sure
what the body is, but it’s lightweight, maybe poplar or alder. I don’t know who made it.
Aria was/is a trading company. Trading companies did the marketing and distribution,
working with a family of factories to provide whatever product they needed. Many of
Aria’s better models were produced by the legendary Matsumoku in Japan, but these
XXs do not have that vibe. Instead, these remind me more of the Ibanez Axstars of
1986 which were made not at FujiGen but at Chushin, also in Japan. To quote Randy
Newman’s theme for Monk, I could be wrong now, but I don’t think so.

If you’re going to hop around on-stage in Spandex—which I, needing an
exercycle, sure as hell would never do—you could do a lot worse than this Aria. The
neck is lacquered black, which increases speed. The two Protomatic V humbuckers
(probably Gotohs) are decently hot. In 1983, when this was made, locking vibratos had
yet to conquer the world, so we still have a traditional style. This particular guitar was
found as new old stock, never having been previously sold or played. Pretty neat.

A lot of water has passed under the bridge since these heavy metal guitars were
popular. Not least of which is being able to buy inexpensive Japanese guitars for sale
in the U.S. Nevermind whatever is the latest iteration of Heavy Metal, which is eons
away from NWOBHM. And my exercycle rides hooked up to my KLH. (Not to mention
even KLH.) For the record (history, not vinyl), I try to walk 3 miles every day, plugged
into an iPod with SkullCandy earbuds listening to…sorry, the latest Solomon Silber or
Ana Vidovic classical guitar CD. But, I confess, every once in a while on my walks I dial
down to Ozzie and Randy wailing on “Don’t ask me, I don’t know (know, know, know).”