In the good old days, guitar cognoscenti used to snicker at ‘60s Japanese guitar styles because they looked as if they just co 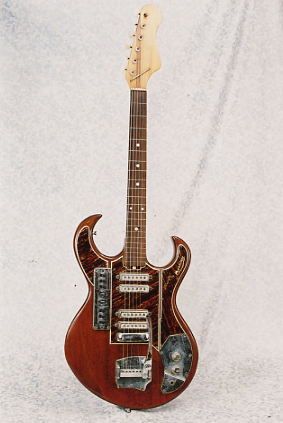 uldn’t get it right.  As in make a guitar as clean and cool as a Fender Strat or Jazzmaster.  The joke was on the experts.  If the Japanese guitar designers did anything, they got the essence of ‘60s style just right!  Like with this classic 1960s Montclair.

I never really thought much about Japanese guitars back in the day.  By the time they started showing up, I fancied myself a “folksinger” and was plunking on Harmony and Guild acoustics.  I didn’t pick up an electric again until late in the decade and Japanese guitars still weren’t on the menu.  But I kind of shared the standard opinion.

The truth is, of course, that Japanese guitar designers probably could have made copies of Fender Jazzmasters—and, indeed, except for a smaller size and certain details, they did with some early guitars—but they weren’t really trying to.  The Japanese weren’t really thinking about “copies” yet, like they would a decade later.  But they did have their eyes on guitars being made in England by Jim Burns!  As is obvious the moment you ogle those big pointy horns and the nifty multi-part pickguard on this Montclair.

Later, when I became interested in these strange beasts, my opinion began to change quickly.  While these guitars looked a little goofy at times, I began to learn that they weren’t so poorly made, after all.   As Jack Westheimer use to tell his associates about their role, they were there to sell guitars, not set them up.  Make sure the neck angle’s right, set the saddle intonation, adjust the action, optimize pickup height, and these guitars often turn into mean playing machines.  And they don’t sound like a Strat.  That’s the whole point! 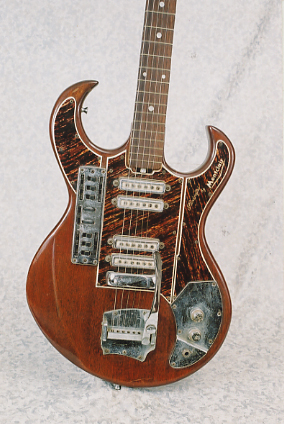 en other Montclairs and really didn’t have a clue about them.  Who made them?  And for whom?  That is, until I started to look into it recently.  I still don’t know who imported/sold Montclairs.   They’re actually fairly plentiful, relatively speaking, so it must have been someone kind of significant.  But now we know a bit more about who actually built this guitar.

This Montclair is basically identical to an Ibanez Model 3904.  Montclair was just one of the labels produced by Hoshino at its Tama factory beginning in 1962.  In addition to Ibanez, other brands made by Tama included Continental, Goldentone, Tulio, Jason, and others.

According to internet sources—notoriously unreliable—Hoshino/Tama began producing guitars inspired by Burns London—especially the Burns Bison—almost from the beginning.  For sure by 1963, they produced the Models 994, 1802, 1803, 3902, and 3903, the final digit signifying the number of pickup units.  These same sources suggest that these Burns-style guitars were produced at least into 1966.  The Tama factory was closed down in 1967, so that would be the outside limit in any case.  There’s really no way to tell when this guitar was made.  I’ve assigned 1964 to it because I’m pretty certain the 3904 was in production by then.

The Burns Bison was famous for introducing the “Wild Dog” effect. I actually bought a Burns just to experience that sound.  Which was a bit underwhelming.  Actually, it was just two pickups out of phase.  I guess “wild” was a little milder in the early 1960s than today!  Oh well.  The Tama-made Montclair didn’t feature the Wild Dog effect.  But it was relatively sophisticated.  Four sliders activated each pickup, though, as was often the case in the ‘60s, the differences were more subtle than distinctive.  The two other switches let each pair of pickups alternate between solo and rhythm modes, basically toning things down with a capacitor for chording behind your lead singer.  The rollers are tone controls, the knobs volumes.  The 2-piece maple neck is reinforced with a generous piece of mahogany, an idea borrowed from classical guitars.  Plus there’s an adequate truss rod.  The body’s a big chunk of premium mahogany.

In retrospect these Montclairs were pretty decent guitars, available amazingly early, given the old prejudice against Japanese guitars.  No, it’s not a Strat or a Jazzmaster.  But if you have a yen to light up a rave on Apache or Little Deuce Coup, you could do a heckuva lot worse than plugging in a well set-up Montclair Burns Bison copy.  And you’d sure look clean and cool, Fender guitars notwithstanding.