I’d like to write about this myself, but this article that came in my email earlier this week pretty much sums it up:

There’s been buzz on the Web and an actual broo-ha-ha this week in anticipation of the announcement of Gibson’s “Jimi Hendrix Guitar” package. As even the most casual Hendrix fans know, his main axe was a Fender Stratocaster. Especially devoted followers are likely aware that Jimi occasionally played a Gibson Flying V. Gibson’s Custom Shop already offered a high-end tribute model Flying V of just 300 copies with a list of $12,300 in 2007, so this new model would surely be some variation on that, right? 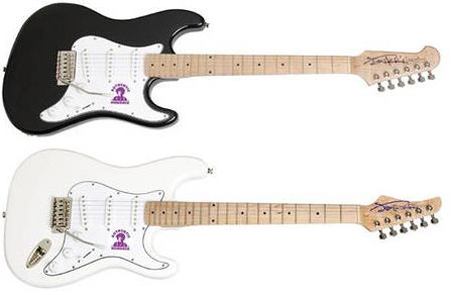 What was instead unveiled is something that is baffling many: it’s a Strat copy.

Gibson is clearly excited about the project. At Gibson.com a Hendrix image is on the main page, top of the fold, and when one clicks through it, a long tribute to Hendrix with pictures of the iconic guitarist are posted, including one with his Fender Strat.

According to the press release, this new product will be an entry-level guitar package that includes the guitar, a Hendrix signature Voodoo Child amplifier, and a Foxey Fuzz pedal. Hendrix’s face is on the pick guard. The pack also includes an instructional DVD and a USB drive containing exclusive Hendrix media content and a “Hendrix inspired tie-dyed tee-shirt and bandana.” It is reported to retail at $199.

When asked for a comment, Fender’s media department replied: “I understand you’re interested in a comment regarding the recent product announcement from Gibson. As it is not an FMIC product, it would be inappropriate for us to comment on it.” 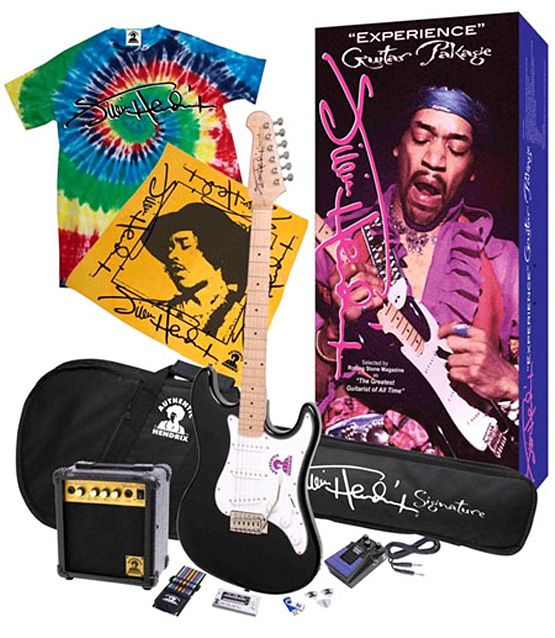 Gibson’s media department did not respond to several requests for a comment of any kind, including how they thought the product would do, or whether or not they are concerned with possible patent infringement. President/CEO Henry Juszkiewicz’s office was contacted directly but calls and e-mails were not returned at press time

Reaction
Out in the blogosphere, virtual tongues were wagging. Musicradar.com, one of the first to break the news, commented on the irony: “Gibson sued Paul Reed Smith in the early 1990s over the latter’s Singlecut design, claiming it breached design copyright. In that drawn-out case, Gibson finally conceded in 2006 that only ‘an idiot’ could confuse PRS Singlecut with a Gibson.”

Guitarist.co.uk featured an interview with Hendrix’s daughter, Janie, his sister and head of Authentic Hendrix, the estate. In it she points out that it’s not “Gibson branded” but “Jimi Hendrix branded.” Also she says: “It was Gibson who saw a vision from the beginning and was willing to work with us. We don’t have anything against Fender, we have no bad blood, but it’s just that we built a better relationship with Gibson over the years.” She stressed that with Gibson they hope to bring music making to a new generation, something her brother would certainly approve of.

When asked if this might be seen as exploiting her brother’s name, she states: “Jimi was our family member and we’ll just make sure that we take care of him the best way we can. We are committed to keeping Jimi’s legacy alive and intact and bring it to you in the most authentic form.”

In reporting this, the U.K. music trade magazine, MI Pro, writes: “The bewildering move by Gibson to create, essentially, a copy of a guitar it has been in direct competition with for over 50 years seems at best ill-advised, at worst arrogant bravado, particularly when considering Gibson’s continual recourse to the law courts, suing those that encroach upon what it sees as trademark design.”

Some retailers, upon hearing the news, were surprised. “Is this for real?” responded Bob Moggio of Mojo’s Music, Edwardsville, Ill.

“I guess April Fool’s Day is early this year,” sighed Gary Gand, of Gand Music and Sound, Chicago. “One more low-cost toy to try to tap into the babies of the baby boomer market. Dad will buy it for himself but give it to the kids…what was that old saw about one born every minute?”

“If it does as well as the Wayne’s World Strat, none of us are gonna get rich,” Gand cracked.

“As an independent retailer nothing seems to amaze me more than stunts like this,” says Gordy Wilcher of Owensboro Music, Owensboro, Ky. “The lines from the major guitar players are more blurred than ever. There is no loyalty. Even more surprising, these manufacturers have completely lost site of working to maintain the integrity and value of their products. This newest “Jimipaulcaster” is just the latest in any attempt to ‘move’ some wood. Guess what? Most new consumers don’t have the emotional investment and love for the logo. Our customers want something unique and of value. Sorry guys, I just ain’t buying it!”