Well folks we all know what great guitars have been designed and created over the years, but there were some vessels of musical expression in the guitar world that were, lets say a stroke of mistaken genius. In this column I’ll discuss some of the mistakes that we have more or less taken for granted, and I also give some of my own mistakes that might work out for you.

The great Leo Fender and his mistakes of genius.
When you are a musical visionary like Leo Fender even your mistakes are great creations. Lets start with the most influential and copied amplifier of all time, the 1959 Fender Bassman. The Bassman was a 40 watt bass amp, not a bad idea at the time, knowing that there were no more powerful amps of that era. However, there are some design features that made the Bassman a better guitar amp than bass amp. First of all, it had an open back, (when was the last time you saw an open back bass amp?) not an ideal situation for reproducing bass frequencies, but great for guitar. The two channels, one for bass and one for instruments, were designed knowing that many bands of the era shared amps. This second channel was and is the guitar sound that many of us marveled at for years on so many recordings.

The bottom line is, that Leo made a less than great bass amp that is a great guitar amplifier. Great mistake #1.

Leo Fender does it again!
I list some more of Mr. F’s miscalculations here.

The Stratocaster, arguably the most important guitar in rock and roll history, was originally thought of by Leo as the perfect guitar for his favorite guitar player in his favorite band. The guitar player was Eldon Shamblin and the band was Bob Wills and the Texas Playboys. Those of you not familiar with the aforementioned band and guitar player they were a western swing phenomenon of the 30’s and 40’s with a very big following in California. Leo wanted to create a guitar that would fit into the sound of the band whose music at the time was fertile ground for arch top jazz boxes. So Leo’s Stratocaster was supposed to be a jazz and swing guitar. I ask again when was the last time you saw a jazz or swing guitar player strumming four to the bar on a Strat?

One more from Leo:
Ah yes the Jazzmaster, I guess when the Strat didn’t make the grade with jazz guitar players Leo figured if I put the word jazz in the name that might make jazz guys wanna play them. Again Leo failed at creating a jazz guitar. History tells us that the Jazzmaster as was the Jaguar were copied incessantly by overseas guitar makers. They being so impressed with the upper end, Fender decided to copy them instead of the more popular Stratocaster, another mistake that has went under the radar.

Gibson gets into the mistake game too.
When Fender came out with the Telecaster and it became popular, Gibson said we must get into the solid body guitar world. We all know that Les Paul was consulted and in 1952 Gibson’s first Les Paul showed up. Legend has it that Gibson, a builder of top end arch tops and flat tops could not see themselves putting the Gibson name of a no frills slab of wood with a screwed on neck. So they insisted that their loyal Gibson customers would want the solid body guitar to have an arched top like their “box” guitars.

So they made a two pickup solid body with an arched top and a fancy gold top.

The guitar was not well received by players, as a matter of fact the Gibson players they were after, and thought the guitar was a non responsive, heavy guitar, especially with the 1952 trapeze tailpiece that made it impossible to mute with your right hand. The players who were the new solid body rebels saw the Les Paul as an overpriced, ornamental, non cool guitar.

One aspect of the Les Paul design that has been debated over the years was did the arch top on a solid body guitar actually make a difference in the sound and was the difference a better sound? That question I will leave to you to answer yourself, my opinion is that all design features affect the sound somewhat.

Interesting subtext to the Les Paul legacy is that when Gibson introduced the SG style guitar, players started cramming to get old design Les Paul’s. Gibson seeing this, eventually reintroduced the Les Paul in 1968 after a seven year hiatus.

Another cool mistake was that when Gibson came out with the circa 68 Paul’s they had leftover stock of Les Paul bodies from the 50’s that were already routed for the P90 pickup. The dilemma was that the new humbuckers did not fit the hole in the body. Gibson thought, what do we have in stock that would fit into this P90 hole? Well after acquiring Epiphone (1963ish) they had a stockpile of Epi’s venerable New York mini hum buckers. They made a plastic ring around the pickup to retrofit it into the P90 rout, and figured we might as well call it something different hence the Les Paul Deluxe!! (Didn’t you ever wonder why the Deluxes were initially all gold tops?)

So I think that great ideas sometimes are not necessarily what they were intended to be, but are still great ideas!

Here are some of my own off the wall ideas…

That’s it for now! Keep on strumming and remember Joey Says Experiment!!! 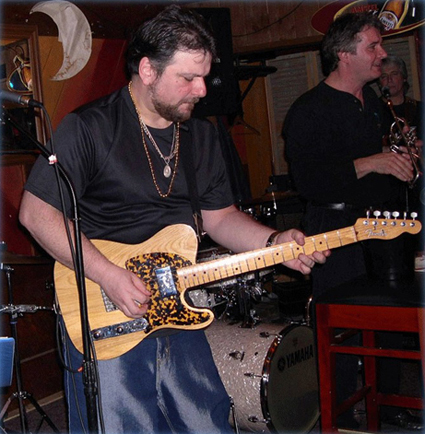 Joey Leone with his Fender Telecaster

8 thoughts on “Great Mistakes in the World of Guitar”