Who has the time to watch all the video demo’s at Eastwood Guitars?. For those who don’t, every Sunday we are posting a single video demo paired with a recent review from Harmony Central. This week it is the Airline H44 DLX being taken for a test drive by April Wine guitarist, Brian Greenway. Enjoy!

Features : 10
The features should be well known from the reviews below. I bought two of them. A copper colored two PU DLX and a black one PU STD (black with two PU’s are sold out until december this year.)
I liked the slide sound of them so much but i’m not really a good slider.I’m a better lap steeler. So i customized one into a lapsteel (even a fake pedal steel). I mounted a higher nut and a “Duesenberg Multibender” bridge and it sounds amazing.

Sound : 10
I’m playing blues and if you do too, than this is the guitar to go for! The model with two pick ups is so versatile.
I’m playin them through a Fender Hot Rod Deville 4×10. Nothing special on the floor but a Ernie Ball Volume, a Whammy for octaving and a TS808. Compared to my Gibson Les Paul Std the sound is a bit warmer and got more bass. I could not say wich one sounds better… the 3000 Euro Gibson or the 300 Euro Eastwood. I actually bought it as a back up for the Gibson… it’s got my main guitar at the time… Amazing

Action, Fit, & Finish : 10
I mailed with Mike from Eastwood a few times and he told me that the H44 is the only model in their program under USD500,- made in Korea.
No flaws, nice finish. Setup was fine. I used that little trick with the ducktape for the bridge wich is loose on the guitar like on the original, so i would not have to calibrate so often. Works great.

Reliability/Durability : 10
Sturdy workhorse… you can play shows, or baseball with it. You even could defeate conan the babarian with it and play on.
I do not have the feeling i have to watch out all the time to keep it in mint condition. I think this is the kind of guitar where one will like every scratch, dent and ding that happens during touring. I’ll do.

Customer Support : 10
Contact Mike… absolutely fast and friendly. When i wrote him the first mail concerning shipping to Europe i got an answer within two minutes. He must have a blackberry in his pocket ore something like that!

Overall Rating : 10
I started playing when i was five years old, thats 24 years ago now. I’m a professional since ten years now (former major recording artist now indiependend and more happy). Got a couple of other guitars from larivee parlor acoustics to sitars from india. My current live set consists of a gibson les paul std hb, a epiphone j200 (’96 korea), a hoefner jazz guitar from the fifties and my two H44’s from Eastwood.

I came to the Eastwood Site cause of the replica of the airline 3p dlx. A friend of mine is playing a white original on stage. I wanted to check out the replicas and watched many video reviews on Eastwood Guitars. The H44 review and sound was so standing out, that i forgot about all the others and went for the H44. I might get a Tuxedo and a Airline sometimes but I’m not a lawyer hanging guitars behind glass in his office… so I’ll need a reason to purchase 😉 I’m shure I’ll finde one soon. 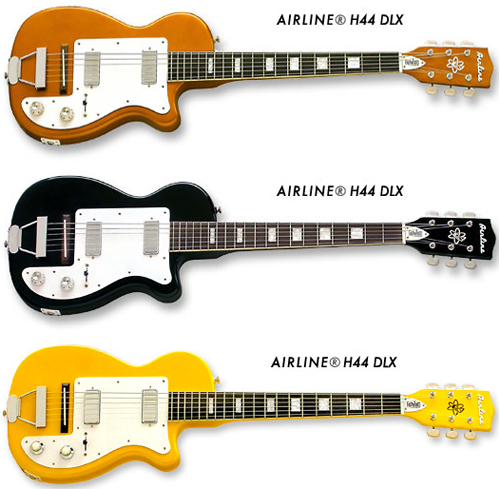