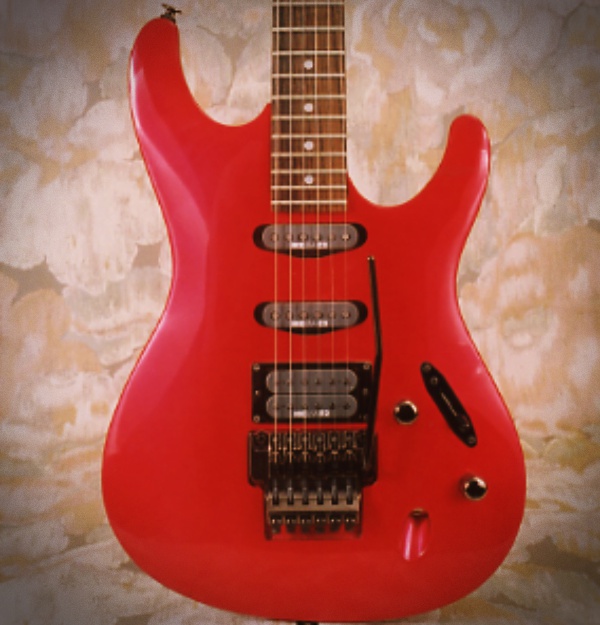 Back at the beginning of the 1980s I became enamored of the New Wave of British Heavy Metal (I didn’t make that up; that’s what it was called) and especially the sub-genre that emerged from it called “neoclassical metal.”  Music by the likes of Randy Rhoads, Tony MacAlpine, Yngwie Malmsteen, etc.  So, naturally, a little later, I became interested in guitars especially designed for shred-meisters…and those wannabees who actually had to buy their own guitars.  The Ibanez Saber was one of my favorites.

Neoclassical metal has nothing to do with classical music in general, except maybe that sometimes it reminds me of Chopin or maybe occasionally Bach on steroids.  And, that it almost never employs the blues scales so ubiquitous in rock.  Nor does it have much in common with classical guitar—an idiosyncratic finger-style learned from musical scores—except for one thing: classical guitarists and many neoclassical shredders like wide, flat (almost no radius) fingerboards.  This is certainly not universal, for metallurgists, at least.  Narrower fingerboards with a decent radius fit the hand nicely when you’re chording.  Wider, flatter fingerboards make it easier to play fast melodies, keeping the notes clean and separate.  Since I play classical guitar, it was natural that I’d be at home on a guitar built for shredders.

However, I probably would never have known this piece of arcane obscuranta had an art director I worked with at an advertising agency not played in a band.  He favored his Stratocaster, but his working-horse guitar was an Ibanez Saber.  I was the copywriter, so we were the “creative team.”  On rare occasions, between jobs, we’d jam a little, to get our creative juices going.  Every once in a while a nearby conference room would be in use and the account executive would come in and ask us to turn it down.  Yeah, right!  Everything up a notch…  In any case, as a guitar player, I found myself mildly competitive with my team-mate, so I was mightily pleased when I, too, got ahold of my own Ibanez Saber.

The Saber was part of the 1986 Ibanez Pro-Line Series that essentially replaced the Roadstar II line of guitars.  It was the Roadstar II line that really established Ibanez as a powerhouse guitar brand—partly for the quality and style of the guitars and partly because they hit the market in the early 1980s just at the time that most young guitar-players couldn’t remember the resentment against Japanese products that lingered in Americans for many years following World War II.  With the Roadstars, Ibanez finally began selling enough guitars to become really profitable.

The Pro-Lines weren’t necessarily an “improvement” so much as a next evolutionary step.  I don’t know exactly why they ware called the Pro-Line but Ibanez was beginning to garner a lot more professional endorsements, and the Pro-Lines were what a lot of them played.  The top of the line was the magnificent 1770, with sleek lines and push-button controls.  The others included a trio of uniquely styled SuperStrats: the super-thin-bodied Saber (played variously by Frank Gambale, Jennifer Batten, Reggie Wu, Scott Henderson, Larry Mitchell), the teardrop-shaped Radius (which would become the Joe Satriani signature guitar), and the Power, kind of reverse offsets (played by Alex Skolnick).  All were perfect for the virtuosic styles popular at the time.

The Saber was/is a remarkable guitar if your taste runs to light-weight and powerful.  That super-thin mahogany body is almost invisible, a mint that melts in your mouth.  The neck is also pencil-thin but relatively wide and flat, perfect for blazing runs.  These necks are really fast if the action is set up right.  The pickups are IBZs, which was a collaboration between Ibanez USA and DiMarzio, and they’re screamers.  Finally, these had Ibanez’s “The Edge” version of the Floyd Rose locking vibrato, a knife-edge unit that’s feather-touch sensitive, if you like that sort of thing.  I don’t dive-bomb, so I’m happy with a Mosrite, but the Edges are sweet.

The Saber, Radius, and Power lasted as such through 1990.  By 1991 the Saber had become the Frank Gambale FG series, the Radius had become the Joe Satriani JS series, and the Power was gone.

Also in 1991 Nirvana released Nevermind and music changed.  Oh, all the fine neoclassical metal players continued to play.  Some changed styles, some didn’t.  But all of a sudden guitar players wanted funky pawn shop guitars, “alternatives.”  For the next few years guitar-makers struggled to figure out “what’s next” and always seemed to be 2 steps behind.

I liked those new guitars, too, but then I like pretty much all guitars, so that means nothing.  I never did learn to shred.  Maybe I will some day.  Still love that Ibanez Saber, though.