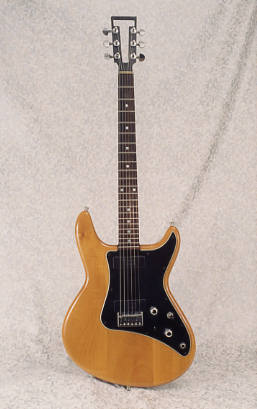 There are any number of things I associate with pickup trucks (from Handicaps to gun racks), and guitars aren’t one of them.  Yet—as anyone who’s followed the recent advertising battle between the Ford F-150 and its competitors—the two sometimes flirt with the use of aluminum to optimize performance.  Certainly there more than a passing relationship between this Travis Bean TB500 and motor vehicles.

Now, Travis Bean may have owned a pickup truck, I don’t know.  But he for sure was interested in motorcycles, which he apparently raced and presumably worked on.  And it’s almost impossible not to conclude there was some crossover influence between working on motorcycles, being a machinist, and putting aluminum necks on guitars.

However, Travis Bean wasn’t the first to put vehicles and guitars together.  Back in around 1959-1960 Wandré Pioli—another motorcycle fanatic—began making aluminum-necked guitars in Milan, Italy.  Those were way cool, with weird body shapes and exotic one-off paint jobs and great names like “BB” (for Brigit Bardot!).  Some other Italians—well, depends on what you consider Sicilians who emigrated to Paris—the Jaccobacci brothers also used aluminum necks.  As far as I know, they had no interest in either motorcycles or pickup trucks, though I may be wrong about that.  It doesn’t show up in the biographies.  A little later in the 1960s—and I believe totally independently—John Veleno in Florida also used aluminum to build guitars.  He built the whole shebang out of aluminum.  I don’t think John was into motorcycles or trucks either.  He was actually a music teacher who built a guitar-shaped aluminum sign as advertisement.  A friend suggested he make a real guitar out of aluminum, so he did.  In 1967 the Messenger company of San Francisco briefly made guitars with aluminum necks.  (Eastwood offers wood-necked versions of the Wandré and Messenger guitars.) 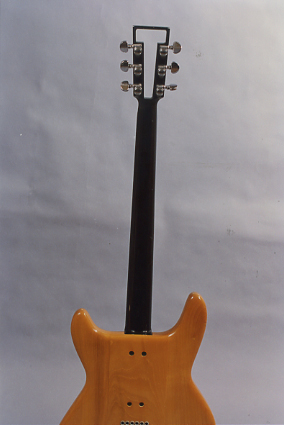 Anyhow, in 1974 the Travis Bean guitar concept was born.  The story is somewhat confused, obfuscated by the passing of time and varying accounts.  Bean apparently teamed up with a guitar repairman named Marc McElwee and Gary Kramer.  Kramer’s telling, given long after, has himself as the main money man and sales department.  The chronology is a bit muddled.  According to Kramer, Bean kind of lost interest before things got off the ground.  Kramer left in 1975 to start his own aluminum-necked guitar company and according to other accounts actual guitar production didn’t begin until 1976.  When the company closed down in 1979, a little over 3600 guitars and basses had been produced.

There were basically four Travis Bean models: the TB500 seen here, the slab-bodied TB1000 Standard (the most common), the carved-top TB1000 Artist, and The Wedge, whose shape you can readily imagine.   These got heavy coverage in the guitar press of the time and a lot of big stars toyed with them, including Keith Richards, Jerry Garcia, Stanley Jordan, Ace Frehley, and Slash, to mention just a few.

The TB1000s had teak bodies.  They are exceptionally cool, but also very heavy.  You’d best be in good shape to sling one around an arena rock show.  The TB1000s had humbucking pickups. 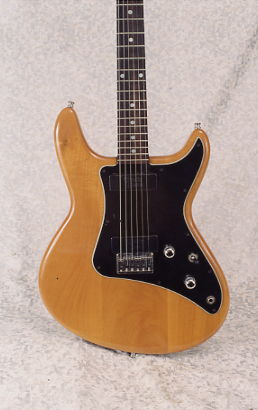 The Wedge and the TB500 models are pretty rare birds.  This TB500 was meant to be a less expensive guitar.  This one (#234, 1978) was made of magnolia wood and is considerably lighter weight.   These have single-coil pickups.  I’ve played this guitar and several Standards.  While both models are pretty nifty, I found the TB500 to be a little white bread compared to the Standard (and presumably the Artist, which was just a bit fancier version), but there’s no accounting for tastes, as they say.  Both certainly did give you plenty of sustain.  Then again, the older you get, the less interested you are in a heavy guitar!

The skinny on Beans at the time was that the aluminum  was sensitive to temperature changes, although I’m not sure if that wasn’t more about conservative guitarists trying to find a reason not to like them.  I do know that John Veleno found resistance to the feel of an aluminum neck.  That was part of Gary Kramer’s “improvement” of putting in wooden inserts on the back.  In any case, Travis Beans were a pretty interesting episode in guitar history.

In 1999 Bean announced a big comeback and a revival of the legendary Travis Bean guitars.  There were pictures of revamped, very fancy guitars that I presume were of prototypes.  I’m pretty sure the line ever made it into production, and the aluminum-necked Travis Bean guitars sank back into legend.  (Clifford) Travis Bean passed away in 2011 at age 63.  Both the Ford F-150 and Travis Bean guitars used aluminum to improve performance, albeit for completely different reason.  Even after all this time, the jury’s still out on that!