The big daddy out of New Jersey in the 60s was Ampeg. While they never made much of an inroads into the guitar market (though the Plexiglas was radical), they were the East Coast’s answer to Fender for much of the 50s and 60s in amplifiers. And, come flip tops and, later, SVTs and they actually surpassed the king of Fullerton in bass amplification.

But New Jersey had a few other great (albeit minor) amplifier companies of the 60s and 70s. You had, from various divorces from the Ampeg company, Stanley Michael’s great Sano company of amps and, later, Jess Oliver’s line of amps (under his name and briefly, a few rare ones under the “Sam Ash” brand in the late 60s). The solid state Andre amplifiers are a surprisingly good sounding series, founded by former Ampeg troubleshooter and designer Gene Andre. It seems like every great amplifier company in New Jersey had some ties, at some point, to the Ampeg Company.

Every one, except (perhaps, maybe—there’s not much written about them) the Hilgen company. Hilgen, by anecdotal evidence at least, did not make a lot of amps and they didn’t make them for very long. They did, however, make them very well, and they made (however briefly) some stunning looking and sounding guitar amps. Like late 60s and early 70s Sanos, many models of Hilgens sport great “swirl” paint grills reminiscent (surprise) of late 50s Ampegs.

They also sport circuits that could have been (and may have been) Xeroxed from Ampeg schematics.

While everyone in California was making amps with 6V6s and 6L6s, and everyone in Chicago and Michigan was using 6V6s and 6L6s and the occasional EL84 (Lectrolab and Gibson/Kalamazoo), it seemed the Jersey makers alone who were finding a good use for the 7591 output tube (although, Kalamazoo/Gibson DID use this one for a couple of models, notably, the super underrated BASS 30, a twin 10” amp that sings with a guitar).

After a few Jets and Reverberockets rolled off the line with 6V6s in 1964, Everett Hull (head of Ampeg) got complaints from Jazz players (his main clientele) that the amps were breaking up too much. From then on (until the monster early 70s amps that the Rolling Stones made famous), the Ampeg Jet and Reverberocket sported the sturdy (and cleaner, at least for a while longer, headroom-wise) 7591 tube. In between a 6V6 ad a 6L6 in output-wattage, the 7591 turns out (while rock-and-roll-hater Everett Hull spins in his grave) to be a fabulous sounding tube under breakup. In the right circuit (and, as Mack amps designer Don Mackrill so rightly points out, it’s the design, more than any other factor, including the tubes, that defines the tone….still, the tubes play a part and they do have different characteristics), a 7591 is a killer rock and roll tube. Push a Reverberocket past its intended operating point and you have yourself an amp that is just as great sounding (in its own way) as a Blackface Deluxe Reverb.

Unfortunately, the secret is out on the Reverberocket. What cost $350 two years ago and $450 last year is now up to around $600-700. Soon, I won’t be surprised to see Jets and R-Rockets going for a grand. They are amazing sounding amps—built like tanks.

But where does that leave all of us cheap, gear addicted tone freaks? Looking for Hilgens (or Sanos…see my earlier column about the Sano Twin Twelve in the archives…another awesome amp on the cheap), that’s where! 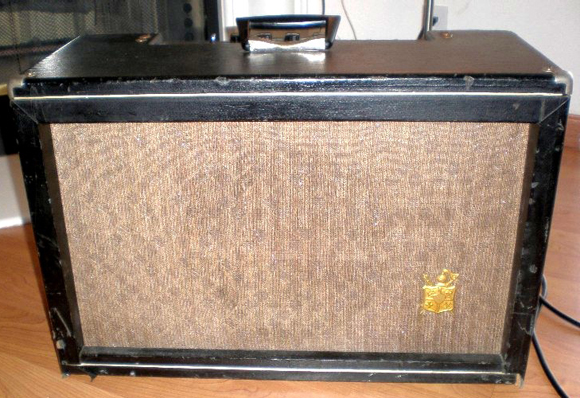 The Hilgen “Victor” Model R2522. For the tube geeks among us, this starts with a 5AR4 rectifier before running into a couple of 12AX7s for preamp and reverb send duties. Then comes the only expensive and hard to find (although not impossible) tube—a 7199 for ‘verb recovery. From the factory, it came with a 12AU7 for phase inverter, which I switched out to a 12AY7 for a little more drive on the output tubes. I tried going up to a 12AX7, but that made for too much gain and resulted in a mushy, compromised output. The 12AY7 gives it more heat than stock, but still retains the crisp, tight, articulate character of the amp, as intended. 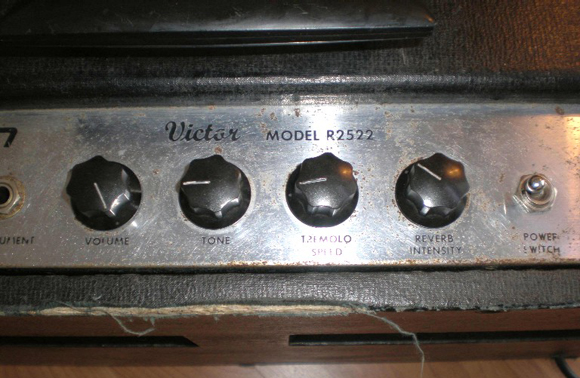 The controls along the top (from L to R): Volume, Tone, Speed (tremolo depth is pre-set), Reverb. And it’s got that cool grill cloth with the odd crest (?!) in the lower right corner.

Up to halfway on the volume, it’s a lush, deep, rich, plumy clean amp (remember, it was designed for Jazz and clean headroom). Over half-way, pushed more that it was supposed to be, the amp comes alive at a sweet rock and blues machine. It’s a loud little amp—probably just a little bit under a Deluxe Reverb for gig volume. The distortion is rich and creamy, with a fair amount of grit, yet it still maintains the crispness and tightness for articulate chords and voicing. This is a fabulous amp, with one of the riches reverbs around. The tremolo is good—but not great. It lacks the depth of a classic Valco or Danelectro tremolo, but it still has a nice tone to it, overall. 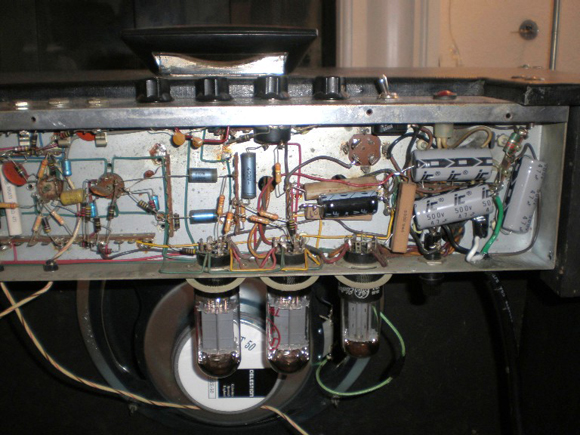 Originally, the Victor came with a CTS ALNICO speaker. It’s a fine sounding speaker, but I replaced it with a more efficient Celestion Vintage 30 for a little better output and punch for gigs. For a loud show, I’ll run this and a Deluxe Reverb together—a monster sound out of two amps that weigh under 35 lbs each. Can’t beat that.

So, grab a Hilgen now, while they are still affordable. They tend, right now, to go for between $300—400 (though sometimes they can sneak in around $250 if they are poorly listed on eBay). They’re well worth it, work and sound-wise. It’s a beautifully made, hand-wired amp that would go for between two and three grand if it were being made in the boutique market today. Grab one for under $500 while you can. Start looking—they don’t come around often, but they’re well worth the hunt. Get yourself a Hilgen, and drop me a line when you do.