Maybe it was punk rock, with its rejection of good guitar playing. You know, any old bloke can bash on a guitar and who cares if it’s in tune. More likely it was punk’s more popified successor New Wave which opted for tasty yet understated guitar textures (in tune), though still without the slashing guitar solos, matching costumes accepted. Think Andy Summers and the Police. Whatever the cause, right at the beginning of the 1980s a new type of guitar appeared on the scene. An understated, minimalist guitar with no head, like this 1986 Ibanez take on the form, the Axstar AX75!

While Ned Steinberger is generally the luthier most associated with the appearance of the headless bass and guitar in 1979, the minimalist concept his guitars reflect should really be seen as an evolving process. Back in the late 1930s Les Paul began analyzing the notion of an electric guitar and came up with his famous “log,” an Epiphone archtop that he cut the sides off and inserted a solid chunk of wood to eliminate feedback. His audiences couldn’t get used to the idea, so he had to screw the sides back on for performance, but he was clearly searching for the minimum needed for a good guitar.

There are no doubt other examples. Arguably lap steel guitars built since the early 1930s also fit this description. They’re little more than a chunk of wood or aluminum representing the string length of the guitar, with a pickup and tuners that could go at either end of the instrument. About as basic as you can get! 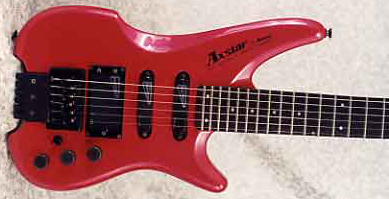 The idea of a minimalist electric Spanish guitar resurfaced again in 1967 when Dan Helland, a guitar player and teacher in Green Bay, Wisconsin, reached a conclusion similar to, but likely independent of, Les Paul’s, deciding a guitar could be no more than a neck stuck on a 2×4. Somehow he connected with the Holman-Woodell guitar company of Neodesha, Kansas, who were at the time manufacturing the solidbodies marketed by Wurlitzer out of Chicago. His design called for a neck stuck on a square slab of wood yielding the famous La Baye 2×4 guitars and basses. He had about 45 of these made and took them to the 1967 Chicago NAMM show where he sold zipity doodah. Helland gave up guitar design and became a photographer.

A little bit earlier another fellow named Dave Bunker of Puyallup, Washington, began to turn his thoughts to a better guitar idea. Bunker (yes, Bunker Hill is named for a relative!), born in 1935, began playing guitar in around 1949 and in around 1951 started teaching in Puyallup. The in 1955 he saw the traveling demonstration show put on by the great tapping guitarist Jimmie Webster and Dave adopted that technique. Conventional guitar design is not optimized for tapping, so naturally Bunker began to experiment and in around 1961 started making his own guitar designs. One of his ‘60s inventions was the idea of the “tension-free” neck. Basically this consisted of a heavy brass nut fixed to a thick brass bar that was attached to another block of metal in the body. A wooden neck was routed out and slipped over this brass core. Strings were anchored into the nut and stretched down to tuners on the butt end of the guitar. The brass neck core took all the tension of the strings, keeping the wooden neck free of any tension whatsoever. Like Les Paul’s “log,” Bunkers guitars often had variously shaped wings that could be bolted on to give more of an illusion of “guitar,” but he was getting down to the bare minimum!

One other name that should be mentioned is Allan Gittler (1935-2003). In the mid-‘70s Gittler began to really, really get to the minimum of what a guitar was to be. In around 1975 he introduced the Gittler guitar, basically a skeleton. The body was a steel tube, with tubular nut/string attachment, tubular frets, about as low as you could go and still have a guitar!

In around 1985 Ibanez found its sales flattening out and needed something new to pep them up. The result was a new series called the Axstar. Two models were conceived, both to be made for them by Chushin in Japan, rather than the usual Fuji Gen Gakki. One was popularly called the “shark” because of its obviously finned shape. The other was this headless, commonly called the “battle axe,” designed in Bensalem, PA, by Ibanez’s then chief designer Mace Bailey.

There’s actually a lot more to this guitar than just another headless wannabe. It has a carved maple cap over an alder body, for one thing. Secondly, there’s a two-octave fingerboard. Then there are the low-impedence pickups pumped through active electronics with bass and treble cuts for tonal control. Always a winner! The picture is completed with a Steinberger-style bridge assembly. Only somewhat derivative, with enough to make it pretty interesting.

And pretty rare. It’s not known how many of these were produced, because Ibanez production records only exist for the Fuji factory, but not many. Neither Asxtar solved Ibanez’s sales woes. Their next attempt at jump-starting things was the wonderful Maxxas, but that’s another story for another day…

In any case, despite the respectable power train and the sophisticated construction, with no head, the Axstar deserved to be included among the classics of this understated art form!