There’s a lot of bad information on the internet, as I was reminded while trying to resuscitate a recent score: a Silver Sparkle 20th Anniversary Squier Jagmaster. 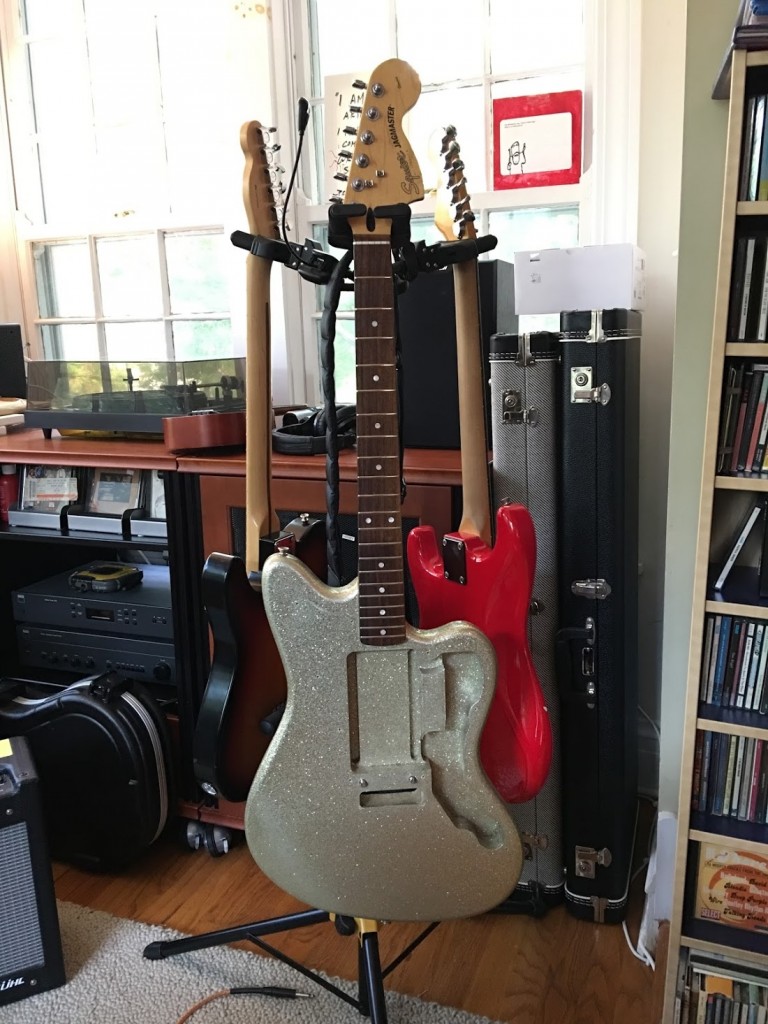 It’s not a guitar for everyone, but I bought my first about five years ago when I started playing guitar again as an adult. It was fun and cheap, and with a little bit of elbow grease it cleaned up nicely and, after a pro setup, played great. Then I set my sights on more “appropriate” guitars and got myself a Fender Highway One Stratocaster, you know, a proper “dad” guitar.

Selling the Jagmaster was a mistake (as my daughter frequently reminded me), and when I had some “mad money” recently, I started searching for a replacement. A couple weeks later, I picked one up through Reverb.com. It was a little more expensive than I would have hoped and rougher than I expected. The strings were crusty, every tuner and bolt was loose, and the pickguard was warped. But the electronics worked, the neck was straight, and there was almost no fret wear, though they were dull and a little rough.

All that stuff is easy enough to fix as part of a regular cleanup and restring. This one needed a little more, and in addition to my new and regularly applied Dremel and Nu Finish fret polish routine, which I’ll show next, I decided to fix the damn pickguard. I reckon if a third of a guitar’s face looks off, it’s going to show. And at the very least, it’s going to gnaw at me. Forever. Or until I’m done losing sleep over it and fix it, so why not do it now?

A quick Google search brought up no shortage of bad ideas, all suggesting that you essentially bake the pickguard and, before it melts, burns, discolors or sets off the smoke alarms, pull it out of the oven — careful not to stretch it — and stack books on it till it cools and lays flat.

If you’re inclined to follow that advice, I’m going to guess you don’t have enough books around to pull off that stunt. That said, follow the steps below at your own peril, as I did, and don’t do this to a vintage instrument.

Here’s how I fixed a warped pickguard: 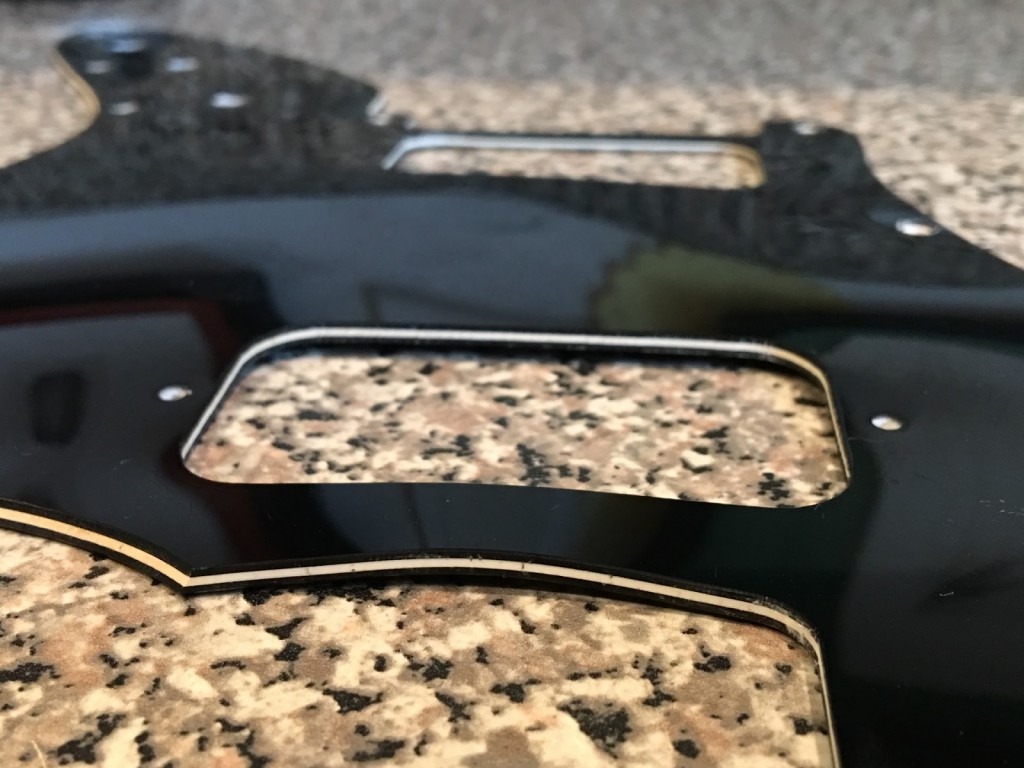 Here you can see the bowing of the pickguard

2. Clear some space and wash the dishes in the kitchen sink. You’ll want the room to work, and you’ll score some points with the wife or roommate.

3. Find a cookie sheet or cutting board that’s bigger than your pickguard, but that fits in your sink. 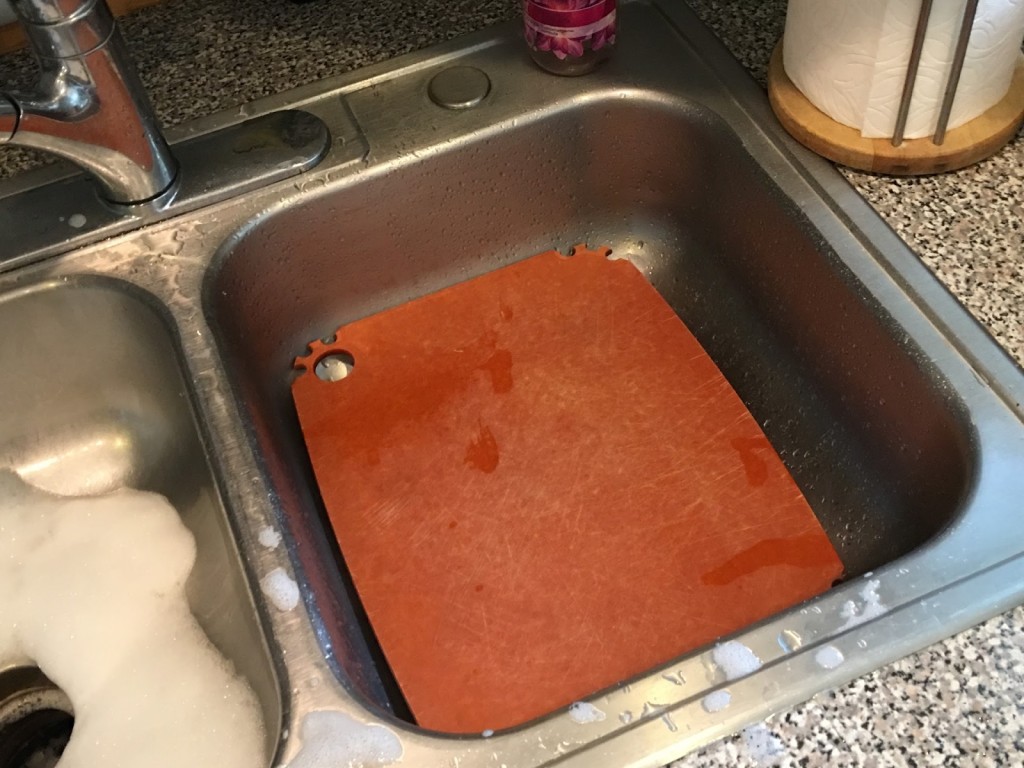 4. Boil some water – enough to fill the sink and cover the cutting board and pickguard with another inch or so. I used a kettle and the biggest pot we have to boil some more. 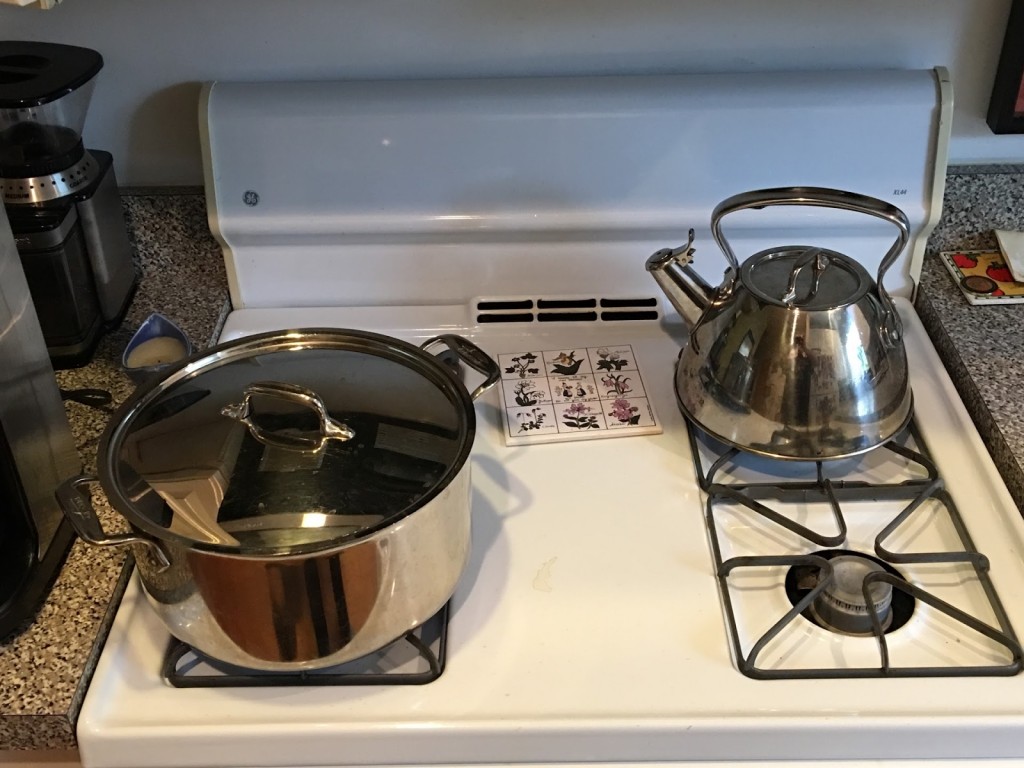 5. Put the cookie sheet/cutting board in the sink, and place the pickguard in face down, so you don’t scratch it up like I did.

6. Pour the boiling water over it, then put the pot, with the hot water in it, on top. 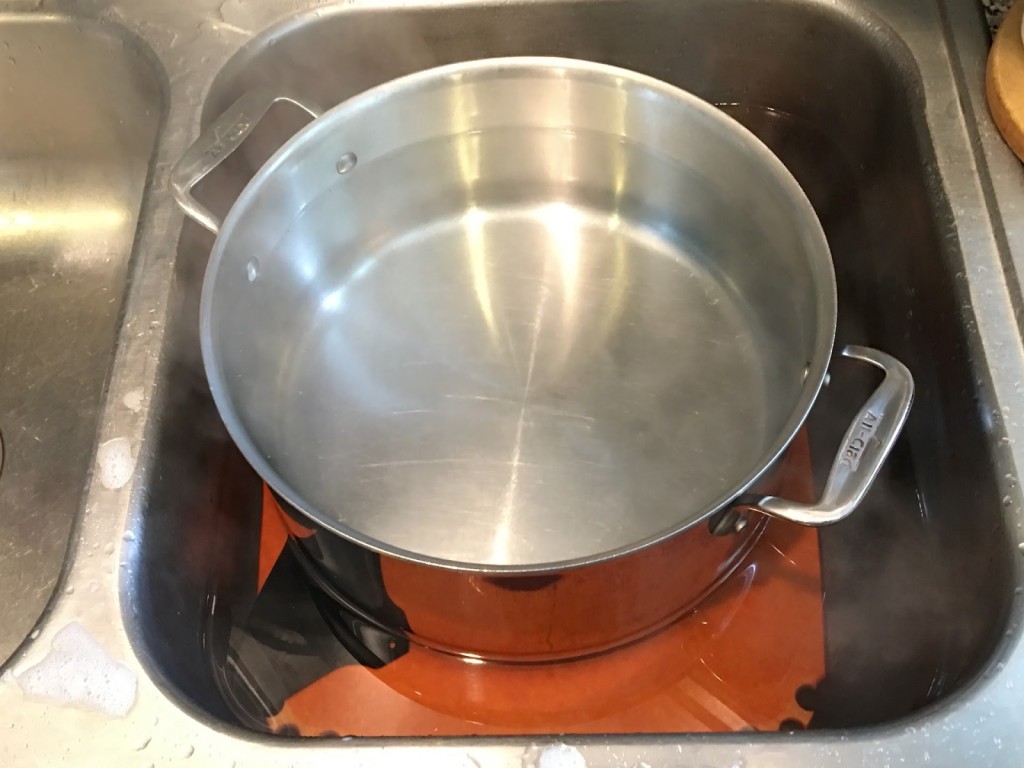 8. Remove the pot, then the cutting board with pickguard, and re-stack them to cool. 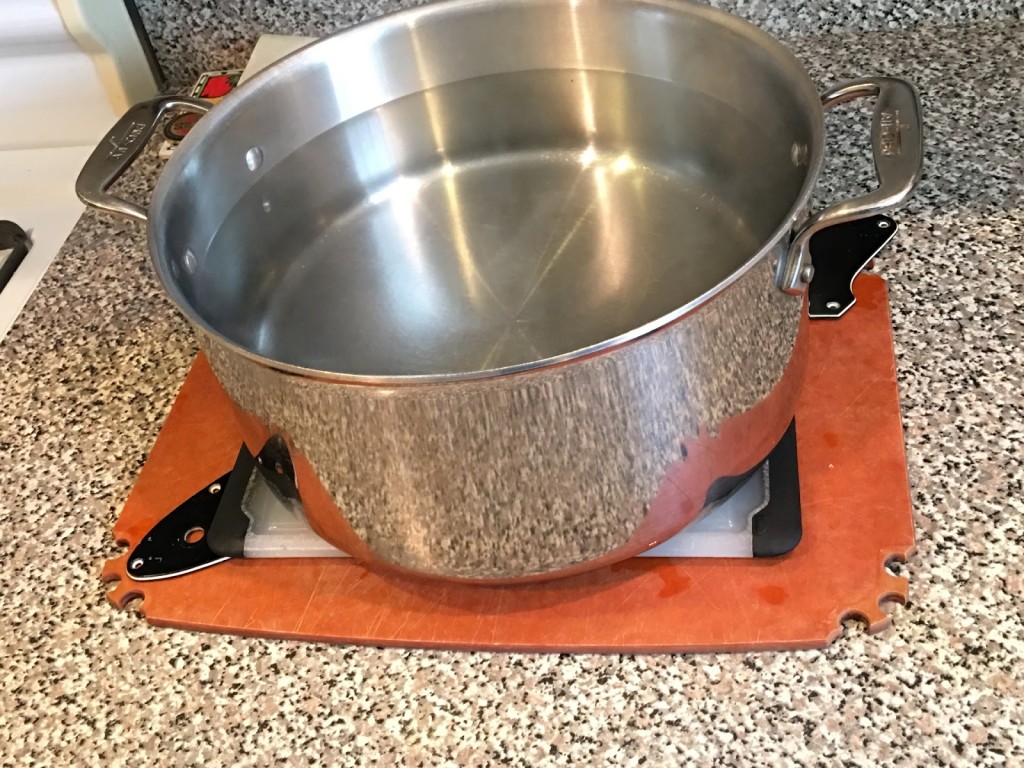 I let the whole thing cool for about 10 minutes after 2 minutes in the sink. 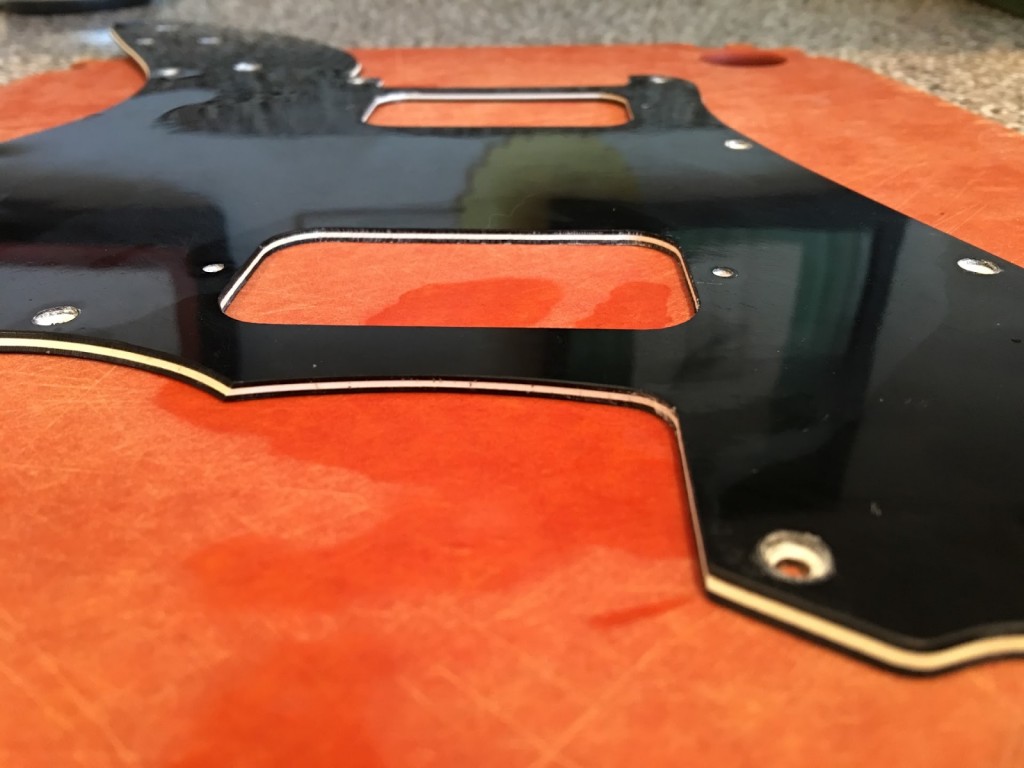 There are more than a couple benefits to using hot water rather than an oven. It’s a lot more controllable, as you can see the pickguard throughout the entire process, and the timing is flexible without introducing the possibility of smoke, fire or nasty fumes.

10 thoughts on “How to Fix a Warped Pickguard”