The guitar is a beautiful instrument. Whether you play Classical or Jazz, Folk Music or Rock
Music, there is no instrument that is easier to learn, nor is there one which creates such a
variety of voices and sounds. 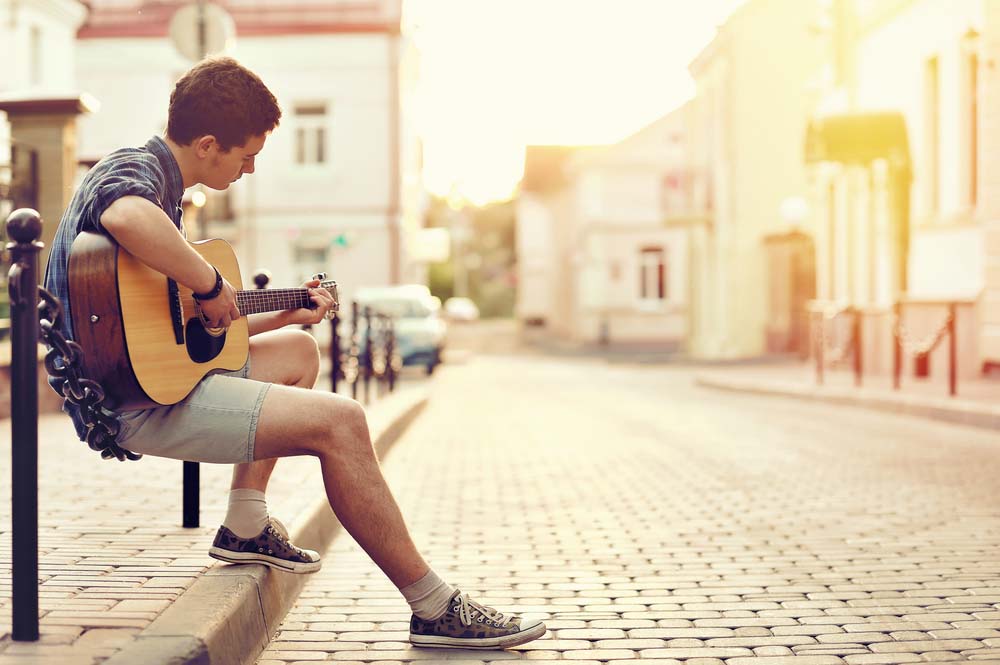 If You Want to Be a Guitarist …

Once you have fallen in love with the guitar and what it can do, there is really no single
correct way to learn to play. Some of the most famous guitar players taught themselves, by
listening to their favourite guitarists. How do you do that? How can you just pick up a guitar
and learn how to play it?

Here are five tips for the beginner guitar player:

Tip No. 1. Learn About the Instrument First.

The guitar has a long history of development, with some scholars saying that the modern
guitar is an ancestor of the Lute or the Greek Kithara. Others say that the modern guitar
developed from the Egyptian Tanbur. Whatever the truth is about the guitar’s history, there
are many types of guitar. Acoustic guitars, classical guitars, steel string guitars, flamenco
guitars, electric guitars. There is a type of guitar for almost every type of music that can be
played.

It is important to learn about the instrument that you are going to play. Beginner players may
need to learn about the parts of the guitar from the head-stock to the sound-hole to the
bridge. It’s necessary to learn how to string and re-string a guitar and to learn which kind of
strings your new guitar will need.

Beginner players also need to learn how to keep their guitar in its best condition. This means
learning how to clean it and where to keep when it is not in use.

It is said that there are 2,341 chords in total that can be played up and down the neck of the
guitar. For beginners, the most important chords to learn may be the open chords. These are
the chords from C to B that can be played without the need to barre the strings. By learning
to play some chord combinations in varying keys, the beginner player will get a sense of how
songs can be create. They will also learn some of wonderful songs that have already been
written. A sense of rhythm starts to develop naturally as the beginner player strums the
chords.

Tip No. 3. Learn Some Strumming and Finger-picking Techniques.

Most guitar players develop their own sense of rhythm and a strumming style. This is part of
the creativity that grows as a person learns to play any musical instrument. The beginner
guitar player needs to learn coordination, or how to fit the chords he/she has learned into the
rhythm of the music. This means fitting chord changes into a key signature such as 2/4
timing, 4/4 timing, 3/4 timing, 6/8 timing. There are many timing patterns that music is played
in. It’s a good idea to learn some simple finger picking patterns early on as well. This can
give the beginner another way of hearing timing, as well as extending their technique and
flexibility.

Tip No. 4. Learn Some Songs and Easy Pieces of Classical Music.

Learning songs is a good way to bring all the techniques together.It makes all of the more
technical learning worthwhile. As the beginner player learns how chords become songs, it is
also a good idea to learn the individual notes of each string up to the first three frets at least.
By doing this the guitar player learns which notes are in each chord. The first barre chords
that the guitar player will learn are usually the barred F Chord and the barred G chord. These
chords are played on the first and third frets respectively. This ties in with learning the notes
of the first three frets.

Tip No.5. Practise Every Day.

For people who love playing the guitar this will not be difficult. Practice is important, not so
much because practice makes perfect, but because practice leads the guitar player forward.
There are many songs and many pieces of music that can be played on the first three frets of
the guitar. Frequent practice opens the keyboard up to the player. Suddenly, you understand
that riff by one of your favourite guitarists. Suddenly you can play some licks that you never
thought you would be able to play. Unless you actually dislike playing the guitar, which is
highly unlikely, practice is not a chore. It is the time when you sit down and have fun with a
guitar. Well, maybe practising scales is not a lot of fun.

So those are my top five tips for beginner guitar players. Going through the five stages of
learning could take up to two years. In those two years a beginner player will be well on the
way to being a good player. My last tip is to listen to great guitar music as often as possible.

http://guitarreviewed.com is site that offers lots of information about acoustic guitars to those
who wish to buy a first or even a second instrument. The review of each guitar includes a
photograph of the guitar, followed by a description of the guitar’s features, its price and the
things about the guitar that were either Liked or Not Liked.

Hi, my name’s Joe. I was born in the 1980’s and was inspired by rock musicians such as Eric
Clapton, Jeff Beck and Carlos Santana. I also like the sounds of Classical Guitarists such as
John Williams. I write the acoustic guitar reviews on Guitar Reviewed and I sit down to play
the guitar every day, because I love the guitar.