I’ve already done a column about all the great equipment I lost in my drunken stupid years (as opposed to my current sober stupid years). It was, in its own way, a fun piece to write…a catalog and inventory of all the VERY cool guitar stuff (guitars, amps, pedals and so on) I let go for gas money, drug money, and/or stuff I left in apartments I wasn’t allowed to return back to either by landlords, ex-girlfriends, or sheriff’s departments up and down the east coast.

A legacy of my idiocy.

What’s strange is that it’s probably the column I have received the most mail on. People from all over the world wrote me about equipment they’d lost and the interesting ways they lost their stuff. They were all GREAT letters. Sad yet entertaining. We all had a story or two or twenty. It was like a gear geek AA meeting. ‘My name is so and so and I lost a FILL IN THE BLANK.’

If you put us in a room, I’m sure we’d wince at the equipment and the amazingly low price our brothers and sisters lost it for. We’d hug each other and pat backs and shake heads and bond over how dumb we could be. (Maybe we SHOULD start a ‘lost gear’ support group.)

The funny thing is, while I can go on and on about great gear I’ve lost, I rarely tell the stories of how lucky I am to have the gear I do have (especially now that I don’t sell AC30’s for a zip lock bag with what are SUPPOSED TO BE 20 Percocets!!! It’s bad enough to be dumb…but to be dumb and ripped off…wow.) But people who trade AC 30’s for disguised stool softener pills get what they deserve, I suppose. But back to the topic at hand: Lost cool gear.

Until VERY recently, I had a fond memory for this very cool multi-effects unit I bought at a yard sale back in the early 80’s in Connecticut. For those of you unfamiliar with the term ‘yard sale,’ it’s the same as a ‘tag sale’ or a ‘garage sale’ depending on where you live. It is a low rent estate sale. Without the dead people and with crappier stuff, mostly.

The thing I bought (and I had NO idea or memory what it was called) was about the size of a small suitcase. It had a handle on top and the case was a sort of brushed aluminum. When you set it down and touched a button on the top, one side of it opened to a floorboard with what looked like a wah-wah or volume pedal in the middle and three or four mushroom cloud-looking foot buttons that would turn various effects on and off. When plugged in, it had SEVERAL cool clear switches that looked like clear light switches with a wild array of colors shining through the control panel.

It looked like something out of the original Star Trek series and it was 10 bucks and I bought it.

And for the next 7-8 years, whenever another guitar player came to my house or apartment, I would show him or her this ridiculous box (Named ‘the box’ by me) I had that made a series of astounding (and yet pretty unusable) noises all while shining various great colors in the dark.

One of my friends and mine’s favorite applications for this thing was to take a hit of acid, turn the lights out and play this thing as loud as possible through my mid 70’s Twin Reverb (sold, as I recall, for 100 bucks in gas money in the late 80’s…’arrrrghhhh!’ as Charlie Brown would say). We’d rotate…the unlucky people would play bass or drums…the lucky one in the rotation got to play the light-up suitcase with all the lights and weird noises. Ah, ‘the box.’

Then, I feel deep under the influence of Glen Branca and a guitar player named Glenn Phillips, best known as the guitar player for the obscure Hampton Grease Band. By the 80’s, however, he was deep into his solo career (he still plays…catch him if you can) as one of the oddest, most wonderful and interesting instrumental rock musicians. His album Razor Pocket is one of the truly great instrumental rock guitar albums. FIND IT, if you care about great guitar players. Someone at ‘Guitar Player’ in those days dubbed him ‘Mahavishnu Johnny Ramone’ which is actually kind of accurate. His has the chops and improvisational skills of a Jazz horn player, with the energy and velocity of a raging punk guitar player. A proto Nels Cline. He’s astounding. Find Razor Pocket or any of his other solo outings. He has the rare gift of writing catchy, melodic guitar instrumentals with monster chops and cool noises.

Anyway, I had fallen deeply under the spell of great guitar noisemakers. So, I started using ‘the box’ in a new band, at gigs, not just at acid parties at the apartment. During free form noise shows with my ‘art’ punk band of the time, I would use ‘the box’ and I now realized it had SEVERAL usable noises and settings. It had a VERY weird and thin sounding fuzz-type effect that would cause huge, annoying overtones and octaves and harmonic swirls when turned up (and we were nothing, if not VERY turned up, volume wise). We had another ‘guitar’ player who would tune all his strings to one note and repeatedly drop his guitar for his ‘solo’. It was a happening, man. ‘The box’ also had a sort of tremolo effect. A pulsing noise to add to the Fizzle effect. And then there was this odd filter/compression sound. When they were all on together, along with a Big Muff and the amps on 10…well, it sort of didn’t matter what you played note-wise, as the whole guitar was swallowed by these effects that would create this Niagara Falls of noise that just took your body over—it wasn’t really music, but it was astoundingly inside you when ‘the box’ really got going.

After that band was banned from most clubs in Boston, I moved, and ‘the box’ was retired as I played in more conventional bands. And all I know is, years later, I don’t have it. I may have given it away. I may have left it in an apartment when I moved. I may have sold it for a few bucks. But, by the time I was sober and had moved west, ‘the box’ was a thing of my past.

I really had nothing but fond memories for this weird effect until very recently, when I was reading Analog Man’s Guide to Vintage Effects. It’s a great book—one, along with Dave Hunter’s Guitar Effects Pedals: The Practical Handbook that any fan of effects should check out.

However there is one terrible thing about Analog Man’s book. One horrifying, crappy, sad, awful thing about the book.

What is this terrible thing about the Analog Man book?

It identified ‘the box’ for me. There were two pictures, so that I could point to it and tell my wife, ‘That’s IT. That’s THE BOX!’ While she nodded patiently at my insanity with what seemed to me to be not nearly enough interest. 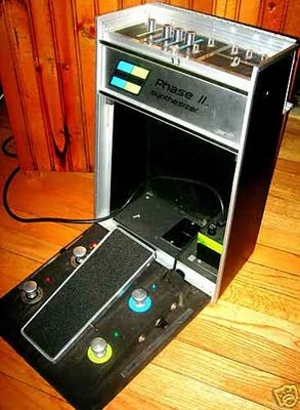 It turns out ‘the box’ was a Ludwig Phase II Synthesizer. The tremolo effect was called ‘Animation.’ The weird filter thing was called ‘Formant Trajectories.’ The fuzz was, well, fuzz. There are 4 sliders on the top, four mushroom cloud foot switches. A pedal for wah-esque effects. And seven light up switches on the top.

So, what’s so terrible about this news? Knowledge is good, no? Well, no, it turns out. Not this time, anyway.