It wasn’t even a tour…just a few dates in the Midwest over a long weekend. But it sounded like fun. Even a short time on the road is usually a good time, and we’d be playing with our buds from Chicago, the fabulous Mannequin Men, for all three dates. And it proved to be the great time it promised to be. If you want a cure for the blues, hot the road with the Mannequin Men for a few days. They remind me while I love rock and roll—seeing them on a good night reminds me of when I got to see the Replacements on a good one. A band that’s at once tight and loose, with great songs and killer hooks. What’s not to love? 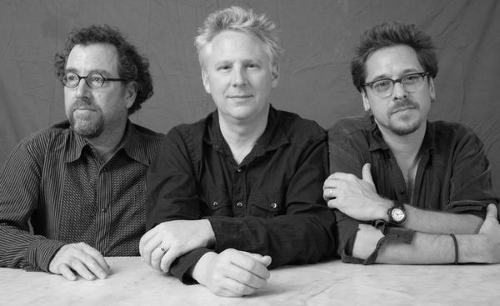 Plus, we’d second on the bills to Midwestern legends Killdozer, which sounded fun.

And a few days on the road with John and Kevin (the founding/original members of the Urinals) is always great. So, off we went.

I realized on this trip they don’t pay you for playing shows—they pay you for getting on planes and driving though seemingly endless fields of corn with billboards for Cheese and Fireworks. The shows are a blast—but you earn your money eating crappy road food and praying you’ll never see another stalk of corn.

So, it was up early Thursday and off to LAX. I’d brought my Tele (a new one as I can’t replace my ’69 of something happened to it on the road) and my Eastwood Airline Tuxedo, some pedals and cable. We’d be using a backline on the shows—i.e., other people’s amps and drums—so I just brought a good overdrive pedal, not knowing what kind of tubes I’d be pushing (none, it turns out).

We got to Chicago, got stuck in truly dreadful traffic and found the hotel. A 30 minute nap was followed by more hideous traffic—complete with tolls! In Chicago, not only is driving a slice of hell, but you pay cash for the privilege of sitting sucking diesel fumes and doing less than one mile an hour.

We finally get to the club and, despite being late, we get a sound check. My guitar sounds pretty terrible, as I’m using a new pedal and a borrowed amp (a Roland Jazz Chorus this night). My Tele’s too brittle and bright. I decide to use the dirt pedal I know better at the show.

Using borrowed amps is one of the things you get used to on the road. Normally, at home, I use, for various gigs: a little Lafayette duel EL84 (for small gigs with the other band), a late 50’s Magnatone 260 (modified for more gain and volume), or a Mack Skyraider (for louder Urinal gigs). In the studio, I’m spoiled with a bunch of lower wattage vintage Valcos and such. So, I’m kinda spoiled amp-wise.

But, out of town, you come to realize that most of the crowd couldn’t give a rat’s ass about your tone. They’re out for a fun night with good songs played well. They don’t really, hard as it is for a guitar geek to admit, know the difference between a Tweed Deluxe and a Line 6. And, while you might more readily play better with an amp you love, part of being a pro is not letting that kind of thinking affect your playing. That positive mindset is hard to keep when you end up playing, as I did once, through a 70’s Peavey PA head that a club thought was just fine for guitar.

So, the Chicago show goes well, the Abbey is a great place with great sound, and the show goes off without a hitch—I don’t even break a string. Kev, from the MM, joins us for a spirited “I’m a Bug.”

A hot woman thanks John for playing “Strip Club” (Kevin and I look at each other like, “we were there too” but she’s only talking to John. Some other woman at the merch table tells John he has the “Sexiest voice in rock and roll.” She’s cute, too. I get a bunch of geeky guitar guys asking about my guitars and my elbow. No fair.

Day two consists of much driving though Illinois and Wisconsin. We stop for photos under an enormous metal cow and a giant “CHEESE” sign. At every road stop are billboards for cheese and fireworks. On seemingly every mile of travel is…corn…corn…more corn. It’s a good thing that John and Kevin (the other Urinals) are two of the funniest, easiest tempered guys in the world.

Much kidding John about the Sexiest Voice in Rock and Roll.

Before the show, we hit what’s purported to be a great St. Vincent DePaul (recommended by the guys in Killdozer, who know the town well). Men from Killdozer don’t lie—this is a great vintage shop. I get some cool vintage plaid pants and some odd bean that I wear onstage that night. Michael, the bass player from Killdozer, tells me about a Goodwill in town that is organized by color. All the green clothes, men’s or women’s, in one section, all the orange in another and so on.

Night two, in Madison, at the High Noon Saloon, is a blast. The owner, Kathy (Cathy?) is super cool, the green room is comfortable and clean, and each band has a huge cooler of beer and water. Stylin’

Show goes pretty well. Pop a string on my Tele on the fourth or fifth song. The Tuxedo sounds fatter, anyway. The amp the 2nd night is a Silverface Twin Reverb….a fine amp, but not one you can get into distortion without peeling the faces of the first twenty feet of the audience. So, once again, most of my distortion comes from a pedal.

I go out to have a smoke after our set in Madison, still wearing the beanie from St. Vincent DePaul and some guy says, “Nice hat, faggot.”

Later, at merch table, a guy says, “You sounded pretty good for a hippy.” (Kev from Mannequin Men offers to punch him for me. It’s good to have passionate friends, but I tell him not to punch the guy. “Say the world, and I’ll go Miagi on his ass.”).

I wonder what I did to Madison to get this treatment from strangers. Also, why hippie? I don’t mind being called a faggot, but hippie is another matter. Hippies are annoying. I have no hair. The guys in the band start calling me “the faggot hippy”.

Later, a woman wants the band’s autographs, but the last CD doesn’t have me on it, so I don’t want to sign. But it’s too hard to explain, so I had to sign Rod Barker’s name on a CD for a drunk woman who wanted autographs on WHAT IS REAL AND WHAT IS NOT.

At the merch table, a woman comes on to John. I get called more names. A woman says, “I NEVER thought I’d like a band called the Urinals.”

Before the last night, we have dinner with the Mannequin Men and some of their cool pals. That puts our group at nine or ten for dinner. We try to go for Ethiopian food, but the place is packed, so we settle for pizza—a road staple we were hoping to mix up a bit, but no such luck. We make plans to do a cover single with the MM, where we cover one of theirs and they cover one of ours on a 45 (remember them? They’re back!). There’s talk of past tours and future tours and the general good-feeling of hanging with pals on the road.

The last night, at the Turf Club, I’d planned on using Ethan’s (from MM) Twin again, but the guys in Killdozer blew one of its speakers the night before. So I end up with the sound guy’s Fender Deville, which he tells me is a “great amp”. I’m not so sure that’s true, but it’s his and I don’t say anything, and it sounds fine…it gets loud and has a good clean channel (which sort of defeats the whole idea behind a tube amp, but whatever), so I can crank the clean and get, once again, dirt from the floor.

We have, maybe, our best show in St. Paul. Much fun. Miles and Kevin from MM join us on “I’m a Bug”. We close with a very fast version of 13th Floor Elevator’s/Roky Erickson’s “You’re Gonna Miss Me.”

We hang out at the club. It’s 1AM. Killdozer is playing a pretty great, over the top cover of “I Am, I Said.” We have a flight back to California in 5 hours and I’m wondering if I should nap or stay up all night. A woman hits on John after announcing, “I’m not a stalker, but I needed to see you!” Clearly, a stalker. To add insult to injury, her boyfriend stands there while she just about pins John to the pool table. Interesting. No one hits on me. More questions about the eBow and my guitars (well, my guitars are kind of cool). Ah, well. Rock and Roll.