I don’t go to guitar shows much any more. I should, because I have a lot of friends who ply the floor, but I’ve been on a guitar diet for several years now. And my friends always find something goofy for me to buy. That’s how I ended up with this mysterious and rare Takamine solidbody guitar from 1984. What the heck is this?! I didn’t know and the dealer who knew enough to bring it to me didn’t know either, but he knew I would have to have it!

Well, I eventually found out some more, which I’ll be glad to share. To understand where this guitar comes from we have to go back to 1854 when Commodore Matthew Perry brought a fleet of warships to Japan and forced a treaty to open up its ports, and hence trade, to anyone other than the Portuguese, who’d had a monopoly on trade since the 1600s. This began the influx of Western cultural influences on the island kingdom. The guitar is said to have arrived in around 1890, at the time mandolin orchestras were popular. In 1901 Mr. Kempachi Hiruma returned from a stay in Italy bringing a guitar. Mr. Morishige Takei, a great player and composer, also studied in Italy in 1911 and returned to Japan in 1915 where he founded the Sinfonia Mandolini Orchestra in Tokyo, giving his first solo guitar concert in 1921. In 1929 Segovia toured Japan with great success and influence. Guitar importing soon followed, with manufacturing commencing in the 1930s.

Enter World War II. Pearl Harbor. Hiroshima. American occupation and reconstruction. Rebuilding amongst the ruins were guitar manufacturers, including those who made those new-fangled electric guitars and amps. It wasn’t long before Japanese manufacturers were exporting instruments throughout the east Asian region. By the end of the 1950s, the exporting was to the fast-growing American market, rapidly filling up with increasing numbers of Post-War Baby Boomers. Initially occupying the bottom of the market, their quality increased and by the late ‘60s Japanese guitars had effectively driven out European competition and put an end to many American mass-manufacturers (eg, Kay, National). By around 1969 product quality had progressed enough that established American manufacturers saw the possibilities of shifting production of budget lines eastward. 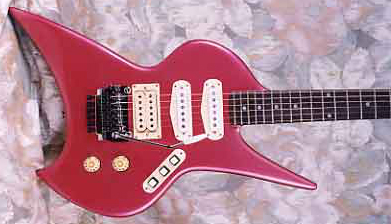 In 1969 the Martin company made overtures to the Takamine company—a premium maker of acoustic guitars—about producing some budget acoustics, but the deal fell through. However, the Kaman Corporation, owners of the Ovation brand, stepped in and inked an exclusive U.S. distribution deal with Takamine. Thus began a long and fruitful collaboration between Ovation and Takamine.

Which finally brings us back to this unusual Takamine guitar. Guitar-making, like any other aspect of a manufacturing economy, goes through cycles of demand and recession. In the early 1980s, demand for acoustic guitars was way down. Disco in the late ‘70s had challenged the whole guitar supremacy with a threat of keyboard domination. The guitar, thankfully, dodged that bullet with punk/New Wave and then the rise of Heavy Metal in the early ‘80s. That was good not only for electric guitars, but it was also good for weird-shaped guitars. The Metallers liked guitars like Explorers and Flying Vees and even more exotic shapes.

Alas, Heavy Metallers didn’t really dig acoustic guitars too much. Takamine suffered a dramatic drop in sales. Their American partners, Ovation, decided to help and suggested they try their hand at making weird-shaped solidbody electrics for the Metal market in order to avoid having to lay off workers. This strange beast was one of those experimental guitars produced by Takamine in 1984.

So, how did they do? Well, pretty good, actually. This model—name unknown—had all the latest jimcracks. It had a neck-through-body design and the just becoming de rigueur humbucker/single/single pickup layout. It also had a proprietary double locking vibrato system with a lock-down function turning it into a stoptail (probably borrowed from Yamaha). Pickups were controlled by a unique on/off pushbutton system, simple but effective if you like such designs. The metallic mauve finish wasn’t half bad either!

Indeed, this is a pretty darned good guitar. The pickups are sufficiently hot, the vibrato works fine, and the controls, while basic, are really all you need. If there’s a criticism, it’s that the neck has the typical Takamine rounded acoustic profile, not the usual thinner, flatter shape usually found on electric guitars of this era. Then again, if you like an acoustic feel, that might be a positive!

How long these were produced is unknown (probably about one run), as is how many were produced, but this is the only one I’ve ever laid eyes on. There’s no serial number. It’s probably as rare as the proverbial hen’s teeth. I love it, but it’s just another of those reasons why you haven’t seen me much at guitar shows of late!