Like a tornado ripping through town, the 2007 NAMM show came and went. For Eastwood Guitars, it was our first – and what an eye-opening experience it was. Although exhibiting in the 4-day event cost as much as buying a first home in Winnipeg, in hindsight, it was worth every penny. What a trip! Here are some observations from the helm of Eastwood. 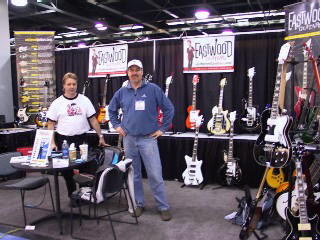 Peter McCracken and me after the booth setup

Dumb Luck Wins in the End – for our first 5 years we decided not to exibit in the NAMM show. Most companies would think this was a mistake – a new product, a new audience – damn, you have to get out there and tell the world!! But for five years we stayed at home and just serviced our customers on-line. In hindsight, (dumb luck) I think we were right to do so. By the time we hit the NAMM show last week, we had an army of friends and followers that were beating down the door to meet and greet us! It was a genuine Eastwood love-in. It was one of the greatest experiences of my life to finally meet face-to-face with so many customers that have supported us through the first few years.

We were espeically happy to expand the dealer network in USA and Europe with some of my favorite guitar stores picking up the Eastwood line. Although the list is too long, some of those new dealers include Rudy’s in New York City, True Tone in Santa Monica and McKenzie River Music in Oregon. Check the Eastwood Website for a full listing of new dealers in the next two weeks. Thanks to all the new dealers for joining us, and we look forward to a fun and profitable 2007!

I was fortunate to enlist the help of some friends and customers at NAMM to work the booth with us, we all had a blast! Thanks again to Pete McCracken, Don Mackrill, Phil Meyrick, Rob Roberge and my brother Peter for his on-booth Surf Cinema entertainment.

Who has more fun than Eastwood?

Peter Robinson from Surf Cinema entertains on the MAP guitar: 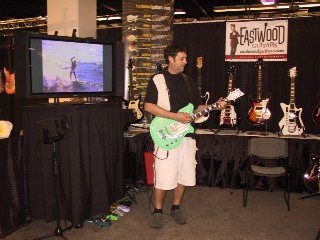 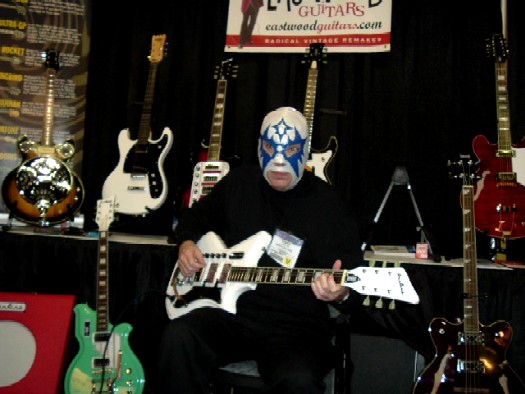 Not sure who this guy is, but he dropped by the booth and posed for some pictures with our new AIRLINE MAP BASS prototype: 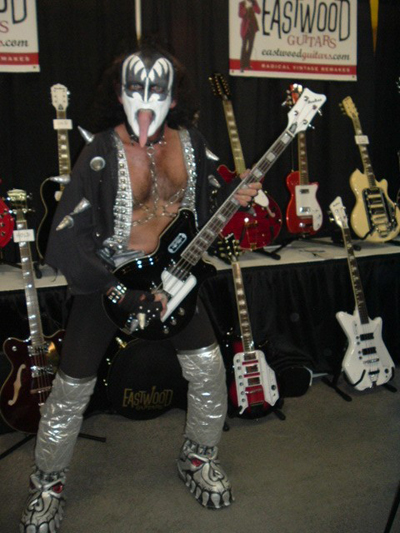 This is a 30″ scale model that will be available in April.

Before heading home we did the Hollywood tourist trek. Here I am having a quick snooze beside Clint EASTWOOD mark: 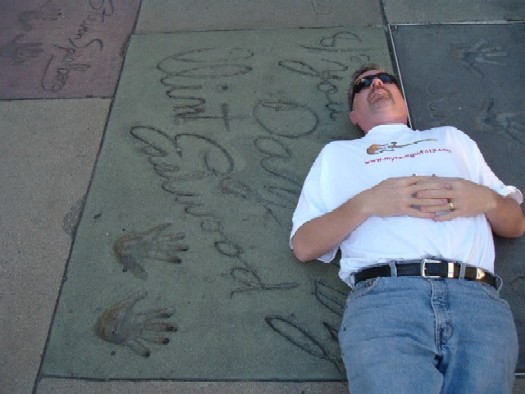 Hollywood tourist trek: Here I am having a quick snooze beside Clint EASTWOOD mark