I have been recording since 1980, mostly in home studios. And just for the record I will give you an idea of what was in my first few home studios, it was no digital 8 track the size of a paperback novel.

My first home recording set up was an Akai ¼ inch 2 track and a Harmon Kardon cassette deck, no EQ, the only effects I had were a few effects pedals. I would program one of my primitive drum machines or use a factory preset non-programmable rhythm machine while I was recording that I would usually add my bass or rhythm guitar. And after a suitable take I would ping pong the tracks back and forth from the 2 track to the cassette, adding effects on the fly.

My next home recording rig was a Teac 3340 4 track with a Biamp 6 channel board with internal spring reverb and a stereo 10 band graphic equalizer. Boy that was the real deal.

BTW please send me some of your first home recording Frankenstein laboratory creations, I would love to hear them.

#1: Use chord fragments instead of whole chords

Like a good B-3 player who uses two or three fingers, your chords and their voicings should be well thought out and economical. Try not to use roots or fifths unless the fifth is an altered fifth like a flat 5 or augmented 5th. Analyze the melody notes and try not to crowd them with notes that proximate in the same octave i.e. if your melody note is a root middle C and you want to use the 9th in the chord use one either an octave higher or lower..

The whole idea here is to give room for the other instruments or just to open up the music and let the notes you leave out be implied as opposed to being heard, it’s an interesting concept check it out!

This is a very useful technique when you want to change the texture of your bass track, without changing the integrity of the original. First you will need to clone the track, once you have done that clone it a second time. Now you should have three tracks, eq the first clone track very bassy and cut all the highs. Now do the opposite to the second clone track, eq it high and cut the lows. Now instead of changing the original track you can just add the clones to your taste.

A few pointers on this technique, first I think you should electronically clone the tracks and not shadow them by recording another bass track (that is an entire different idea). Now when eq-ing your clones try to do it while playing it alongside your original track, that will give you a better picture of where to go with the eq.

#3: Have a guitar strung up to Nashville tuning.

Nashville tuning for those not familiar with it is a six string guitar tuned with standard first three strings and the next three tuned up an octave. It’s like a twelve string without the low strings, pretty cool idea. They call it Nashville tuning because that’s where it started in the studios in Nashville. You can’t play lead with it, or accompany with it alone, but where it comes into play is adding it to a track where you want to add a highlight to your track. A twelve string will sound a bit muddy in comparison. Try some alternative voicings, and work it in and out of the mix.

Prepare yourself to adjust the truss rod as this tuning puts almost no tension on the neck.

#4: Use stereo delays to fatten up rhythm guitar parts.

This is a method I have used for years, I especially like using the stereo delays on funky or single note rhythm parts. I will usually use a delay of 75ms to 150ms, panned hard left or right. The dry guitar panned one way the wet guitar panned the other way. This effect also works well on ½ note and ¼ note parts, like reggae-type feels.

You can also open up the delays for melody parts. What I like to do is set my time delays immediately when I record. I do this by counting the beats per minute and setting the delays accordingly. So if yourBPM’s are 105 I would set my delays at 210ms, 420ms and 840ms and use and combine them to taste.

One suggestion is to get a feel for it when you bring up your tracks, but I really start to get creative when it comes to the mix. Make it sound big, and don’t be afraid to get buck wild!

#5: Bass players use those flatwounds dammit!!!

Yes Mr. Bassman start recording with flatwounds and hear the magic. Don’t forget that drums record better when they are muffled (ask Ringo) and don’t decay, well boys sorry to tell you that unless you are playing Stanley Clarke style fusion your bass should not be sustaining all over the place. All it does is make the track feel real loose. Studio bass legend Joe Osborne recorded hundreds of sessions in the 60’s with the same set of “dead” strings for over four years! And when he did change them, he had to fish the dead ones out of the trash.

All your favorite James Jameson / Jerry Jemmot records of the 60’s were also recorded with flatwounds. Just try it!

#6: Always record a direct sound on a separate track

Whether you are recording through a POD or miking up your favorite amp, having the track recorded along side direct will always be a plus. You may never use it or just bleed it in, but you will feel better just knowing its there. The other plus is you can always “reamp” it by feeding the dry track through any device or by using a device such as a Reamp which allows you to run a recorded track back through an amp after the fact.

That’s the first part of this column – and remember, that you do not need a 24 track studio to create great music, you need go concise ideas and tons of overdubs and other filler. Reminder, Sgt Pepper recorded on a four track, Blizzard of Oz, 8 track, Uncle Meat a 3 track, all the early Motown hits two 2 tracks in sync, Dark Side of the Moon, 8 track – ..see a pattern developing?…..Part 2 next month.

P.S. Mike Robinson and I have been working on some custom designs – the first is the Joey Leone Signature Model – for the past 18 months. We are getting close to the release date and will have some information available in the next newsletter. In the meantime, drop me an EMAIL and I can fill you in on some preliminary information. Here are some sneak peaks at the prototype. 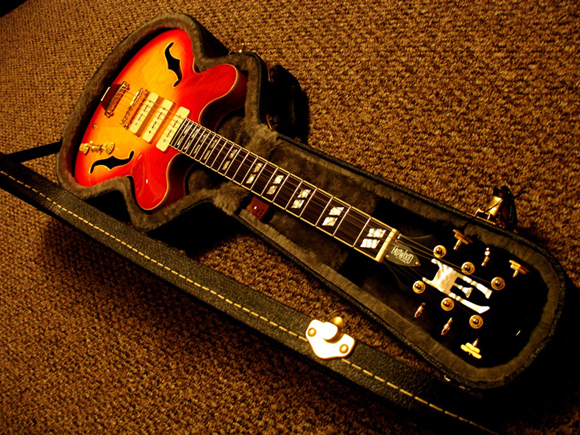 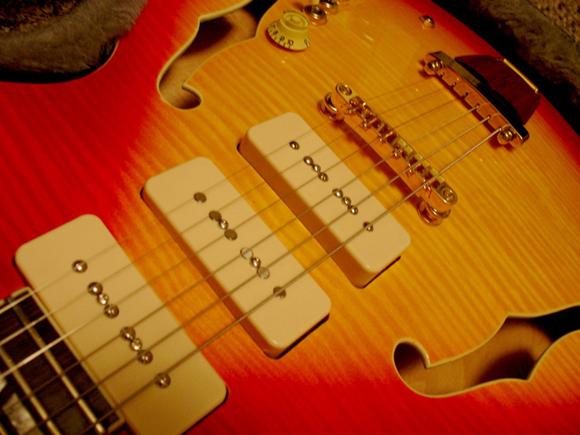