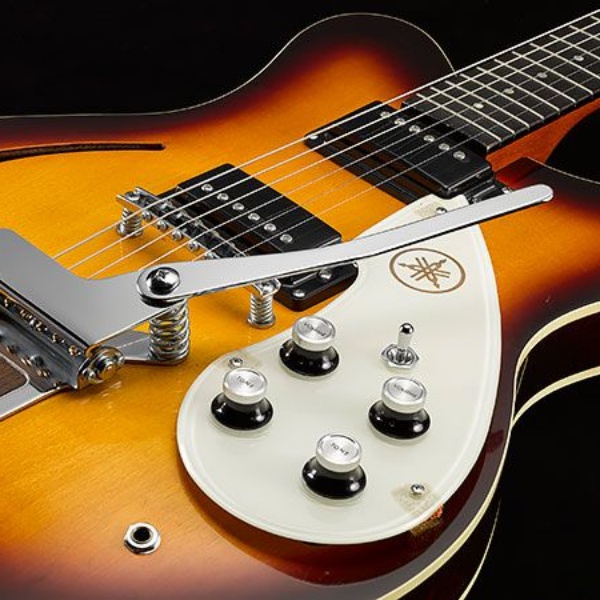 Guest blogger Michael Wright tells us more about this rare 1968 semi-acoustic model by Yamaha. Exquisite, and quite special for sure, and the inspiration for the new Eastwood Custom Shop SA-15.

My first guitar was one of those legendary acoustics with 3/4″ action, outfitted with heavy gauge (one gauge only) Black Diamond strings.  I was seven.  My teacher, an authoritarian Austrian gentleman, insisted I practice 1 hour a night.  I did.  I cried.  My fingers bled.  I was so happy, somewhat later, when someone ordered a Gibson ES-225, returned it to the store, and it became mine, outfitted with flatwound strings, of course, and a factory Bigsby.  So, it might surprise you to learn that I hated that guitar.  I hated those P-90 pickups.  I hated the ugly sunburst.  I was so glad when the neck twisted and I got rid of it.  So, it might not surprise you to learn that I’m not fond of thinlines.  Even when they’re as cool as the Yamaha SA-15.

It’s no wonder Yamaha produced some cool guitars.  Yamaha may be Japan’s oldest manufacturer of Western-style musical instruments.  In 1887, Torakusu Yamaha developed a reed organ in Hamamatsu, Japan, starting a factory the following year. In around 1900 Yamaha began making pianos and those were the primary musical instruments the company would be known for thereafter, although Yamaha would later branch out into electronic organs and wind instruments (not to mention motorcycles, vacation resorts, lifestyle products, and semiconductors!).

It appears that Yamaha began selling Yamaha acoustic guitars in around 1946, but there’s some buzz out there that those might have actually been re-branded Suzuki products.  Yamaha developed the “Dynamic Guitar” probably during the 1950s.  These were similar to a Harmony “Convertible” guitar I once got from Montgomery Ward as a kid, meant to be strung either nylon or steel.  Yamaha Dynamics are way better than most other acoustic guitars made in Japan at the time.

In 1960 Yamaha established Yamaha International Corporation in Los Angeles, creating probably the first American beach-head for a Japanese musical instrument company.  This was still primarily for selling pianos, but it would include guitars once Yamaha decided to export those.

1966 seems to have been the seminal year for guitar-making.  That year they brought the Spanish luthier Eduardo Ferrer to redesign their classical guitars.  Yamaha also introduced its FG line of steel-string guitars.  And its first solidbody electric guitars, the SG-2 and SG-3.  I’ve always suspected that the SG-1 was earlier, but that’s not the party line.  Oh, and their first amplifiers.

I’m not sure that Yamaha exported its earliest electric guitars, at least, to the U.S.  Acoustics may have preceded electrics.  I don’t recall seeing any Yamaha electrics during the 1960s, but then I was living out in “fly-over country” back then.  I have a Yamaha catalog that was sold as being from 1966, but the code on the back is “692” and the Japanese, being a generally meticulous race, often coded their periodicals and that would make it a 1969 catalog.  The electric guitars feature in it are all “semi-acoustics” and, since those were not introduced until 1968, that reinforces the later date.

While Yamaha’s acoustic guitars were pretty conventional, these electric guitars show Yamaha’s penchant for distinctive design.  The equal-cutaway models are not just Gibson clones, but have classy squared-off cutaway horns.  And the asymmetrical 15s…well, I think these are splendid!

The extended lower horn of these guitars reflects a particularly Japanese obsession with everything Ventures.  The Ventures toured Japan early in their careers and Japanese fans loved them.  When Flower Power eclipsed the Ventures’ Surf sound, they were able to keep their careers alive on the strength of their fans in Japan.  This meant, of course, a love of the Mosrite Ventures guitars, which was, after all, just a Fender Stratocaster flipped over!

The SA-15 was a little more conservative take on Yamaha’s iconic ‘60s solidbody, the SG-7, itself inspired by the Mosrite.  The SA-15 and SA-15D mainly differed only in trim.  The SA-15 seen here was the plainer, with an unbound rosewood fingerboard and dot inlays.  The SA-15D had a bound fingerboard with top-edge-inlaid markers (a la Gretsch) and special checkerboard top binding.  The pickups were “noise-free high-sensitivity type”…with “high-performance anisotropic ferrite magnet and pole-piece,” with two volumes and two tones on a threeway switch.  Basic.  Decent.  Great for playing “Walk, Don’t Run!”

I was glad to see my old Gibson ES-225 leave for someone else.  And I’m still not wild about thinline semi-acoustic guitars.  But if I was a fan, I’d sure prefer to go on stage sporting a Yamaha SA-15 for a couple bars of “Telestar.” 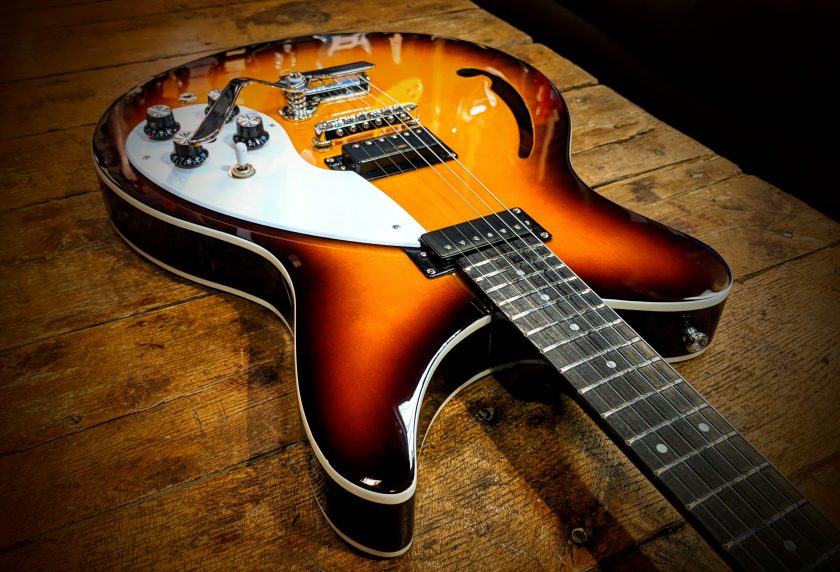 The new Eastwood Custom Shop SA-15 is a fantastic tribute to the legendary Yamaha SA-15. If you’re not lucky enough to own one of the originals, this new guitar really does a great job a recreating the Yamaha…