Possibly no other single event inspired the creation of more garage bands than the first Ed Sullivan show featuring the Beatles. And likewise, probably no single company furnished more of the guitars and amps for young musicians than the Sears & Roebuck Company. While most of us would rather have started out with the Gretsch, Rickenbacker, Hofner, Vox and Ludwig gear we saw the Fab Four using, due to price and availability, it was the Sears catalog that supplied our first six-string. 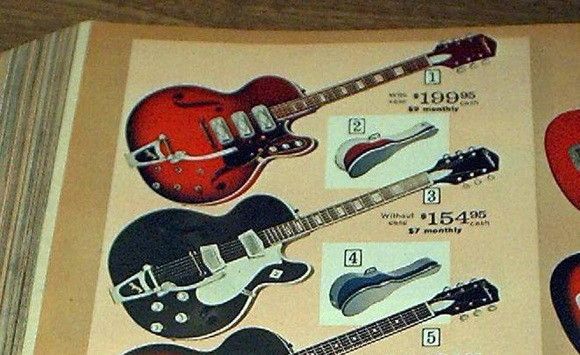 Sears began selling a selection of electric guitars and amps in the fifties, but it is the 1960s that the company sold most of its more popular models. Silvertone was the house name used by Sears for their instruments but these were actually made for Sears by several manufactures including Danelectro, Harmony and Kay. Of course, Sears had their low end and their high end instruments but for the most part they sold some really great guitars and amps at comparatively budget prices. A Fender Strat in 1964 cost $275 compared to the most expensive Silvertone guitar of that time at $199 including case. Putting things in perspective with inflation though, even a guitar costing $100 in the mid 60s would run you a bit over $600 today.

We were all very happy to have our first guitar but play in a band with a Silvertone wasn’t always considered “cool” and most of us got rid of our Sears gear in favor of something else has soon has we had enough money. And, most of us now really regret doing so. In the last several years Silvertones have enjoyed a boom in popularity among both collectors and performers. There are whole web communities devoted to Silvertone instruments. And, as it goes, availability for these instruments is declining while prices for them are escalating.

Opening the pages that feature guitars and amps from a Sears 1963 Fall & Winter catalog reveal a virtual vintage wonderland. The top of the page shows the two infamous Danelectro made guitars with “Amp-In-Case” models 1448 (single pickup) and 1449 (double pickup). These Mosrite shaped guitars had the chambered bodies, lipstick pickups, stacked tone & volume controls and were constructed of masonite. The tube powered amps built into the case were 3 and 5 watts with 5 inch and 8 inch speakers respectively. The larger amp even had tremolo and both shipped with a “How To Play” 45 rpm record. These sold for $67.95 and $99.95 in 1963. Today, a single pickup model in rough but working condition can run around $300. The double pickup model if near mint can cost well over a grand.

Several other guitars are below the Danelectro models including the popular Harmony made “Jupiter” model #1423 at $79.95 and the two Harmony “Rocket” like semi hollowbody models. The double pickup model # 1446 with black finish sold for $149.95 and the Silvertone flagship model # 1454 in red sunburst sold for $189.95 including case and featured 3 DeArmond pickups with separate on/off toggles for each. Both of these models were also equipped with a genuine Bigsby vibrato. One of the 1454 models in good condition recently sold on EBAY for over $800, still a good buy!

We all know that regardless of how much you spend on a new guitar, it is not going to sound quite like a 40 year old instrument. If you want a good vintage guitar and don’t want to take out a second mortgage to get one, Silvertones are a good choice. Collectors looking for s Silvertone in near mint condition should be ready to get deep into their pockets. However, if you are actually looking for a guitar to play and/or record with and you are not to concerned with cosmetic issues, about $200 will land you any number of nice Silvertone models. Just keep an eye on the late night auctions and frequently check out the pawn shops and garage sales. If you are a serious musician you should plan on possible replacing the tuning gears and maybe the bridge as these usually were sub-standard on even the most expensive models. If you going to gig with your vintage Silvertone, at least buy a descent case. The stock cases for Silvertone were made of chipboard. If you are one of us that owned a Silvertone and sold or gave it away just remember the words of Joni Mitchell, “Don’t it always seem to go that you don’t know what you got till its gone”.

25 thoughts on “In Praise of Sears Silvertone Guitars”