I never really warmed up to headless guitars.  Oh, they were really cool looking and there’s no denying Andy Summers had real style playing a Steinberger for The Police.  But I guess I’m old fashioned.  I need a head to keep me oriented.  Still, present me with something made out of airplane material like this Modulus Graphite Flight 6 Monocoque, and I’m interested, even with no head. 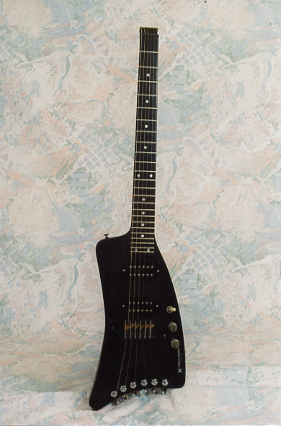 Turns out this guitar is a study in contradictions.  I actually interviewed the man responsible for designing and producing this guitar—I’m pretty sure it was Modulus Graphite founder Geoff Gould, but it was so long ago, I forget.  Modulus Graphite was, as I’m sure you know, basically known for making hollow carbon fiber necks for basses and, occasionally, guitars.  Gould, who worked as an engineer in California’s aerospace industry, got the brainstorm that he could build a stronger, more uniform and more stable by using the tough and strong carbon graphite, which was employed in making lightweight but highly stress resistant components for aircraft.  This was around 1977-78.

Of course, Kaman/Ovation had already had that idea a decade earlier, but for guitar bodies (and tops), not for necks.  And, about the same time Gould was working out his neck ideas, Ned Steinberger was developing his headless, graphite basses and guitars in New York.

Gould’s idea was pretty good and well-received by bassists.  The company had a good long run, only closing down in 2013.  Modulus Graphite’s heart was primarily set on basses, but they did make a number of guitar lines, including the Genesis series and some interesting Blackknife models.  These guitars all had heads.  As near as I can tell, Modulus Graphite’s guitars were never as popular as their basses.  But then, bassists have historically been much more receptive to innovative technology than guitarists, who tend to be stuck in the wooden mud, as it were. 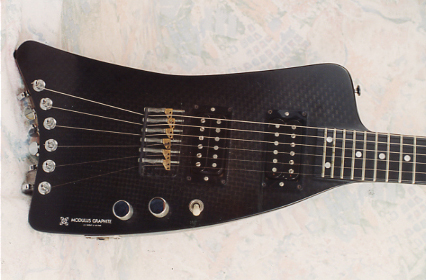 Probably partially inspired by Steinberger’s creations, Modulus Graphite decided to try its hand at a graphite headless guitar.  This effort resulted in 1983 in the experimental Flight 6 Monocoque guitars.  The Flight 6 name is obvious because the carbon graphite that makes up the entire guitar is aircraft material (“flight”) and it’s a 6-string guitar!  Duh.  Monocoque is a term used primarily in the aerospace industry basically meaning surface bearing structure.  In other words, the object’s “skin” provides the structural strength, like an egg.  There is no “frame” or internal structural support.

Basically this is a self-enclosed “tube” of molded carbon graphite.  I don’t really know how they made this thing, but the neck and body are all one and hollow.  There’s a brass plate at the end of the neck, to hold the strings and no doubt to provide access for wiring this puppy.  According to Gould, since this was a “high-tech” guitar, and so as to not take away from the novelty of the guitar design itself, Modulus Graphite equipped the Flight 6 Monocoque with basic guitar electronics.  The pickups are standard Seymour Duncans, a Custom at the bridge and a Jazz at the neck, with a threeway select and simple volume and tone controls.  The tuners are Gotohs. 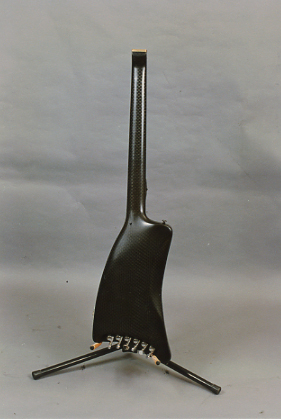 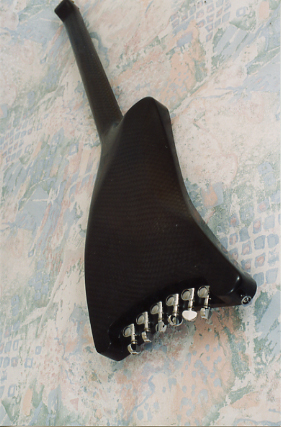 If it was me I’d have tricked this out like a B.C. Rich, with as much tricky electronics and I could squeeze into this melted Steinberger.  How about a phase switch and coil taps?  And a preamp circuit?  I’m fine with the simple volume and tone, though.  I never could get into fiddling with micro-adjusting each individual pickup’s tone, but that’s just me.  Oh well.  Everything is, after all, a matter of taste.  But this doesn’t mean that any of this makes this guitar inadequate in any way.

This guitar really is a work of art, questions about electronics preferences aside.  It is really comfortable and, assuming you’re going to pump it through some effects, gets the job done.  Gould told me approximately how many of these were made, and it wasn’t many.  I forget the figure after all these years, but it was in the neighborhood of 20 or so.  Enough to qualify as pretty rare.

As I said, most guitar players would rather play a Les Paul or a Strat than a headless carbon graphite monocoque thingy.  Tastes for headless guitars and other oddities come and go.  One thing to consider, though. It’s been more than 30 years since the Modulus Graphite Flight 6 Monocoque guitar appeared.  It’s ultra-light.  Don’t know about you but 30 years on from my prime, I appreciate anything that’s lighter rather than heavier to schlepp around these days.  Prepare for take-off!

One thought on “Seat-backs straight. Prepare for Take-off.”