Now that they have finally released the remastered Beatles albums, it seems a good time to reopen the classic argument. The Beatles – the best group of all time or just a matter of timing? Fab or Fad? We can work it out… 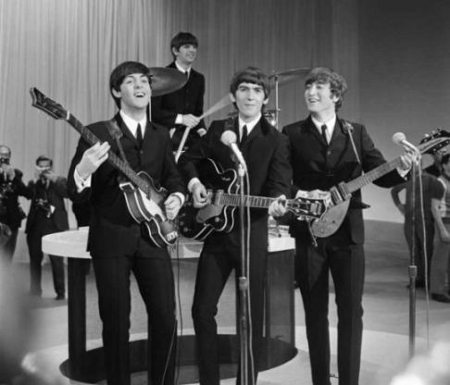 The Beatles on the Ed Sullivan Show

Since 09/09/09 I’ve been listening to the fab four round the clock until I couldn’t bear it any more, with mixed emotions (to quote Mick Jagger). As a whole there are a lot of good songs, several great songs and then quite a bit of rubbish some of it downright embarrising, and I’m not just talking about Revolution 9.

All The Beatles albums… rated!

Let’s start from the very beginning (a very good place…but enough of the kitch, I’ll leave that for Paul.)

Please Please Me: definitely one of their purer efforts, pure rock and roll, simple lyrics, but that was what was expected of them then. A good start and still good today.Of the fourteen tracks six were covers of other artists including songs written by Carol King and Burt Bacharach. Now remastered the harmonies and simple music renditions make it feel even more alive. Grade: A-

With the Beatles: released only four months later. Another great raw album. You don’t change a winning combination. Finally Ringo gets to play drums – not the best drummer in the world by far. Again six of the fourteen tracks are covers. Grade: A-

A Hard Day’s Night: down to 13 tracks, this album was entirely self written. Another strong production Grade: A-

Beatles for Sale: the Beatles are by now tired and pressed for time and a bit fed up – thus the title. Between a concert tour in the U.S. and one in the U.K. they had all of five weeks to put together and record this album. Luckily they could lean heavily on successful covers they sang on stage in their Hamburg days. Much due to this fact, the album is almost flawless and great fun to listen to, especially after being remastered. It has a very live, gritty feeling to it, something that was actually missing from their actual concerts (see my blog ). Grade: A-

Help!: The soundtrack from their second film. Who could dare fault an album including Yesterday, Ticket to Ride and and the beautiful You’ve got to Hide your Love away. Grade: A

Up till this point definitely a great group. Not a rock group or a revolutionary force but still great enough to be worthy of all the hype.

Rubber Soul: the first hint that the Beatles wanted a change. There is a candid attempt to add hidden meaning to the songs. Here the Beatles try to go beyond the boy / girl love / dove lyrics and attempt to make a statement. Hints at drug use are abundant as is the influence of Dylan and the Byrds. Ambiguity is the name of the game; Norwegian Wood, Drive my Car, Looking Through You. Though it has it’s great moments, the album is uneven. There are initial signs of the banal McCartney love songs to emerge in future years – Michelle Ma Belle!!!. Gone are the rhythmic, exciting numbers that got all the girls screaming – the Beatles concert years are behind them. Grade: B

Revolver: Electric Rock has replaced the folk rock of the previous album and once again the vitality is back: Got to get You into my Life, Taxman, And your bird can Sing. Several songs, notably Tomorrow Never Knows, offer a shift to the East with the use of the sitar. At the time many critics hailed Revolver as one of the greatest albums of all time. In retrospect their praise seems overrated. The songs are strong but the mixture of different styles make it more a unconnected collection of songs than a concept album. Grade: B

Sgt. Pepper’s Lonely Hearts Club Band: Often voted the best and most revolutionary album of the twentieth century, the real question is does it hold up to the test of time. In my opinion no. Marketed as a concept album it falls flat after the second song and leaves us with a batch of psychedelically touched pieces that are unlikely to get you excited today. On the one hand there’s With a little help from my friends (Joe Cocker’s half stoned version sounds far superior), A day in the Life (actually two songs knitted together) and When I’m 64 but how many times are you willing today to listen to Getting Better,McCartney’s Lovely Rita (Wings are on the way) or Mr Kite (more of a joke than a song really). A great album cover but not my favourite album or even my favourite Beatles album by far. Grade: B-

Magical Mystery Tour: not really worth mentioning. A failing BBC TV special with no script, turned into a disastrous EP set and then reshuffled to make an album. Eleven songs in all, luckily including Fool on the Hill, Strawberry Fields and Penny Lane, otherwise worthless. Can you really listen to All you need is Love or Flying without throwing up? Grade: C-

The White Double Album: The Beatles didn’t even bother themselves with a name or cover. Not really a group album at all. This album has enough good songs to fill a short, single album but it as a double album it is full of garbage. High marks for Back in the USSR, Dear Prudence and While my Guitar Gently Weeps, but new lows for Revolution 9, Why don’t We do it in the Road and Happiness is a Warm Gun, not to mention Paul’s idiotic Rocky Raccoon, and Mother Natures Son. Even George and Ringo got in the act with Piggies and Goodnight. Did they really believe they they could sell anything? A real embarrassment. Grade: C- (and I’m being nice)

Yellow Submarine: don’t even get me started. Just let me give them an E and leave it at that.

Abbey Road: After three previous no shows, no one really saw this coming. True it’s as much a George Martin album as a Beatles one, but finally it all comes together. My favourite Beatles album by far. The Beatles finally get it together again. A masterpiece Grade: A+

Let it Be: I wish they had. The title song is more gospel than Beatles. Then there’s The Long and Winding Road – George Martin and Paul really went overboard there. Apart from Get Back and The One after 909, which returned them to their rock and roll era, the album isn’t worth mentioning. Grade: D-

So there you have it. Six great albums, three not so great and four pretty awful ones. So were they really that great. As a rock and roll group they could even get your grandmother up and dancing. As rock psychedelic revolutionists they were out of their league.

37 thoughts on “The Beatles: Were They Really That Good?”