I wasn’t in the market for any more amps, but how could I pass up this Lafayette LA-75? A buddy of mine (thanks Rob S.!) sent me an email, letting me know that this baby was on eBay for a really good price and that I should snatch it up. “If you love the (Valco-made) Harmony 415,” he said, knowing it was one of my favorites, “you’ll love this one. Similar output and tone, only out of one 12” instead of two.” And he was right—and then some. I do love the duel EL84 Valco/Harmony 415, but I think I like this little sleeper even more. 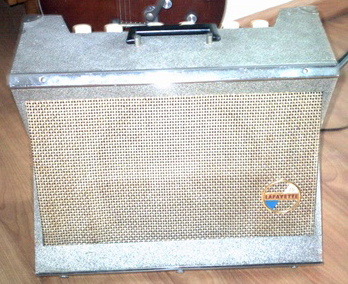 What’s to love? First of all, its Jetson-era Mid Century Modern styling that makes it pretty as a piece of vintage furniture. It’s a classy looking little box—the only American made amp it resembles is the nearly-equally cool looking Dano-made Silvertone 1432 (itself a bit of a sleeper, as it was a predecessor to the classic and easier to find 1472 and 1482 series). But while the 1432 relies on the classic duel 6V6 setup for its bluesy grind, the Lafayette runs two 7189s for output.

What’s the difference? Not much, actually in the tone of the amp. The design of an amp has at least as much to do with its tonal makeup as does its output tubes, and this little Japanese combo sounds much like Danelectro’s and the Chicago beasts of its era (Valco, Lectrolab and so on). It’s got the familiar thick, dark, lush tone at under 4 on the volume knob, and it has an impressive and small gig volume when it starts to get into its grind around 5 and up on the volume knob. And it has two channels, which you can jump to enrich both the chewy grind and the thickness of the amp. 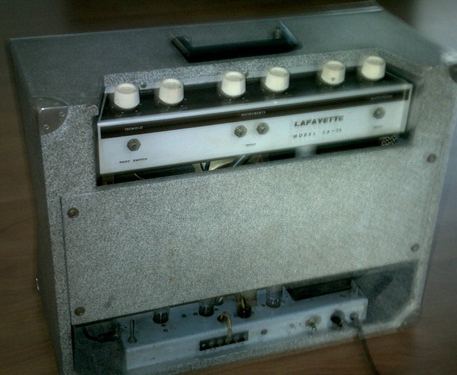 Mine seems to have the original ALNICO speaker (Japanese amps don’t always share our speaker codes, so it’s hard to say what make it is) that sounds very much like a Jensen ALNICO I have in a 1958 Ampeg Mercury (I switched them and the tones are nearly identical).

What makes this amp unique among some of the great Japanese made amps of the same era? Its tone is actually very Valco. Dark, chewy, biting and fat, fat, fat. While some of the Guyatone’s and Univox’s have a tone all their own (which, no doubt, is very cool), the Lafayette 75 really has that great thick grind that the Chicago (and New Jersey, in Dano’s case) amps had that is perfect for jump blues and, when pushed, unhinged overdrive into Neil Young territory. 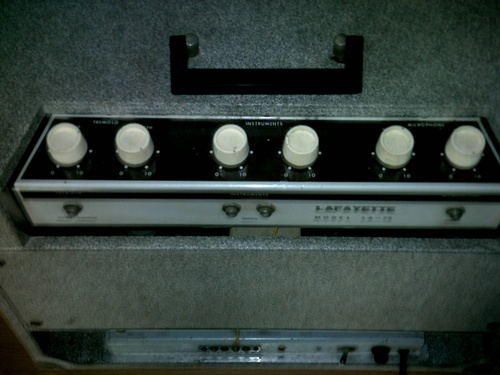 And now that Valco’s have become increasingly expensive (though still worth it in many cases), it’s put the amp lover on a budget hunting for other great amps that are still super affordable. Brands like Premier (in some cases), Hilgen, Univox, Guyatone, Alamo, Lectrolab and some Danelectro’s can still be found in nice shape in the $300 range. For hand-made point-to-point (or hand stuffed circuit boards) amps with good iron and great tone, you’d have to pay a lot more for a new boutique amp. And these can be had needing only minor work (in many cases). What’s not to love?

But back to this model 75. The lush depth of the 7189s is apparent throughout the volume range of the amp. The tremolo is rich and VERY 60’s sounding. It has more of a rounded, gentle wave than a sharp cut-off helicopter tremolo, with no noticeable (or apparent) volume drop when the effect is engaged.

Also, one of the cool things about the 7189s is that they are not like the 7189A’s that are in some great amps, such as the killer Magnatone M10 (and most of the Magnatone Suitcase series). Whereas the very expensive (and increasingly rare) 7189A can’t be substituted with 7189s OR with EL84s (without modification), the 7189 CAN use a rugged EL84 with no modification. 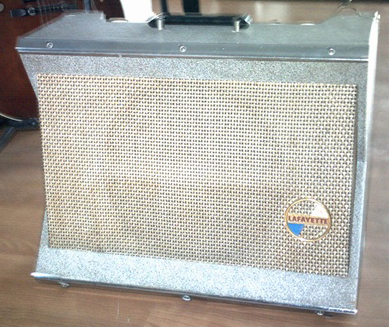 So, an amp with rich clean tones and a super overdrive sound that looks rad and weighs well under 30 pounds. Keep your eye out for this amp (and other Lafayette models—some of which were made by the same factory that made Univox amps—some don’t seem to be. It’s a crapshoot with 60’s Japanese amps).

Are there any problems with this amp? The handle rattles. Annoying, but hardly the end of the world…just use a little form when you’re recording. Not so bad.

It also digs pedals. I’ve added a germanium boost to this and it positively blooms on the notes. Add some reverb and the lower volume cleans are lush and astounding. In an amp/tone world where so many players are looking for the tone and range of the classic Tweed Deluxe, there are so many great tonal options in the 15 to 20 watt range. Enjoy and explore.