Hi there, my name is Mike Zimmerman and welcome to my series of articles about guitars and guitar collecting from the techie’s point of view. I’ve been collecting guitars for many years and have accumulated quite an interesting collection. I also have the usual, accompanying collection of sad tales of “the one that got away” or “the one I sold when I needed the money” etc. 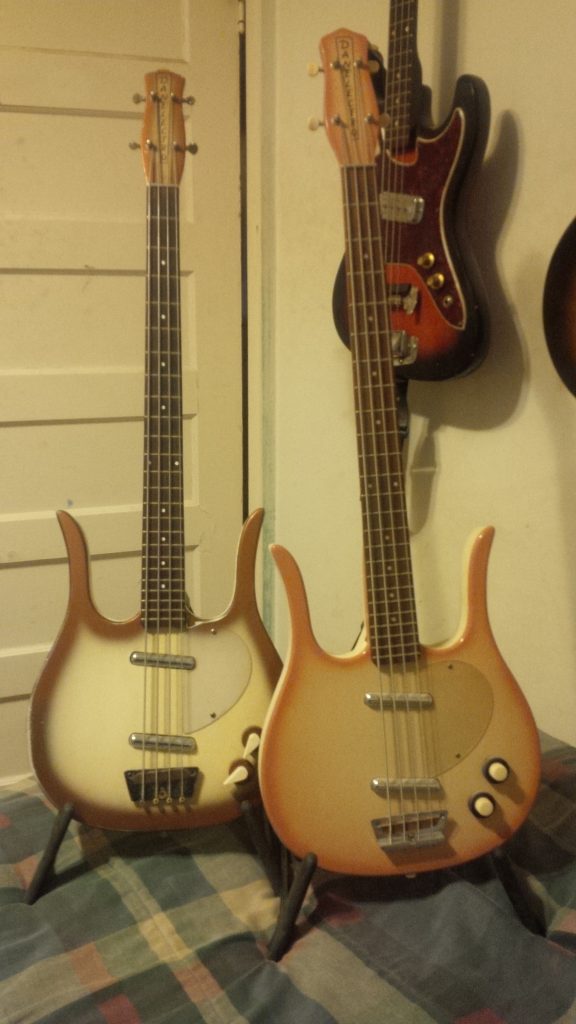 Strange but true, reissues can become collectables too (on the left an early ‘60s Danelectro Longhorn, on the right its late ‘90s reissue).

While I’ve been a long-time happy member of the Guitar Nut fraternity, I’ve also had a little advantage: I’m also a trained and accomplished guitar tech, and that means I can buy an instrument that needs work and do the work myself, whether I intend to keep it or re-sell it. Often, that’s not just a cost saving, it can also mean the difference between snapping up a bargain on a decent guitar (for fun or profit!) or getting stuck with an unplayable and unsellable pile of wood and metal.

About that “pile of wood and metal”, I’ll mention here that a repair client of mine who is a piano technician once referred to any piano that needs more work than it’s worth as a Piano-Shaped Object or PSO for short. I liked that and have since referred to any guitar as a Guitar-Shaped Object (or GSO) if it is so far gone that its restoration would take much more time, effort and money than it’s worth. GSO…remember that term. It will come up from time to time.

Anyway, that’s the angle I’d like to take in this series of articles for Eastwood: the happy marriage between technical knowledge and smart guitar collecting. For me, it’s a marriage that has worked for more than forty years.  For you, I want it to be an introduction to what you need to know to become a Smarter Guitar Nut too, with a special focus on oddball and unusual instruments. This is, after all, written for Eastwood!

The subjects I’ll cover include: 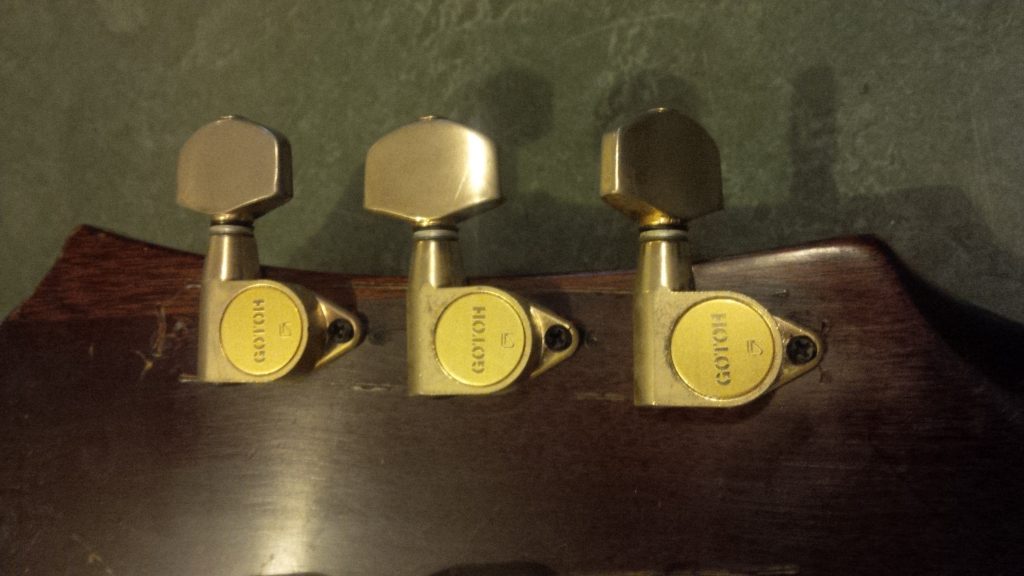 Probably the most common modification to vintage instruments: New tuners. When should this be done? How should it be done ? And, when should it not be done?

For each of these subjects, I’ll be getting into how you can do these things yourself and when to know that a pro should become involved. Ultimately, the goal is to make you a more knowledgeable guitar owner and collector.

First, here’s a little relevant personal history. I started repairing instruments when I was a teenager. I’d brought my prized Rickenbacker bass to a local shop to have it set up. I don’t think I even knew what “set up” meant…all I knew was it ought to get done. I must have read it somewhere.

When the bass was ready, the shop charged me only $6 rather than the expected $8 (remember, this was a long time ago!) because, as they explained, they couldn’t intonate the E string; the bridge saddle had been pulled back as far as it would go and the string was still slightly sharp when played up the neck. I was happy enough to save $2 (like I said, this was a long time ago) but, as well, my interest was tweaked. I asked what “intonation” meant and the explanation I got inspired me to pursue the issue. 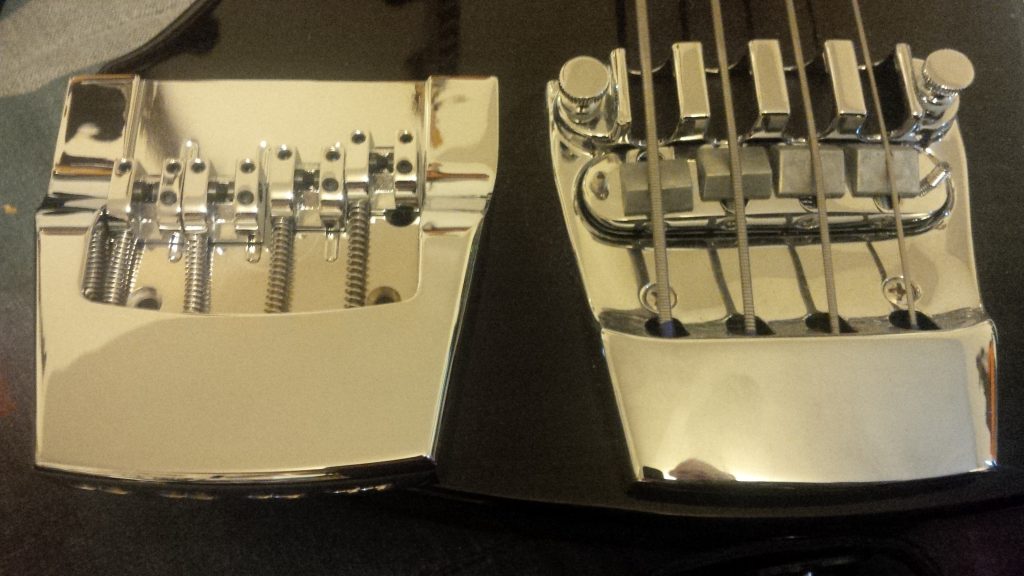 The modern solution for Riks with intonation problems: The Hipshot Bridge. There are many modern parts that can improve vintage instruments without modiufication.

I went home and filed the E string saddle slot to enable a bit more backwards adjustment and the operation was a complete success. From that moment on, I was both able to set up my own instruments and do favours for my musical friends. Most important, I’d learned two important basic principles about guitar repair that I’d like to impart to you now: 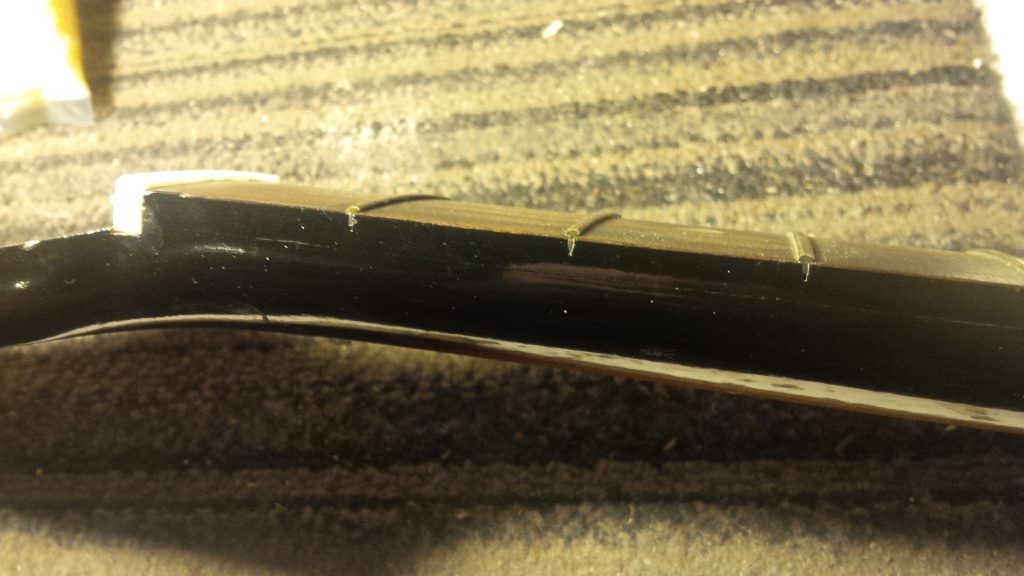 Should you install side position dots on a vintage neck that doesn’t have them? We’ll discuss.

All that, of course, has to be considered in the context of your skill level with basic repair techniques and tools. At the very least, applying the principles above will help you recognize when you need professional help. It will also make you a much more knowledgeable repair customer. That’s a real head start for you and, again, a potential cost savings.

So, to conclude my own story, I eventually got a job with Fender’s Canadian distributor doing warranty repairs, set-ups and even some custom work on new instruments. I went on to become one of the early partners in The Twelfth Fret, Toronto’s premier guitarists’ pro shop that’s still going strong almost 40 years later. I then formed the Amazing Musical Instrument Company, which manufactured innovative acoustic-electric instruments, primarily violins. For the past 30 years I’ve maintained a shop in my basement to do various repairs for a number of local guitarists and on the guitars that I buy, sell and keep. 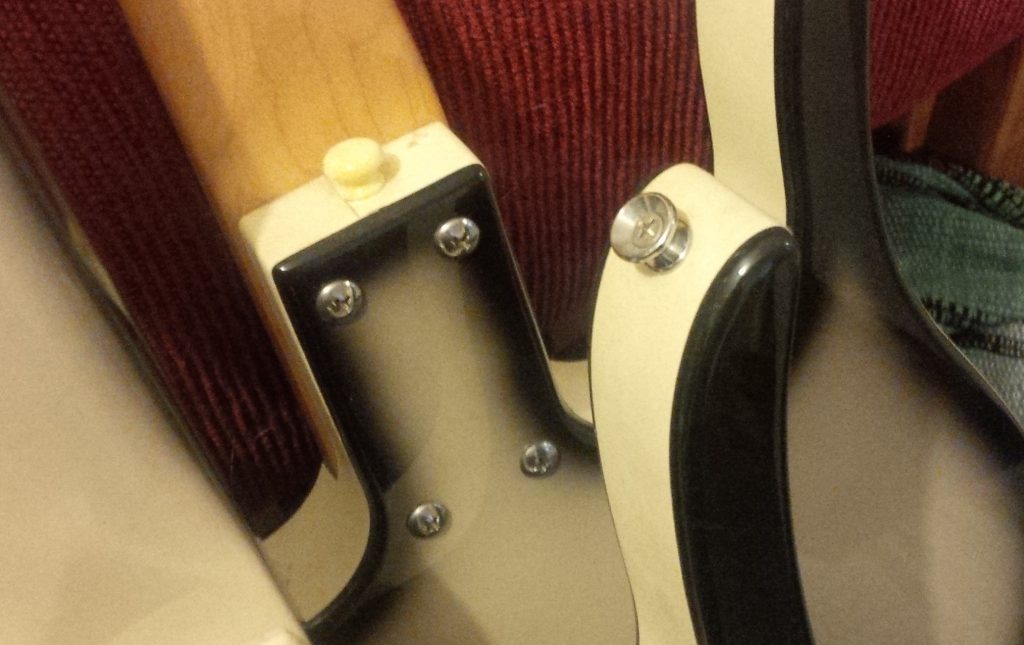 In the foreground, this Longhorn has had a metal strap button installed on the horn rather than the heel to improve balance and stability. Ideally, a modification to a vintage instrument should be reversible, like this one.

At each phase of my work I acquired new skills, experience and knowledge that I think will be useful to you and anyone interested in guitars and guitar collecting.

In my next article, we’ll start that process by looking at what you should look for in any guitar to make sure you don’t end up with – as you now know it’s called – a GSO.

6 thoughts on “THE SMARTER GUITAR NUT #1: So, You Want to be a Smarter Guitar Nut”