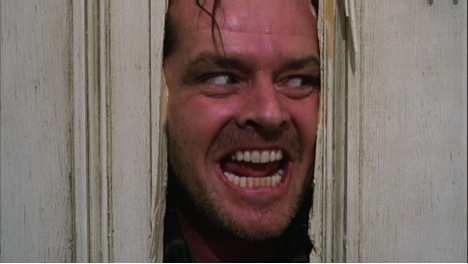 You know that suspenseful feeling you get when you’re watching a horror flick at the theatre? It’s dead silent, the protagonist slowly reaches for a door handle when suddenly a loud “BANG” erupts through the speakers as the door slams shut!
Even though it’s expected, it still makes you jump. If the door slam wasn’t loud enough, the moment wouldn’t have had the same effect. Or, if the calm quiet part beforehand was cluttered with other noises, the mood wouldn’t be quite right.

The range between the quietest sound something can make and the loudest is what’s known as the “dynamic range”, and it’s very important to make use of it in the correct way not just in movies, but also in your guitar playing.

Generally speaking, to get the best sound out of a tube amp you have to run it hot. However, that doesn’t necessarily mean you have to constantly dig in and play loud. Try experimenting with different thicknesses of picks, or even without a pick at all. That said, there’s nothing quite like a crushing strum of the strings through a stupidly loud amp.  Look at the iconic “windmill” gimmick – sure it looks cool, but the idea was first done for a heavy strike. 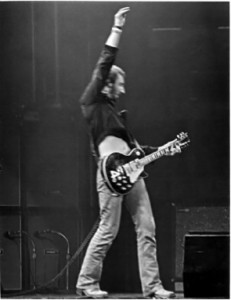 Using your fingers with a low gain setting at high volumes can give you a very warm sounding tone, while still enabling you to really bite in when necessary. The way you pluck the strings will have the greatest influence on the output you get though the amp, while the settings on the amp will process and alter the sounds you are feeding it. 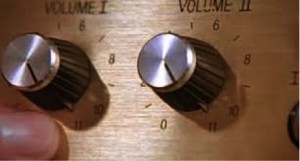 These knobs are essentially volume knobs that are assigned to a specific range of frequencies. The bass handles the lows, while the treble handles the highs. Therefore, if you’ve got everything turned on full, you’ve basically just turned up your overall volume rather than EQ anything. The best thing you can do is play with your settings, and understand that every guitar is different. You will likely adjust settings every time you plug a new guitar in.

All this being said, in a band situation it’s about sitting well in the mix. You don’t want to be fighting anyone for level, and you want to sound articulate and clear. Jumping from super quiet to super loud, or hitting notes slightly weaker than others can turn out sounding sloppy. If the style of music you are playing doesn’t require you to explore your entire dynamic range, it would be a good idea to shorten it! It’s for this reason that one of the most common things you’ll see on a guitarists pedal board is a compressor.

A compressor takes the dynamic range, and “squishes” it. Very basically, it is quieting down the super loud parts so everything is on a more level playing field. This way, slight variations in picking attack or finger pressure are not as obvious as they would be without a compressor. 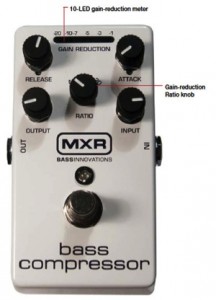 Many compressors only have a few controls, and often times things are labeled differently, but I’ll outline the main parameters here.

Threshold: The threshold control determines the level at which the compressor fixes the incoming signal. Whatever level you set the threshold to, everything above that value will be compressed, while whatever’s below it will remain untouched. So, the lower your threshold, the more you are actually compressing. Many guitar pedal compressors don’t have this control, meaning the threshold value is pre-set. The only way to adjust how much is being compressed with these type of pedals is to, well, make things louder! Increase your input, and more will be affected.

Attack: This is the setting that determines how quickly the compressor decreases the level when the threshold is reached.

Release:  This is the setting that determines how quickly the signal comes back to the level your ratio is set to once your input falls below the threshold.

Be careful setting your release! Let’s say you have a guitar part that’s really loud and very soon after dips down quiet.  With a release that’s too slow, the signal is still being compressed when you go to play that quiet part which may make it a lot quieter than you would like! On the other hand, setting a release value too quickly can give you an unwanted “pumping” sound as you hear the level being adjusted in and out.

Compressors can be difficult to learn, but once you’ve got it down you’ll greatly appreciate the difference they make in your dynamic range!