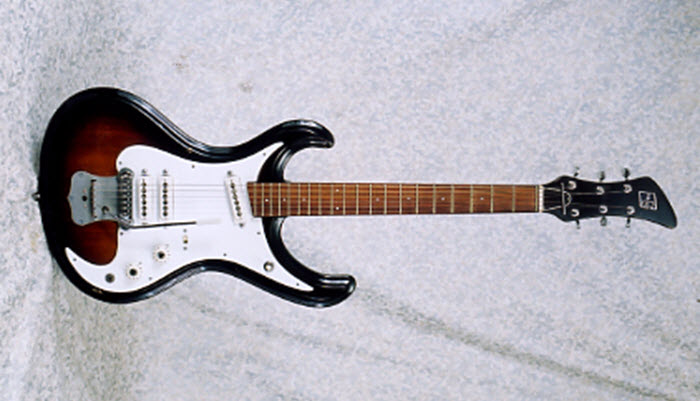 For this last musing on ugly duckling guitars, let us turn our attention to this example from Japan, this Guyatone LG-160T. The Fenton-Weill Tux-master we contemplated was pretty much unrelentingly ugly, only redeemable if you fondly remember it from your youth. The Burns UK Flyte was more of a space oddity than especially ugly, but it sure didn’t grow on me, at least. However, some unusual guitars do eventually win your heart over the more you stare at them. I think that this is the case here.

Japanese guitar makers made their names by emulating their competition largely for the American market. That strategy ultimately led to copy guitars, of which this is vaguely an example, although reflective of the peculiarities of Japanese aesthetics.

“Lutes,” in which family guitars reside, made their way pretty much everywhere in antiquity, including Japan, which favors the samisen. The first Europeans to “discover” Japan were the Portuguese, who were granted favored trading status by the Emperor. With the caveat that they couldn’t enter Japan proper, lest they pollute the sacred culture. They had to do their business from Okinawa.

Whether the Portuguese ever brought guitars with them is unknown, but Commodore Perry and the Americans certainly did when they arrived in 1853 on a mission to horn in on the Portuguese monopoly. Perry plied the Japanese ministers with tons of champagne and put on several blackface minstrel shows that featured both guitars and banjos. Perhaps it was the affinity between whiteface kabuki theater and the sailors’ burnt cork (more likely it was the huge stores of bubbly), but in any case Perry returned in 1854 with an open trade agreement with Japan. 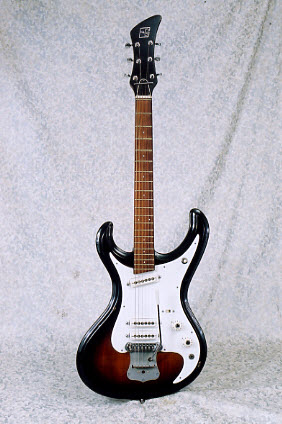 No, the Japanese didn’t convert to playing guitars (or banjos) on the spot. In fact, Westernization didn’t really begin until the 1920s. One of the main vectors was Hawaiian music. This was big in the U.S. from the early 20th Century on, but it really wasn’t coming to Japan from the Continental U.S. There was a huge Japanese population living in Hawaii and the taste for Hawaiian music—admittedly informed by American (and, ironically, Portuguese!!) influences—came from the original source in Hawaii. It was also in the 1920s that Andres Segovia toured Japan, igniting a passionate embrace of classical guitar playing. And, the 1920s saw the triumph of radio, so all sorts of Western music became available.

The problem was that Japanese music had not yet adopted the “tempered” scale that Western music has used since the 18th Century. That style makes minor compromises in the mathematical intervals of the modes codified by Pythagoras. In the old system you could play in maybe 1 or 2 modes during a piece, but any further modulation sounded out of tune, because it was. By “tempering” those scales, you can essentially switch from any key to another at any time. Anyhow, this process of adopting the tempered scale began in the 1920s, with a lot of interesting hybrid music being created. And making it possible to adopt Western instruments, such as the guitar and Hawaiian guitar…especially once it was electrified in the early 1930s. 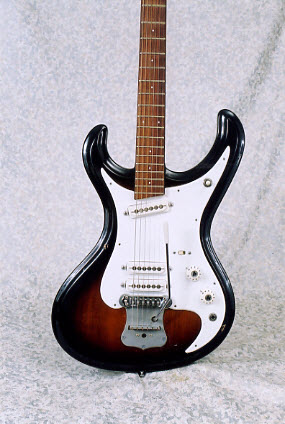 Guyatone was one of the earliest guitar manufacturers in Japan, having begun making electric Hawaiian lap steels in 1933. It was founded by Mitsuo Matsuki and Atsuo Kaneko (who would later found Teisco after the War).

Once Japanese guitar-makers entered the American market, they kind of gravitated naturally toward the copy strategy. First they produced guitars vaguely based on Fender’s Jazzmaster/Jaguar. Soon in the trenches with European makers, they began to emulate them (think Burns Bison). Then, The Ventures, having grown a bit stale in the U.S., began to tour Japan. The went over extremely well and acquired a legion of lifetime fans. By around the time this guitar was made, various Japanese makers were producing loose Mosrite inspirations. Or “copies,” if you like. 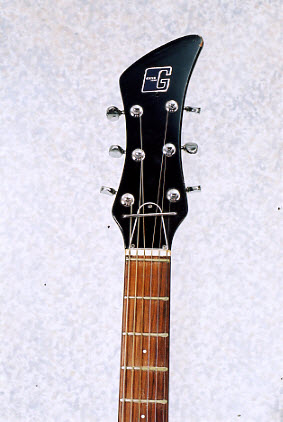 This 1967 Guyatone LG-160T is actually pretty sophisticated. The body is mahogany, and features a German carve relief, like a Mosrite. Pairing two single-coil pickups back at the bridge, like a humbucker, emulates Guyatone’s domestic competition Yamaha. These two pickups can function as a humbucker or, using the sliding switch, one single-coil. Ain’t no DiMarzio but pretty clever. This bridge actually has roller saddles to make the vibrato very effective.

By 1969 the true “copy era” had been launched with the first Les Paul and Tele copies, however crude at first.

When you first glimpse this guitar, it looks like a somewhat awkward Mosrite copy. Gaze a bit longer and it almost takes on the look of a Japanese orthographic character. Elegant, not so ugly. Consider it more and your heart begins to warm toward it’s symmetrical asymmetry for sure! Beautiful!

The copy strategy was good marketing (and helped learning to come more quickly), but it tended to obscure how much Japanese culture—how much whiteface kabuki—really contributed to the guitar equation.