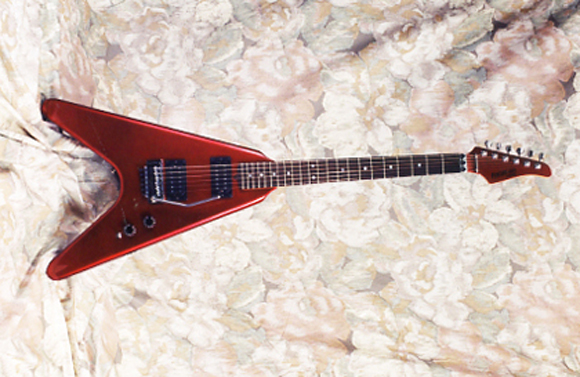 I love ironies, those unexpected little twists and turns that make you smile. And, if there’s a guitar story that’s full of more irony than that of Kramers guitars, I don’t know about it. That’s why I love guitars like this 1983 Kramer Focus K4000. It’s a knock-off of a Kramer guitar, but a copy of a Kramer made by Kramer itself. Or, actually, a copy of Kramer’s “copy” of a Gibson Flying V! You almost need a scorecard! You see the potential for ironies here…

For guitar enthusiasts with a short memory, Kramer’s Focus and Striker series guitars are a cause of some confusion and, to be sure, there have been some unscrupulous people who’ve taken advantage of this fact. Kramer, as you recall, began back in 1976 with the novel idea of building guitars with aluminum necks, sort of “improved” Travis Beans. Their guitars were kind of a niche item, well made and generally well-received by players, but certainly no threat to Gibson or Fender. Stanley Jordan, the jazz tapper, was probably their most famous player. Kramer had a little more success when it introduced the small-bodied, headless Duke guitars in the early 1980s. Andy Summers of The Police was big with his headless Steinberger guitar so the Duke had a following. 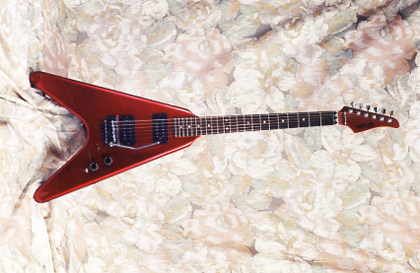 Kramer began to move away from the aluminum neck concept in around 1981 with the introduction of wood neck options. Actually, it’s around the subject of necks that one of the ironies swarm. Kramer designed but did not make its aluminum necks. They were sourced out to an aluminum fabricator, which makes perfect sense and is in no way unusual, especially when a novel material is involved. So, when Kramer began to use wooden necks, they logically turned to other vendors to obtain them. There were a variety of neck providers for Kramer over the years, but two of note where ESP, a Japanese company, and La-Si-Do, a Canadian company. The irony is that these were put on guitars that today are known as the “American” Kramers! By the way, I don’t know if Kramer made the bodies for its aluminum-necked guitars, but almost all—if not all—bodies on the wooden-neck American Kramers were made by a company called Sports.

Ironically, once Kramer began moving away from its unique original premise and capitulated to the common wooden neck, it began to take off phenomenally. Of course, having an endorsement of Edward Van Halen didn’t hurt. Nor did the early ‘80s infatuation with what would become known as the “Superstrat.” The Kramer Pacer (1983), along with Dean’s Bel Aire, both vie for the status as the first production Superstrats, available in versions with humbucker/single/single pickups and the soon-to-be-ubiquitous locking vibrato system. 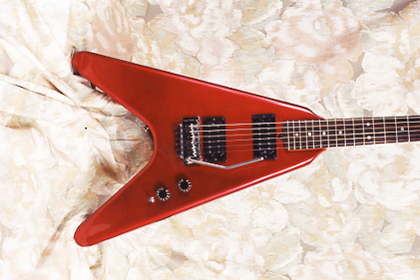 By 1983 Kramer was doing well enough to consider expanding with some budget lines made in Asia. It had already sourced necks from ESP in Japan, as well as offered ESP’s Flicker vibrato system as an option. Thus debuted the Kramer Focus line, made in Japan, in 1983. This was followed in 1984 by the Kramer Striker line, made in Korea.

The initial Kramer Focus line consisted of copies of the Baretta, Pacer, and early Vanguard models, plus Kramer’s early Fender-style bass and their thinner Stagemaster bass. At some point early on a copy of the Kramer Voyager joined the line.

Seen here is what’s probably a fairly rare early Focus by Kramer K4000 made in Japan. (As of yet I don’t believe the Japanese manufacturer has yet been identified, but these feel a lot like Chu-Shin.) Early Kramer Vanguards were modeled after the Flying V (1981-84). In 1985 the design changed to be more like the Randy Rhoads V made by Jackson, with a shortened lower wing. 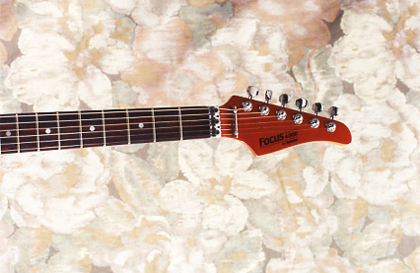 This is a really nice guitar, made nicer by the fact that it was found as unsold “New Old Stock” in the basement of the old 8th Street Music in Philadelphia. We know this is early because it has the “classic” headstock, later changed to droopy “bananas.” These are early unlabeled pickups, possibly Gotoh, but who knows? The double-locking Floyd Rose is likewise early, without fine tuners.

I think this is a very early 1983 Focus. While the exact sequence is a bit confusing, the original American Vanguard “Flying V” model was discontinued in 1984. It appears that in 1984 the Focus 4000 became a Pacer copy. In 1985, the Focus 4000 changed to the new Randy Rhoads shape.

In yet another irony, a lot of Kramer Focus guitars have been parted out. Early Focuses had a Focus by Kramer logo, but later models moved the Focus ID to the neck plate. Apparently quite a number of these, as well as Focus bodies, have been sold as “genuine American” Kramer parts. However, as we’ve seen, all but a few (made by Sports) Kramer wooden necks weren’t American-made in the first place!

In one more irony, the Kramer brand name is now owned by Gibson, the company that Kramer copied for this guitar! The name was owned by Henry Vaccaro, one of the original Kramer principals. He wanted to relaunch the Kramer brand in the late 1990s. He needed money so he sold the Kramer brand and model names to Gibson. Gibson subsequently released a line of very inexpensive Asian-made Kramers. Ironically, Gibson recently announced some upscale “copies” of Kramer’s legendary Pacer guitars! One last irony (I promise): I’m writing this essay about the irony of Kramers for Eastwood guitars, which specializes in producing “copies” of cool designs from the past. But I guess since Gibson has just reissued the Pacer, there won’t be an Eastwood Pacer any time soon!