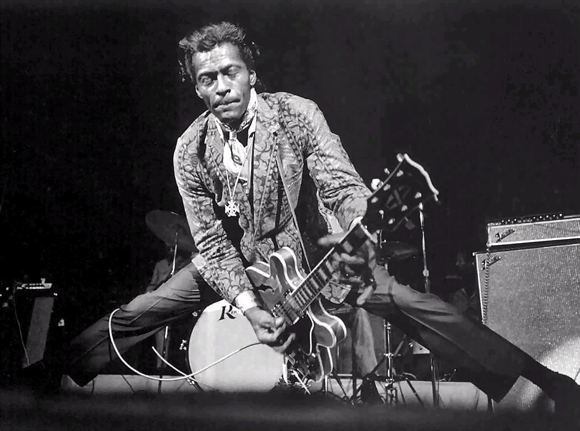 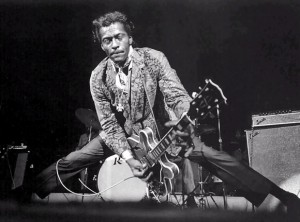 What makes a great guitar riff? Does it come down to the technical brilliance that goes into playing it, or the ease by which a simple but effective riff can be played by beginners? Similarly, what riffs act as useful indicators of changing periods in music, and how have they transcended their status within songs to almost stand in for a whole band’s career? The following list represents an effort to put together some of the best guitar riffs, which are presented in rough order of influence through to some personal favourites at the top of the list.

Included on this list almost solely due to its iconic appearance in Back to the Future, ‘Johnny B. Goode’s’ electric riff arguably stands in for early rock and roll as much as Elvis Presley’s hip jigging on the Ed Sullivan Show. Simple, but invested with considerable power, Berry helped inspire a new generation of performers.

9. Start Me Up, Keith Richards

Reflecting The Rolling Stone’s powerful, pop-edged take on the blues, the open G tuning and percussive opening to Start Me Up by Keith Richards says all you need to know about the band’s swaggering sound. Originally Recorded in the mid 1970s, ‘Start Me Up’ appeared on the 1981 album Tattoo You.

Perhaps the first riff that everyone tries when they get their first distortion pedal, ‘Smells Like Teen Spirit’s stripped down appeal and instinctive use of a few chords still sounds as powerful today as in 1991.

If ‘Teen Spirit’ marked the breakaway of Seattle grunge from the excesses of West Coast hair metal, ‘Sweet Child O’Mine’ remains the key example of how the pomp and swagger of the LA scene could be boiled down to Slash’s virtuoso opening riff.

5. Smoke On The Water, Ritchie Blackmore

Perhaps the most imitated riff for beginners, Deep Purple’s ‘Smoke On The Water’ is simple but highly effective, and represents a rare riff that can be picked up by a new player on the first day of owning a guitar.

A tie for third place, Lynyrd Skynyrd can be criticised for turning every rock encore into a crowd chant for ‘Free Bird’, the band’s oftentimes 14 minute closure to their shows. ‘Sweet Home Alabama’s’ infectious riff, however, remains one of the most memorable, and oft imitated examples of its kind.

The perfect embodiment of Jimmy Page’s technical mastery during Led Zeppelin’s peak, ‘Stairway to Heaven’ gradually builds around an opening riff that most just about manage to learn before taking on the rest of the song.

Just edging out ‘Stairway’ is Aerosmith’s ‘Walk This Way,’ if only for the fact that it fused rock and rap music around a central riff that has been much imitated, but rarely bettered.