Recently in a television interview, Linda Ronstadt was asked what it was like on a tour bus with an all-guy band. She started to give a politic answer and then changed her mind, admitting that “they were a bunch of cowboys.” I think we all know what she meant. It was the kind of macho gestalt that led a company like Ampeg to name its immediately post-Dan-Armstrong line of guitars the, uh, Stud series. Stud, eh?! Geddit?! Har, har.

Ok, it was the early 1970s so Ampeg can be forgiven for being well behind the curve in the politically correct category (I’m not even sure that political correctness had been fully invented yet at that time). Still, you gotta admire the chutzpah and it’s hard not to like any line of guitars called Stud. Sounds like it should be a Paul Newman movie.

Anyhow, all the yuks aside, the use of the Stud name was kind of eerily appropriate. These guitars were loosely speaking what we’d today call “copy guitars” in that they are based on American guitar designs popular at the time. They appeared just as the whole copy strategy was unfolding. Importers/distributors were producing copies mainly of Gibson guitars, since they yielded the most profit, but also of Fender and occasionally Guild guitars and basses. Even American guitar companies themselves hopped on the copy bandwagon. Gibson itself imported Japanese “copies” of some of its Epiphone models, and both Martin and Guild marketed lines of copy guitars until they wised up to the potential threats to their business. 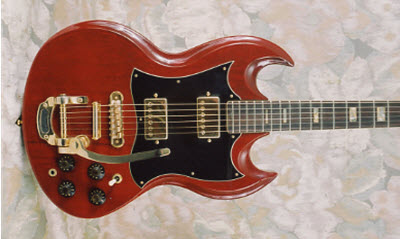 The Ampeg Studs were part of this whole copy scene, but they were aptly named because, unlike many of their competitors—the Ibanezes and Arias of the world—these were really over the top. They really were Studs!

Ampeg has always been better known as an amplifier company, although the very name refers to an amplifying “peg” or leg for a doghouse bass fiddle. Indeed, Ampeg’s first stringed instruments were electric Baby Basses in the 1960s. In 1969 Ampeg struck a deal with then hot guitar designer Dan Armstrong, who came up with the idea for those wonderful Plexiglas “See-through” guitars and basses. These were made into 1971 when Armstrong left the arrangement over a financial disagreement.

While rough copies of Rickenbackers and Mosrites appeared in Japan as early as 1968, followed by some somewhat crude Les Pauls, it was really the Plexiglas Ampegs that the Japanese manufacturers pounced on, producing near and pretty exact copies by 1970. That kick-started the whole copy movement.

Around the time that the Plexiglas guitars and basses disappeared, Ampeg was sold to Selmer Band Instruments in Elkhart, IN. It was the Selmer incarnation of Ampeg that decided in 1973 to bring in the Studs.

The Ampeg Studs included 5 guitars and 2 basses. Three guitars, including this model, were based off of the twin humbucker Gibson SG: the Stud GE-100 with a stoptail, the Stud GET-100 with a vibrato, and this Super Stud GE-500. Two guitars were based off of the Fender Telecaster, the Heavy Stud GE-150 with two single-coil pickups and the GEH-150 with ‘buckers. Two Fender-style basses included the Little Stud GEB-101 with one single-coil pickup and the Big Stud GEB-750 with a single and mini-humbucker. Except for the Super Stud seen here, most of these had laminated bodies with either grained cedar, grained cherry, or a black finish.

This Super Stud has a one-piece maple body. It might have been better named as Heavy Stud because this is one hefty axe. The neck is bolted on rather than set in like a real SG, but, as much as I love set-neck guitars, you have to admit that it sure is easy to get a great set-up on a bolt-neck guitar, especially if it’s not premium grade. That said, this is a pretty darned good guitar. The abalonoid inlays look great on stage but are kind of cheesy up close, unless you’re like me and love any kind of bling. These ain’t DiMarzio pickups, but they’re quite adequate, especially if you’re going to pump this through a nifty Maestro effect pedal or two, and why wouldn’t you? And a little (or big) Ampeg amp.

There’s an illusion that 1970s Japanese copy guitars were legion. Twasn’t so. Most came in in relatively small batches and are nowhere as plentiful as some think. The Ampeg Studs don’t come around all that often, so they’re probably pretty rare. There’s no way to date these precisely because before 1975-76 most Japanese guitars did not have serial numbers, related to my previous point. They weren’t numerous enough to worry about returns and warranties. The Ampeg Stud line was only available from 1973-75, so you have a less than 2-year window to date with.

Linda Ronstadt’s “cowboys” certainly didn’t play Ampeg Studs, however apropos they might have been on that tour bus. Nevertheless, all of us who play guitar have a little bit of stud in our DNA and deserve to play a Super Stud! Plus, you getcher money fer nothing and yer chicks for free! 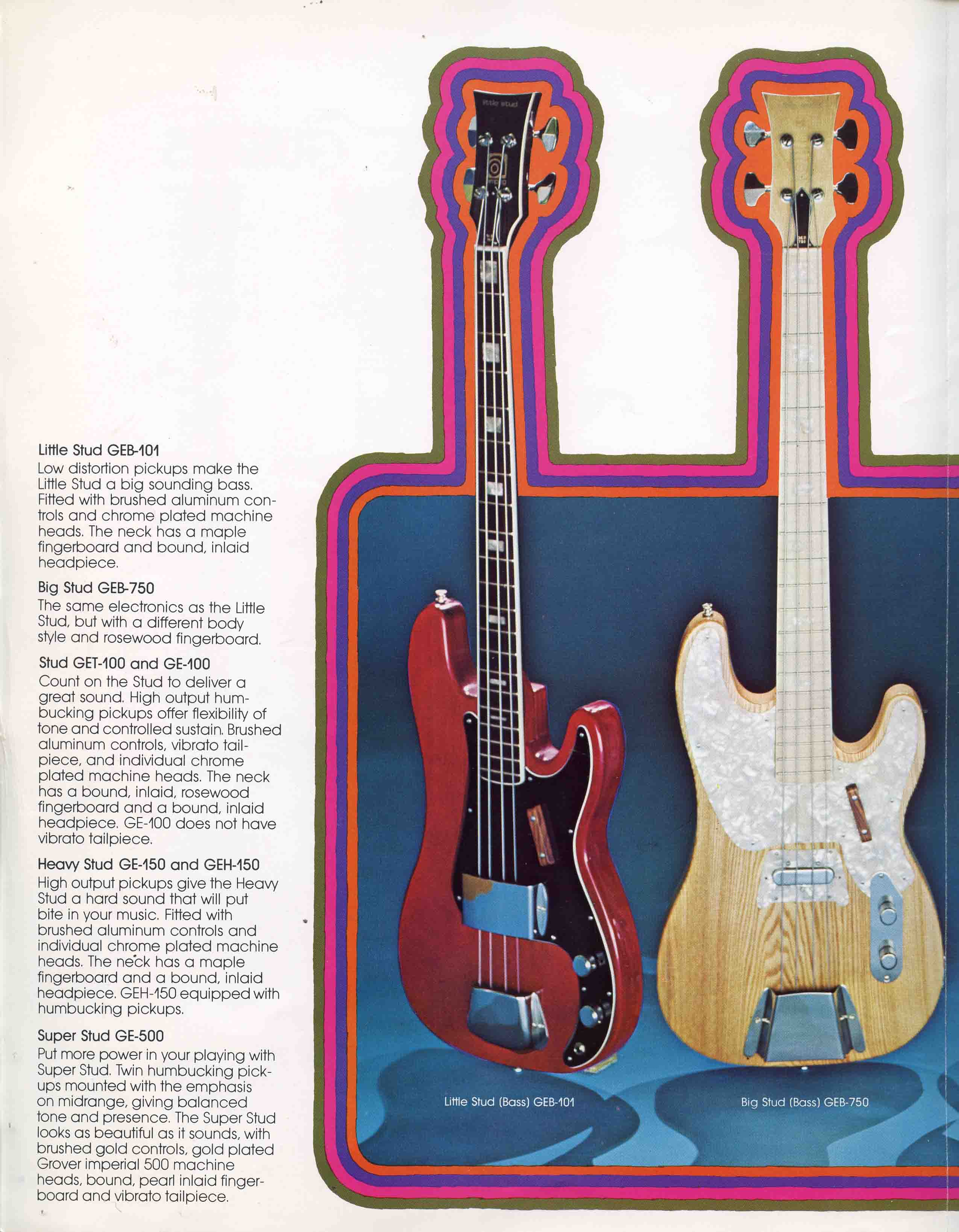 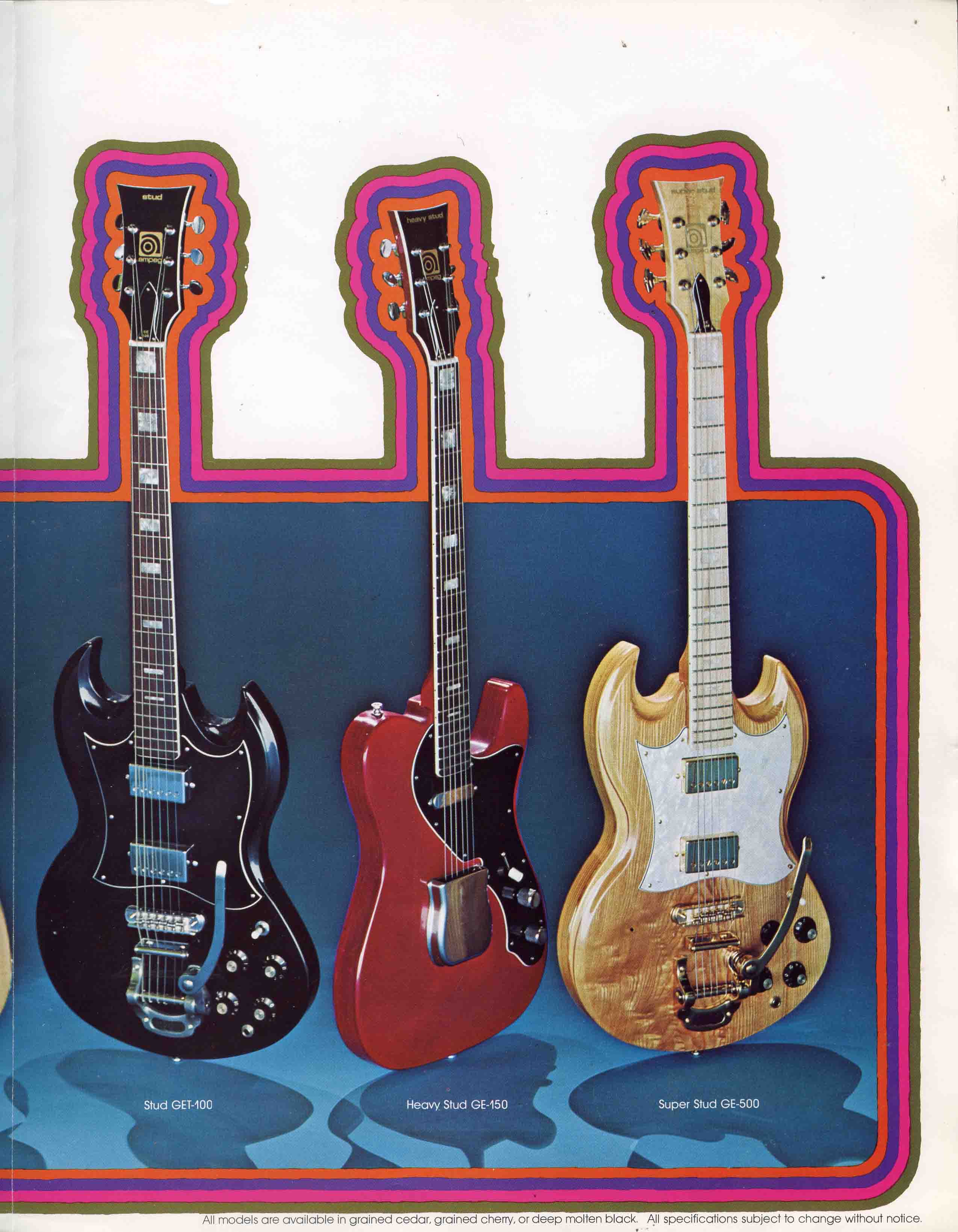