A buddy of mine (thanks, Garrett!) tipped me to this model on eBay. I’ve long been a lover of 1960’s Italian-made guitars. One of my great regrets is letting go of a Sano hollowbody that was, in all but name, the same as the hollowbody Galanti Rangemaster.

What makes these guitars special? The necks, mostly. If you like think, very fast-playing necks, vintage Italian guitars may be your thing. This “Jetstar” model has the normal zippy neck, plus some other very cool feature—not the least of which are the (typical to Italian guitars made by factories more accustomed to cranking out accordions) push buttons for the pickup selectors. 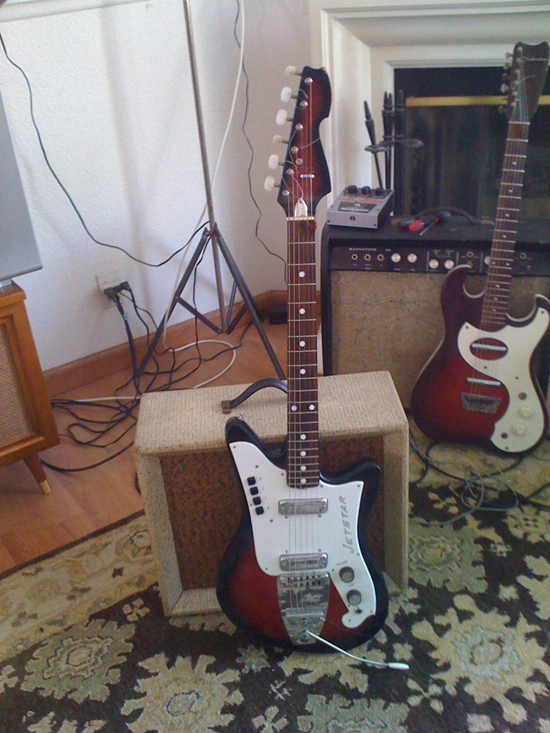 This model has a rather strange tone set-up. The buttons are labeled 0/1/2/M. You can either have the bridge pickup selected (setting 2), or the neck pickup (setting 1), or some cross between them that’s choked with a treble-cutting resistor (setting M). Or, you can hit the button closest to the strap on the treble horn (setting 0), which cuts the guitar off entirely (?!). Why anyone would need a kill switch on a guitar is beyond me. Unless you wanted to do that cool Morse-code sound at the end of “London Calling” (I may have answered my own question). But that Morse-code on/off only works with a toggle switch, not so well with a slower-to-operate button. But several 60’s Japanese and Italian models seem to have a button that turns everything off. Odd.

But the guitar plays like butter. Fast and slick—and the intonation is easy to set correctly. The bridge is pretty high-end, made very solidly with smooth slots and a center-loaded whammy bar with the feel and sweep of a Jazzmaster or Jaguar. And that’s who this guitar would probably appeal to the most—people who dig Jags and Jazzmasters, with a slightly more lo-fi, garage vibe to the tone. The tuners are high-end, as well—teardrop shaped with slightly pearloid plastic. Pretty.

And how is the tone? Like I say, very garage, very 60’s. Raw enough to play overdriven punk and grungy blues. The pickups sound a bit like a combination of a P-90 and a Teisco gold foil. Fair amount of snarl if you want it, but also full of some pretty cool surf tones if you want. For a single-coil guitar, there’s a good amount of sustain, too—plenty more than the Fenders mentioned here. The down-angle of the strings at the bridge eliminates the plinky lack of sustain that can plague a Jazzmaster (much as I love them). The tone is very balanced—overall, the guitar sits dead center in a midrange between the brightness of a Strat and the rich darkness of a Les Paul or 335. 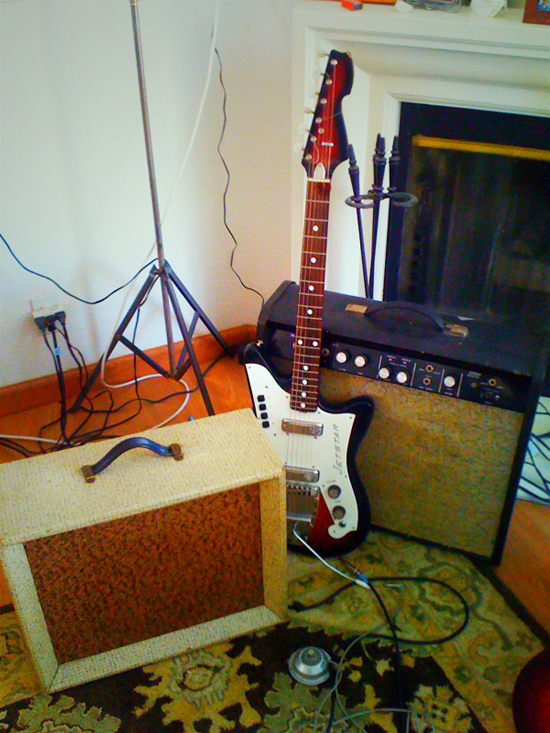 Put it together with the Magnatone 431(the one sitting behind the Danelectro in the pictures), and you have a great surf machine with some reverb and that wonderful Magnatone vibrato (OR tremolo, as this model Maggie has both choices—too cool). Plus it into the other amp pictured, the Lectrolab R600 (a truly amazing dual 6V6 amp that I’ll cover in a review soon), and it’s straight out 1950’s Chicago blues. Crank it up and you’re in Neil Young and Crazy Horse RAGGED GLORY territory. Really—play this through a fully-open overdriven amp and the tone is incredible.

The neck pickup is fat and rich, while the bridge has a fair amount of bite (less than a Jaguar or Strat—closer to the bridge PU of a Jazzmaster). The only thing that can be an issue (or it can be sonic joy, depending on who’s playing) is the pickups are very microphonic and the guitar can squeal feedback a little quicker than most solidbodies tend to do.

For anyone who’d be interested in buying a Jazzmaster, Jaguar or Mustang, you could do well (and save a few bucks in the process) grabbing one of these Galantis. They aren’t that easy to come by, but they aren’t super rare, either. Mine was beaten up and needed a neck repair, so I got a great deal on it (along with the original, form-fit case). But, if you’re looking to find a mint one, they seem to be out there in the $400-600 range as of this writing (Oct, 2010).

It’s not the MOST versatile machine you’ll add to your collection. But it sounds and plays great, and looks pretty fabulous, too. It’s become my number one guitar in my main garage/roots band. Really—plug it straight into a good amp and it sounds like you’re in a nice two-car garage in 1968, with mom and dad’s Falcon and Mustang (my family had cool cars) pulled out in the driveway. It’s not just a guitar—it’s a time machine!