How often have you ever walked into a music store—an admittedly increasingly exotic experience in this internet age—and had the salesman practically beg you to buy a guitar at a bargain basement price? My guess is not often! Nevertheless, that’s exactly what happened to me with this 1990 PBC GTS 200S! 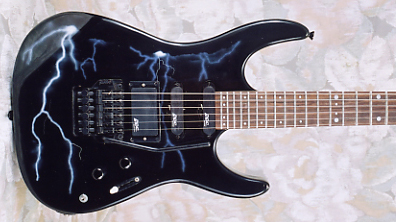 The usual scenario, of course, involves holding onto a poker face, disguising your interest in some treasure or other, and finally ending up in a negotiation to wrangle the prize at the best—that is lowest—price. Not this time. I was casually cruising through Cintioli Music in Philadelphia, a legendary music store, when a salesman who knew me said “Psst,” and pointed to this guitar sitting on a stand on the counter. “Take this off my hands, please.” I shrugged. I had no idea what it was. Then he said the magic words. “Seventy five bucks.” Well, it did have a cool lightning bolt and the original hardshell case. What the hey. It was mine. Another mystery to solve…

It turned out that this guitar featured some very cool technology, had a really interesting pedigree, and was actually a local product built—in nearby Coopersburg, Pennsylvania—by a significant guitar designer, Dave Bunker. Yes, of the Boston Bunkers, though some generations and a century or so removed to the Pacific Northwest.

Dave was born on January 3, 1935, in Bunker Creek, Washington (his family has a knack for naming places). His was a musical family and he learned guitar and began teaching in Puyallup. Then in 1955 he went to one of those promotional workshops Gretsch was throwing starring the Ohio-born tapping-style genius Jimmie Webster. Bunker had his mission.

Bunker went on to have several successful music acts playing Las Vegas and later cruise ships. He designed the guitars for his act and Bunker guitars are some of the coolest unique guitars in guitar history. All were designed to maximize his “touch” technique. Detachable wings off a central core body, six individual pole pickups. Eventually leading to his “Touch Guitar.” Locking nuts and butt-end tuners? Dave. But those are all ancillary to this story!

Probably the central theme of Dave Bunker’s guitar contributions was his development of the “tension-free” neck in the 1960s. Bunker found that he was getting dead spots above the 10th fret caused by the tightening of the truss rod, which anchored right around there. He came up with the notion of taking all the tension off the neck by putting a metal bar into a channel through the neck, attaching the bar to the body and the head, leaving the neck itself to float free and be more resonant. Good for tapping!

The tension-free neck would provide the basis for all of Bunker’s subsequent guitar designing.

In 1989 while demonstrating his Touch Guitar at the Los Angeles NAMM show, Bunker met John Pearse, the colorful guitarist and string/accessory maven living in Pennsylvania. While performing on a cruise ship in Alaska the following year, Pearse contacted Dave about joining a new guitar manufacturing venture. With a partner named Paul Chernay to handle financing, Bunker found himself in charge of design and production of guitars for PBC Guitar Technology—Pearse-Bunker-Chernay—located just outside Bethlehem, Pennsylvania, about 50 miles north of Philly. Pearse quickly left the partnership over a disagreement.

In any case, the result was a line of interesting, mostly hollowbody guitars with Bunker-designed pickups…and the patented tension-free neck. The PBC line met with moderate success, but PBCs came into being at a time when retro guitars and, ironically, the Seattle sound were hitting big. Still, things really began to take off when Bunker’s guitars were discovered by Jim Donahue, then designing guitars for Ibanez in nearby Bensalem, Pennsylvania. Ibanez contracted with PBC to make its USA Custom USRG Series with Bunker’s floating necks, a line that debuted in 1994. Ibanez was pleased with the project and wanted to expand the relationship in 1996. However, Chernay had issues with working with the Japanese, and deep-sixed the contract. And, as it happened, PBC, which bit the dust along with the USRGs that year.

Probably the most conventional-looking guitar in the PBC line was this GTS 200S, with its Strat-style solid body. There was a GTS 200, the same except without the lightning graphics. Nevertheless, it had the tension-free neck, plus the quite-respectable PBC Spectrutone humbucker and two PBC Banshee singles. Not to mention a “sound reflection shield,” a recessed Kahler Spyder vibrato, and a coil-tap on the ‘bucker. A two-octave neck is never bad! Turns out this is one heck of a shred machine! Good price, too! This guitar originally listed for $900! It’s pretty much in like new condition.

And probably pretty rare. PBC output never got that large, and this model was only made for a couple of years.

After the PBC and Ibanez fiasco, Dave Bunker—now in his 70s—moved back to his native Washington State and began custom building Bunker guitars again, making guitars more-or-less based on his PBC designs. He’s still doing it today.

So, that salesman’s “Psst” worked out pretty good! Cool guitar. Cool piece of history. Like I said, a great price! And no negotiations. Glad I listened.

9 thoughts on “Tension Reduction, But Not With Shiatsu (1990 PBC GTS 200S Electric Guitar)”