When I first learned of this guitar, it was known among cognoscenti as the State of Ohio guitar. I once wrote and essay in which I dubbed it The Ugliest Guitar In The World. All of us had a point. The real name, however, is the Kay Solo King K4102, and it dates to that heady period just before guitars really took off in 1960. Clearly somebody was hung over at Kay that day! When I got a chance to actually have one, how could I pass it up?

Believe it or not, Kay was probably the first company to produce an electric guitar. The Kay Musical Instrument Company began in Chicago in 1890 as the Groehsl Company, changing its name to the Stromberg-Voisinet Company in 1921. (It changed to Kay-Kraft in the early ’30s, then just Kay.) While there are unsubstantiated reports that Gibson’s Lloyd Loar experimented with electricity in the early 1920s, it’s hard to imagine what he could have done. Electronic recording and amplification were not invented until 1924-25. Lyon & Healy reportedly had an electronic bass in 1923, but unfortunately it electrocuted players. Bummer. In October of 1928 S-V introduced the Stromberg Electro, a flattop with an electro-magnetic transducer that was played through an amp with no controls. A few Chicago radio players embraced the new technology, but the technology wasn’t there yet and only a couple hundred Electros were made. Modern-style electrics didn’t appear until 1931. Except for lap steels, and perhaps the early bakelite Rickenbacker Spanish guitars, Depression-era electrics were mainly archtops. 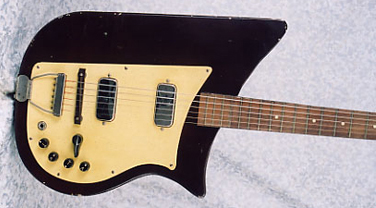 After the War, Fender’s Telecaster didn’t seem to get much attention from mass manufacturers, but the Gibson Les Paul did, and by 1953 Kay, Harmony, and Valco were producing solidbodies. Kay’s, interestingly enough, were unibody construction, which basically means neck-through-body.

It was this concept that still shaped the Solo King, but what were they thinking?! It’s really hard to get your mind around this thing. It also appears to have unibody construction: one piece of wood. With the meat-cleaver head and BuckeyeState profile, it’s like no other guitar before or since. The effect is further enhanced by a – shall wee say – chocolate brown finish. The pickguard is made of a speckled formica. These single-coil pickups, while primitive, are actually not that bad, with a clean, crisp ’50s sound. A single-pickup version was also produced. The archtop-style bridge makes intonation a challenge and the fret job is a bit sloppy, but otherwise this doesn’t play that badly……. If, that is, you have the moxy to appear in public holding one! Can you see in the hands of Duane Eddy or the Ventures?

Needless to say, the Kay Solo King didn’t catch on. The following year someone took a band-saw to the design and rounded off the lower bout to be more like a Les Paul. These were sold through Montgomery Ward. Another even weirder version had the upper shoulder and cutaway lopped off, and was sold as a Spiegel Old Kraftsman.

All these guitars were gone after 1961 and are particularly rare. I’ve seen guitars shaped like New Jersey, Texas, even the United States, but none really come up to the bad taste of the State of Ohio. Like I said, ugliest guitar in the world.