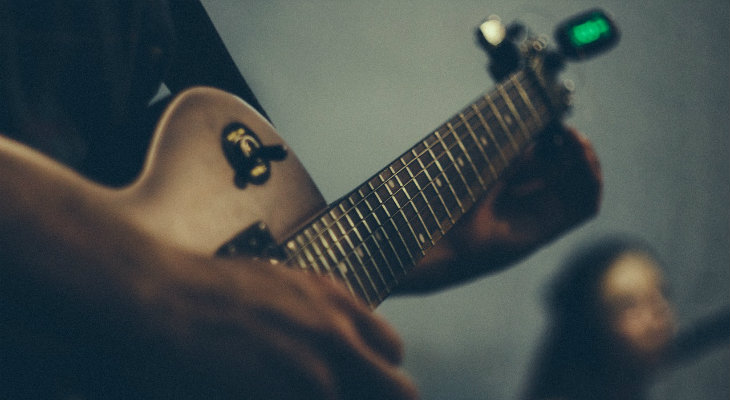 Let me start off by saying that No Guitar Will Play Perfectly In Tune. EVER. The tempered system of tuning upon which guitar fret placement relies on is imperfect, but it’s the best we can do. The system was designed by J.S. Bach in 1717 and first demonstrated on his work, The Well Tempered Clavier. Before Bach’s tempered tuning, fixed pitch instruments (keyboards, instruments with frets, etc.) were designed to play in one key at a time. If you needed to play in a different key, you’d use a different instrument or completely retune the one you had. Bach’s system redesigned the relationship between all of the notes so that the octaves in all keys would be an octave apart. In order for this to work, all of the notes in between the octaves had to be slightly out of tune. For folks with good ears, nothing played on a guitar or piano really sounds in tune.

That said, lets talk about intonation as it applies to your guitar. Basically, intonation is the process of setting all of the octaves on your guitar an octave apart, and eliminating some of the problems that may hinder this procedure.

Most guitars have a string length between the nut and bridge of between 24″ and 26″. If you were playing the guitar, as a slide instrument and not depressing the strings to the frets, setting the intonation would be a simple matter of placing the bridge of the instrument at the prescribed scale length. Since most guitarists press the stings down to fret them, simply setting the bridge to the scale length won’t work. When you press a string down, you bend it sharp. The bridge of the guitar needs to be moved in such a way as to lengthen the string beyond the calculated scale length to compensate for this. The amount of compensation is a function of string gauge, string core diameter, height of the string above the fingerboard, and the player’s technique. Basically speaking, the larger the core diameter, the harder you press, and higher the string height, the greater compensation.

Setting the intonation can be pretty easy or complex depending on how picky you are and the limitations of the design of your instrument. It is easiest to set intonation on electric guitars with; fully adjustable bridges, neck and pickups. It is most complex to do so on an acoustic without these features. Quick functional intonation settings can be accomplished by properly setting one set of octaves on each string, while those with good ears may want to set several sets of octave on each string and average the setting for optimal results.

Before intonation can be properly set, all of your ducks need to be in order. In other words, no matter what you do with string length, your guitar wont play in tune unless the neck is properly adjusted, the nut height is set so that the strings are the same height over the first fret as they are over the second fret when the strings are depressed on the first fret, and the pickups are far enough away from the strings so that their magnetic field doesn’t interfere with the vibration of the strings. If the frets on your guitar are worn or unlevel, this will also cause intonation discrepancies. All these items will be topics of future articles.

To properly set the intonation, you will need a good electronic tuner or a well trained ear and a tube amplifier. Most good guitar repair shops use strobe tuners by Peterson or Conn. These provide the best results, thought any quality electronic tuner should work.

Assuming the guitar is properly set up, you are now ready to set the intonation.

That’s about all for keeping your guitar in tune. I welcome any questions or comments.

Hi folks. I’m Scott Freilich. I built my first instrument in 1968, and have been repairing guitars professionally since 1973. I’ve run the guitar repair division at Top Shelf since 1979. I received training at Gibson’s old Kalamazoo plant, and have been a factory authorized luthier for Gibson, Fender, and Martin for over 20 years. My clients have included the Goo Goo Dolls, The Black Crows, Ani Di Franco, 10,000 Maniacs, Taj Mahal, Billy Sheehan, Percy Jones, and Melissa Ethridge. It would be my pleasure to provide you with any information regarding guitar repair, and maybe add you to my client list.

One thought on “Why Won’t My Guitar Play in Tune?!”