I’m not really an amplifier aficionado. I know that’s not politically correct. I tend to like solid state amps because they’re clean and let the sound of the guitar through. In fact, my favorite amp is a Polytone Mini Brute. It’s like 14″ cubed, easy to carry, and loud as hell. If I want to sound nasty, I punch in an old Rat, etc. But one thing I am a sucker for is the True Vibrato found on 1950s Magnatone amps. True Vibrato, of course, is pitch, not volume, modulation. Most amps have tremolo (volume mod). I’m not alone in liking Magnatone vibrato. That’s the shimmering sound you hear on those late ’50s Buddy Holly classics Words of Love and Peggy Sue.

To own an original Bigsby electric you’d probably need a quarter mil of the ready. But maybe not! You might be lucky enough to find one of Bigsby’s Magnatone creations for a heckuva lot less.

Magnatone’s True Vibrato appeared in 1956, the same year a lesser known event occurred in that storied company’s history. That was when they contracted with one of the legends of guitar history, Paul Bigsby, to design a line of electric Spanish guitars for them. Magnatone had been a major player in the Hawaiian lap steel game ever since its founding by the Dickerson Brothers back in the late 1930s in L.A. We all know Bigsby as the inventor of the hand vibrato that still bears his name. But he also gets credit for making the first ‘solidbody’ electric guitar for Merle Travis in 1947 (it was actually semi-hollow). The same guitar that another amp guy named Leo Fender took quite an interest in shortly before coming up with his Broadcaster. 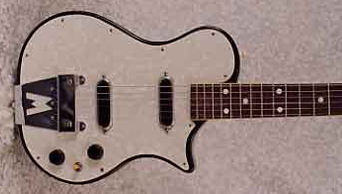 Bigsby’s first “commercial” design for Magnatone was the Mark III, a neck-through-body semi-hollow guitar, Bigsby’s take on a Ricky Combo. We know some of these were built because one turned up a few years back at an L.A.-area yard sale (how often have you had that fantasy!). But it appears that Magnatone’s production folks made some changes and almost all that are found with solid bodies and a glued-in neck with a “tongue” extension that slips in under the neck pickup. The formica pickguard and Daka-Ware knobs are a little dated now, but back in ’56 they were strictly the cat’s pajamas!

The Magnatone Mark IIIs are pretty cool, but aren’t truly professional guitars, like the spectacular Mark V that followed in 1957. These actually garnered a bunch of professional endorsements. Nevertheless, all these Bigsby Magnatones were among the better guitars of the 1950s.

How many early Magnatones were actually produced is a mystery, and they didn’t seem to do that well. They were gone by 1958 and replaced in ’59 by a new line designed by former National exec Paul Barth, though no Magnatone guitars ever conquered the guitar world, even when guitar ace Jimmy Bryant endorsed them in the mid-1960s.

So, next time you?re prowling a back rack or a yard sale, keep your eyes peeled for one of these Magnatones. It’s a genuine Bigsby and, when you push the large single-coils through True Vibrato, you get a classic ’50s sound that takes you to paradise! True words of love!