You dig oddball guitars and strange, rare equipment. Sure, a Fender Telecaster is a great guitar (I have a 1969, and I love it), but there’s something about the weird ones that pulls you in or you wouldn’t be reading this newsletter. Fenders, Gibsons and the rest of the big boys are fine, but if you want a guitar that looks like a kitchen counter, perhaps made out of something more…uh…interesting or futuristic than wood…or one with more buttons than your uncle’s accordion (and you know you do!), you are forced off the beaten path to find your treasure.

So, then, let’s say you’ve got your wonderful freakazoid guitar collection underway. What’s the next move for you’ You like collecting gear, but you think those folks who spend three grand on a 75 Strat are loons of the highest order. Why, for that kind of money, a sane person could buy ten guitars! (well, sorta sane, anyway) So you got a few offbeat guitars and now you need something to plug your Guyatones and Kawais and Kapas and Airlines and so on into. What’s the point of getting such a strange one-of-a-kind guitar and then plugging it into some amp that anyone could wander into a guitar center and buy off the rack. So, where do you go from here?

Here’s a bunch of oddball and wonderful off-brand sleeper amplifiers you may or may not have heard of. For each brand/model, I’ll include some of the features (the Skinny), the tube complement and the ease or lack of ease for a DIY-er to work on the amp (Geek Love), a sound comparison to a more familiar amplifier (Sounds Like), and what you might expect to pay, and what price would be an absolute steal (Price). I’ll also include a section on why you should want this amp, and why you might want to stay away from this amp. (Why You Want This Amp/Why You Don’t Want This Amp).

Here is a group of, in my opinion, seriously undervalued amps. Even the priciest of them are still, in these times of inflated value for anything tube or tweed, well worth the coin. 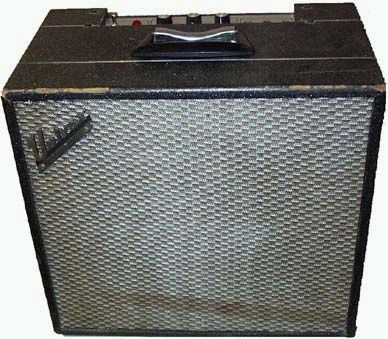 1) Univox U45 and Univox U60 Guitar Amplifiers

Got the blues, but don’t want your wallet to have them too’ Check out the Univox U45 and U60 models. 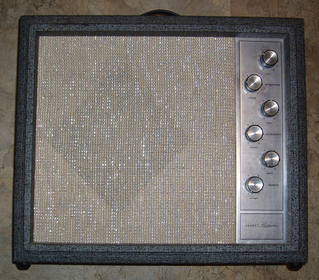 Since the boutique amp boom of the early 90’s, one of the most commonly copied circuits is the 50’s Fender Tweed Deluxe. And while this IS an awesome amp, one absolutely worthy of copying, there are several low-budget funky alternatives for those who love the bluesy grind of a 6V6 circuit. The most frequently seen, and hence, easiest to find are the Silvertone Amp 1472 and 1482 Model. AKA the “TV set” model. A new boutique version of this general circuit can cost you around a grand and up. Heck, a KIT for this amp goes from $400, and more. And those prices are legit – there are cool parts in them. But why not buy one of these models and get your hands dirty for under two hundred bucks and get that Link Wray Rumble tone on the cheap? 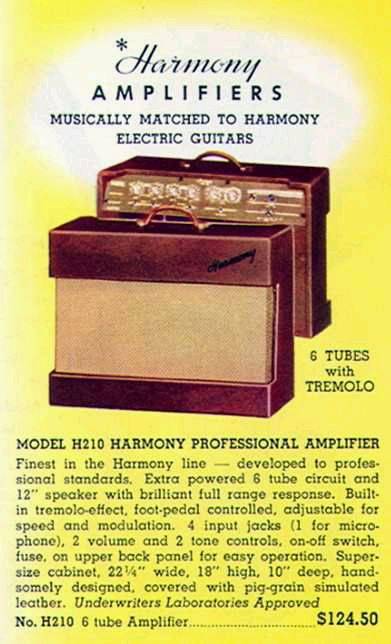 The Airline (made by Dano) mid-60’s 90813A amp. Much like the 1482 (the guts are the same), but a top mounted control panel, in black tolex-look paper. You can’t fit a 6L6 in these, as a result of the back cab angle, but otherwise, they are the same awesome amp. You can get these, often, in the $200 range. Highly recommended.

The Harmony 210 (made in the late 50’s by Valco). While several Valco models (mostly the SUPRO-labeled ones, as a result, partially of all the Jimmy Page rumored usage on the early Zep albums) are starting to fetch major dough on the vintage market, these Harmonys are still pretty much dirt-cheap. This may be partially as a result of Aspen Pittman’s misinformation about Harmony amps in the latest Tube Amp Book and we should thank him for this. Where else can you get a wood cabinet (mostly, anyway, except for the top) two 6V6 amp with a 12″ alnico Jensen, made by Valco, for under 200 bucks’ These are sweet amps, and they use a 6X5 rectifier, which is cheap and easy to find.

The later model Harmony 306A (in the black paper covering with the blue painted control panel with white chicken-head knobs) was also made by Valco and has the same features with only a 5Y3 rectifier as the difference from the Harmony above. You can get these between $200-300. The Jensen Special Design ceramic speaker is a nice feature – it sings the blues very well.

The best (and most rare) of this cool bunch, though, may be the Valco-made Kay 6V6 amp. These have all of the great sound and features of the amps above, but the added cool factor of a two-tone (cream and red) cabinet and a swirl grille cloth. PLUS, they use the more common (these days) 5Y3 rectifier, which also makes replacing (if you have to) the power transformer easier and cheaper. These go in the $175-275 range. These are frequently mis-labeled as “Airline” amps – if you see a two 6V6 amp with a 12″ speaker that looks like a bigger red and cream version of the familiar, small (and anemic) Kay 703, snag it, no matter what the seller is calling it. Inside, this and the Harmony 306A are the same amp. They sound sweet – and they look like what made have happened if Frigadaire and Studebaker merged and started making amps. 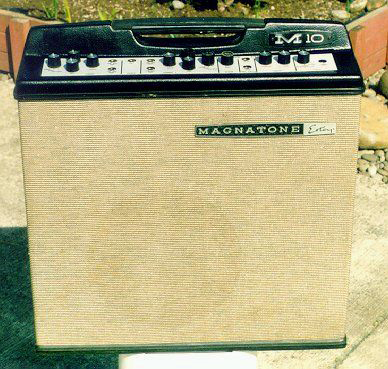 Want some more features, but still don’t want to take out a 2nd mortgage for your rocking amp collection? Try the Magnatone M10A. The easiest-to-find of the Magnatone (by this time in the mid 60’s, Estey-owned) suitcase models, these are either some of the ugliest or funkiest amplifier ever made, depending on your take on them. 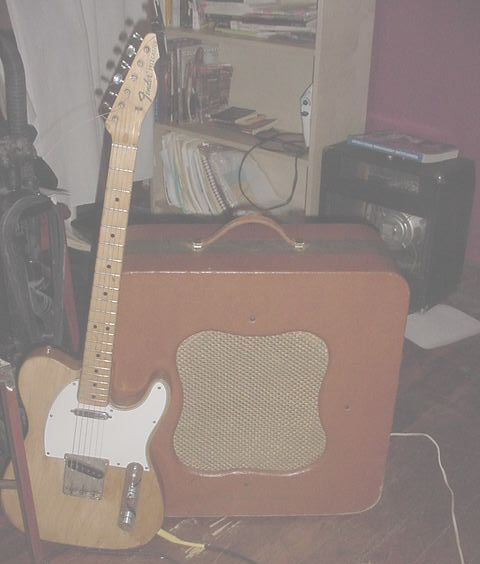 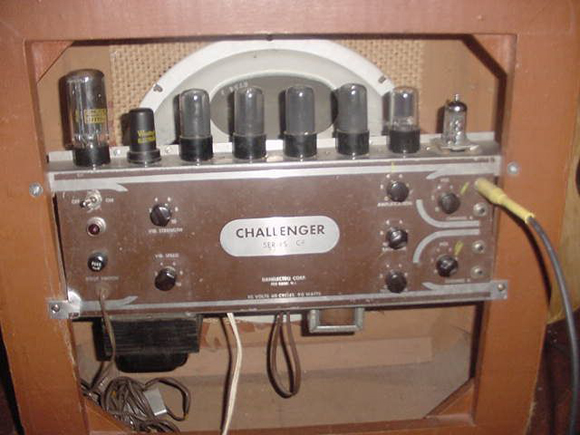 Who has ever played in a band with a guitar player would wouldn’t turn down because he (or she, though in my experience, this is sadly just us guys) couldn’t get ‘their tone’? Or, worse, who has BEEN that guitar player (my hand would be raised if I weren’t typing)? It’s an understandable, if annoying, dilemma. You want pure, beautiful, overdriven tone, but you can’t get it unless you amp is really pushed. If you own a Fender Twin Reverb, you may be the most hated person in your band. Want some great gigging tone with an early breakup, yet a lot of punch and a huge bottom’ You want a mid 50’sDanelectro Challenger (from their ‘C’ series). An amp that sounds huge, even at low volume settings.

In the wake of Jack White and the White Stripes success, the price of the Silvertone 1484 Twin Twelve (with the two 6L6’s and the 2X12′ cabinet) and the 1485 (with the four 6L6’s and the 6X10′ cabinet) have gone through the roof. They may be worth the prices they’re commanding, but they are no longer sleepers or unknowns on the used market. So, what’s a gear freak to do? Look to the Montgomery Ward/Valco two and four 6L6 heads. These are great amps, somewhat rare, but if and when you see them, they can be had for some really great prices.

The last amp on the list for now is where I turn away from the tubes and check out the solid state of the nation address. While, in general, tube amps are the thing for vintage tone, it’s true that solid state done right is better sounding than tubes done wrong. Also, if you loved the sound of the first Velvet Underground album, or many of the songs on the Nuggets compilations, you’ve been tapping those fingers on your steering wheel while listening to and groovin with transistors. So, my last amplifier here is a name you’ve heard, but maybe not a model many of us have played, the Silvertone 1464 SolidState Twin Twelve.

So, there you have it. Some affordable amplifiers that will go well with your oddball guitars. And they will keep your friends (and your drummer) shaking their heads and saying, ‘A new amp’ I thought you had an amp’ Why do you need two (or three, four, five, etc….whatever number your sickness has progressed to.)’ Tune up, plug in, drop out. Enjoy.