Last month, I was talking about the very cool little Guyatone 535 model that takes 2 EL84s (6BQ5s) for a clean, very chimey, shimmering tone. Plenty of British sounding chime and a great amp for 12 strings and clean tones. And this month, I’m going to talk about the Kalamazoo Reverb 12. Here’s another dual EL84 combo that gives further evidence that the circuit design has a lot (most everything) to do with the tone of an amp as, beyond sharing the same output tubes, it has very little in common with last month’s entry in the cheap amp chronicles. This amp has some great cleans, too, but they are nice dark, woody cleans—not the glassy chime from last month’s entry. 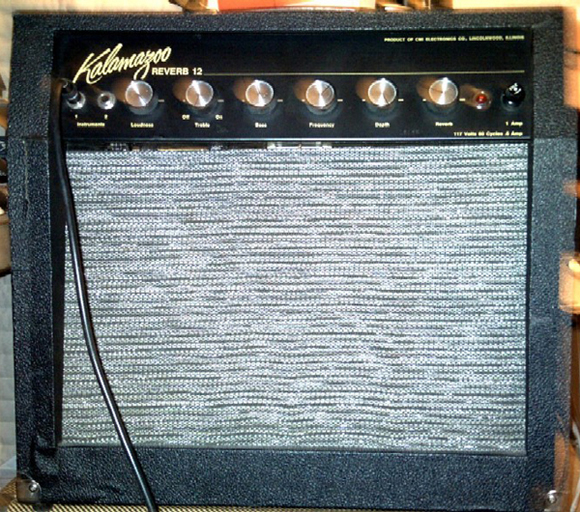 There are some great amps to be found in the Kalamazoo line (Gibson’s cheaper amp line in the mid to late 60’s). Among these are the Kalamazoo 1 and 2, which are single-ended EL 84 amps, the latter with a nice tremolo. These are killer little practice and recording amps with a nice clean and a good over-driven tone. If you’re looking for a good alternative to a Champ, here’s a frugal way you might want to go.

For giggable power, check out two of the real sleepers of the Kalamazoo line: the Bass 30 and Bass 50 models. These are pretty lousy bass amps, but pretty wonderful and affordable guitar amps (how many sub-par bass amps, from the Fender Bassman, to the Ampeg Bassman, to these Kalamazoo models have been used for an unintended purpose as guitar amps to stellar results?). The Bass 30, with its funky, very simple flip-out control panel, runs on 7591s and has two sweet sounding 10” Jensens in a closed back setup. Loud, with lots of nice crunch and not too heavy to lift. If you can find one, you’ll be surprised at what great tone you can get out of it—especially with single coil guitars.

The Bass 50 shares the cool flip-out panel and the closed back cabinet, but generates its output from two EL34s through two Jensen 12” speakers. Tons of grind—and great overdriven tones with single coils AND humbuckers. This is even more rare and hard to find than the Bass 30, but it’s definitely worth hunting down for some awesome overdrive tones on the cheap.

And in between the little practice amps and the converted bass amps? Well, there sits the tops of the Kalamazoo line (such as it is): the Reverb 12. This is often cited as Kalamazoo’s answer to the Fender Princeton and, it’s true, it shares several of that amp’s makeup on the surface: Both are low wattage (about 12 watts) push-pull amps with 10 inch speakers and tremolo and reverb. But, beyond the surface, the similarities end. The Kalamazoo is not as loud as the Princeton, for one, and you’d need a pretty quiet drummer if you were going to use it along (without an extension cab) on a gig (not impossible, but the drummer would have to play pretty light or with brushes). Also, the Kalamazoo doesn’t really start to get into overdrive until pretty late in its game (between 8 and 10 on its “Loudness” control)—whereas the Princeton starts singing a little earlier in its volume range.

What do you get in the trade-off? Some great tone in that wonderful zone between total clean and full-out distortion (think that early great Jimmy Bryant tone—slightly clean, but with a nice textured amount of grit and hair in the mix).

Also, the reverb and the tremolo are VERY nice for such a small amp. It’s a very versatile, great sounding little combo that’s great for bedroom playing, small band practices and, of course, recording. 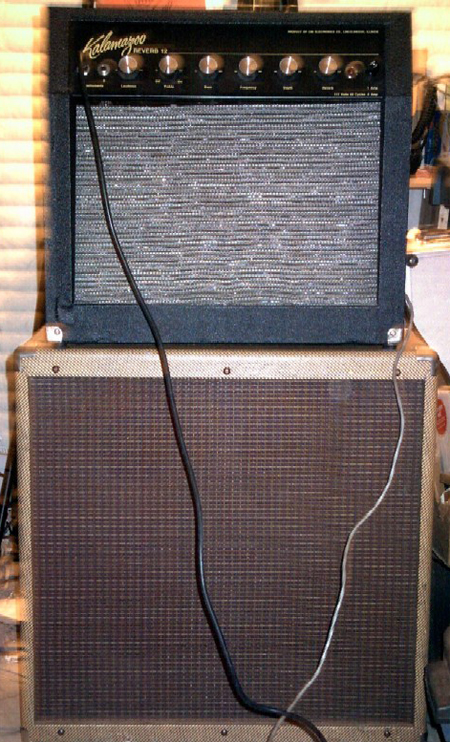 What’s under the hood? It’s a pretty simple, easy to work on design. Three 12AX7s (running the reverb driver, the tremolo oscillator, and the preamp and phase inverter duties), solid state rectification and two EL84’s for the output into a 10” speaker. I replaced the tired original CTS speaker in mine with a very efficient Celestion, and this really brought the amp to life—bringing out a LOT more volume and clarity and tonal dynamics. It’s a great little amp.

It’s also surprisingly versatile, as a result of the extension speaker output on the back. Run this little “practice” amp into a 4X10” cab, and wow, you suddenly have plenty of power for a gig! The amp also has an odd (for the era) RCA mono phono input (if you want to play along with a CD or one of those old-fangled records you hear us old timers talk about from time to time).

The control panel is simple, but kind of fun and funky, as it has, from left to right Loudness (instead of “Volume”), Treble (which also serves as the on/off switch, Bass, Frequency (for trem), Depth (also for trem), and Reverb. It has two inputs, but only one channel, and the inputs are the same level (that is neither is hotter than the other). The cab is ½ plywood and the construction is true point-to-point (not the hand-stuffed circuit board that often, erroneously, gets called point to point). It’s an easy to follow point to point—easy to work on, which you’ll probably have to do to at least replace the filter caps on these (which were a good deal cheater than the ones used by Fender, and they tend to go bad).

So, you get great cleans…a sweet singling overdrive when pushed to its limit and you can actually gig with it if you run an extension cab. AND they frequently (at least for now) sell for between $200 and $300. What’s not to love? Get yours now, while you can. A very cool amp, with its own sound—and a very usable sound at that.