The wonderful thing about the world of design is that every once in awhile you get to feel smug and sit back and say, “WHAT were they smoking?!” In the case of this 1965 Kay K350 Titan I, I’m not sure but what it wasn’t more a confluence of circumstances that created this Frankenstein, because parts of it are actually not that bad, and, to be honest, the quality is surprisingly good. But other parts are downright u-ugly.

Back in the day Kay was actually called Stromberg-Voisinet and actually produced the first documented electric guitar, the Stromberg Electro, in 1928. Good idea but it had some problems and promptly disappeared. Kay didn’t exactly rush back into electrics with any alacrity, but after the War, when it became clear that the electric Spanish guitar was going to be viable, Kay took the plunge like everyone else. Some of its guitars from the 1950s, like the Thin Twin, are classics of the era, though a little stodgy.

By the ’60s guitar boom, of course, Kay was pumping out trainloads of guitars. The market for these mainly beginner-level electric guitars was, of course, young Baby Boomers. By around 1960 Kay was making attempts at upgrading its image to a hipper one, with truly ugly guitars like the Solo King or “State of Ohio” guitar that we’ve talked about before. One of Kay’s improvements was the adoption of chrome plastic pickup covers with etched lines often called “Kleenex boxes” by collectors. They look cheesy to me, but cool cheesy, in a tacky sort of way, if you know what I mean.

But it’s really all about that headstock. Someone at Kay thought they needed to hippify the heads on their solidbodies and came up with what many collectors call the “bushwhacker” design. No chance of being sued by Fender on this puppy! What’s particularly amazing about it is that it must have been a bear to produce. The lower edge or throat is beveled away from the face, while the tip on the upper side is also beveled out, but just beyond the tuner buttons. There’s a ton of carving here in the days before numerical carving machines. 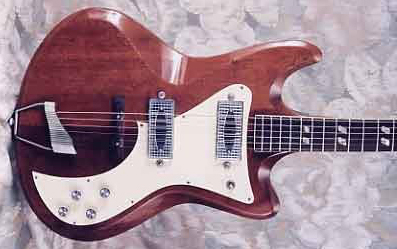 The head, as goofy as it is, isn’t the only impressive feature of the Titan. Those angled double parallelogram inlays are real pearl. Routing for those much have been fun. Then dig the body. Again with the bevels. Everywhere! On a two-piece solid mahogany body. With a good, tight, snug fit for the neck.

And, I guess while I’m complaining, who could love that awful plastic Kay logo? I guess someone did.

In any case, this all came together in 1965 to form the Kay Titan I, a remarkably nice little guitar despite it’s looks. Technically, the Kay Titan I lasted only one year, although it was still around as the Kay Titan II beginning in 1966, when the juke box company Seeburg purchased the company. Little other than names changed with the Seeburg possession, so they obviously didn’t have any objection to bushwhacking or plastic parts. But then again, have you ever seen a juke box? Also cool, but hardly models of high art or great aesthetic taste. More like, “Hey, look at me!”

Come to think of it, maybe it’s NOT the goofy headstock or plastic parts that make this guitar odd. Maybe it’s the really nice mahogany that’s the problem. Maybe the Titan I just needed some pink and green lights and a mirror-ball finish to complete the “Hey, look at me”… Oh well, let’s face it, if guitar designers didn’t come up with some klinkers once in awhile we wouldn’t have the fun of coming up with such goovy descriptions as Kleenex box and bushwhacker.